One of the bonuses of my new job is that I’m not only able to go along to many of the whisky tastings at the TWE shop in Vinopolis, but I’m half expected to so that we can write up the events on our blog. However, most of the time I’m backup writer and now that Toby from the shop has written up our most recent tasting I get to write about it over here. For this one it was especially fortunate that I managed to blag my way into one of the reserved seats as it was rather overwhelmingly oversubscribed. Luckily we predicted that and the right to buy a ticket was chosen at random from all the people who applied – over 300 for the initial 35 places. In the end we found a bigger room in the misleadingly cavernous expanse that is Vinopolis and managed to squeeze 50 people’s samples out of our tasting stock, and thus we had an Ardbeg tasting.

END_OF_DOCUMENT_TOKEN_TO_BE_REPLACED 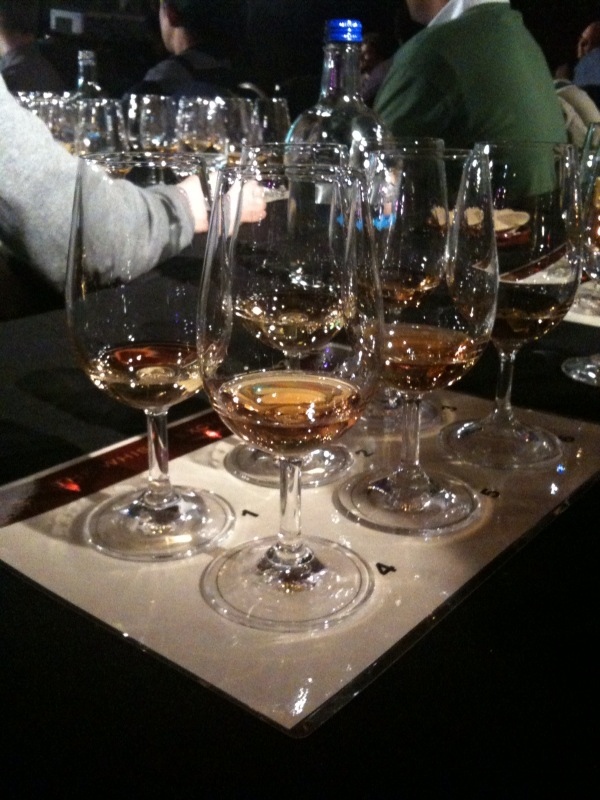 I don’t make many new year’s resolutions, but I decided this year that I needed to go to more booze tastings. After last week’s Talisker evening I managed to pick up a couple of tickets to The Whisky Exchange‘s first tasting of the year – a celebration of Glenmorangie, with Annabel Meikle, their inhouse sensory expert. It was held above TWE’s shop in Vinopolis and after a swiftie (of Schlenkerla Weizen) in The Rake I met up with Anna, whisky buddy extraordinaire, and repaired to the venue.

We were confronted with 6 glasses laid out before us and before we dug into them a bottle of Glenmorangie new spirit was passed around – whisky that was too young to be called whisky yet. I’ve only tried new spirit once before, having grabbed a couple of miniatures of Kilchoman which had been in wood for a week, and this was notably different. I’ve described the Kilchoman as tasting like a cross between cattle feed and death, with a creamy silage taste and peaty kick – I rather like it, although not more than a tiny dribble at a time.  The Glenmorangie barely resembled it – barely peated and never in wood, it had a clean crisp taste with a very light hint of peachy fruit. It tasted like a nice aquavit, drying and cooling on the tongue with a slightly malty aftertaste. Straight out of the freezer I suspect it would cause me great injury and from the large slugs that some of the other attendees were pouring the note I made of ‘MANY DEAD. SEND AMBULANCES’ was not that much of a jump in imagination.

As the bottle circulated Annabel introduced us to the distillery, including the work to increase capacity that has gone on there since my visit in 2004, and moved us quickly to the first whisky of the night – the Glenmorangie 10yr old. This used to be one of my favourite whiskies in the days before I discovered a love of peat, but I’ve not tried it for a while. Annabel explained how the flavour has been changed over the last few years, gradually altering the proportions of whiskies from new and second fill barrels until they got to the second fill heavy mix they have today. On the nose it was quite dry and biscuity, with soft fruit and caramel. This continued in the mouth with some nuttiness appearing, leading to short finish. Water brought out wood on the nose and sweetened the flavour, adding more woody vanilla and, after some prompting from our host, some coconut. It was quite a pleasant whisky, with some of the thick sweetness that I like, although quite restrained.

The second whisky was the Astar, the beginning of their range of more modern whiskies. Matured in designer casks, made from specially selected slow dried trees, after they’d been used to produce Jack Daniels (that last part, at least, a common theme in whisky making). I was quite interested to taste this one, as I’m quite sceptical when I hear of what seems to me to be too much attention to detail. It was similar on the nose to the 10yr old, but with less caramel, more wood and a peary fruitiness. It tasted interesting –  a dose of caramel and hint of banana, cooling on the tongue and fading to a mild bitterness. Water opened up the nose, bringing out more soft fruit and adding a creamy richness to the flavour and mouth feel. It was quite a delicate whisky compared to what I expected and I wasn’t too shocked by its unstated age of 8-9 years – a nice whisky, but not one that I’ll be seeking out.

Next up we had La Santa, the latest incarnation of the sherry finished Glenmorangie that I remember very much enjoying in the past – I think it may have been the first sherried whisky that I knowingly tried, and thus might be considered the beginning of my downfall. The original range of wood finishes was discontinued a few years back (I know of several people who are hoarding the last remnants of bottles of the port wood) and I’ve not had the chance to taste this new version as yet. This was a light gold whisky, richer in colour than the first two, and came from 10 years in regular oak and 2 finishing in oloroso casks. On the nose it was heavy and rich with caramel, although Anna reckoned it was crisp and green. It was quite sweet to taste with a hint of hazelnut and almonds, and a slightly creamy mouth feel leading to a fast fading flavour. With water the nose showed more fruit and a dash of vanilla essence and the taste became more citrusy with orange notes and a hint of tiger balm. The overall flavour for me though was hazelnut, which I didn’t particularly think went all that well with the other flavours. Annabel advised us to keep a little bit for later to compare against the more heavily sherried casks we were going to try, but I’d finished mine and didn’t feel much like revisiting it anyway.

We moved on to the second row and, from my initial sniffing, the ones that were more to my taste – darker more sherried drams. The first was The Sonnalta – the reason for the tasting evening and newest addition to the Glenmorangie range. This was the last whisky I’d known in advance that we’d be tasting and the one that I was most looking forward to – it’s finished in Pedro Ximinez casks, one of my favourite drinks of all time. I’d tried a few PX finished whiskies and been universally unimpressed with them, finding them to be uninspiring sherry finished whiskies, so I didn’t have much hope for this. Following the standard 10+2 first fill/wood finish maturation ratio this was a bronze whisky with a richly perfumed nose – vanilla and menthol that Anna likened to ancient Chanel No 5. To taste it was quite different – thick and spicy, with cinnamon, raisins and fruit cake. I noted down that it was meaty – a chewy whisky that had definite hints of PX to it. Adding water softened the nose, moving it more towards the fruit and caramel of the 10yr old, and opened the taste to more fruit without knocking out much of the richness. I rather liked this, tickling my sherry loving self as well as actually bringing some of the characteristics of PX. One of the ‘keep an eye out’ list. Annabel suggested that it would work well with food, suggesting the (by her own admission) obvious of choice of tapas. The flavour that jumped out to me was Morcilla, spanish black pudding. Umami-laden spicy rich blood sausage in spreadable form to match up with the spices, chewiness and meaty punch of the whisky. I may have to experiment…

Whisky number 5 was a bit of a mystery – Annabel described it as a bit of a Marmite dram, with there being two camps – loved or hated. A non production cask, hidden at the back of the warehouse with (former chairman) David MacDonald’s name stencilled on it, it’s occasional sampled for tastings. It’s currently at 10 years in regular barrels followed by 10 years in sherry. Legally speaking the length of time that a whisky needs to remain in a wood to be said to be finished by it is unspecified (leading to my profit maximising idea of pouring unfinished whisky through sherry barrels to add a super quick finish), so this whisky can still be claimed to have a sherry finish, although it is very much towards the extreme end. Unreduced it smelled of creme caramel with spicy cherries and tasted surprisingly delicate with dark chocolate and a light fruitiness fading to a slightly bitter end. Watered the nose showed more saltiness and the taste opened up to give more soft fruits and a nice fruit cakiness. An impressive whisky and a nice surprise to be able to get to taste.

The final dram of the night was one that some of the Whisky Exchange employees were glad to get a taste of – the £250 a bottle Quarter Century. A combination of whiskies from 25 years old and upwards, with a touch of oloroso finished spirit in there somewhere, it was a deep gold in colour and surprisingly light on the nose with hints of very dark chocolate and garibaldi biscuits. It tasted somewhat different with a muddled pile of flavours to start and a thick caramel sweetness leading to a strangely astringent aftertaste. With a touch of water the flavour widened, displaying hints of chocolate, berries, and a thick layer of slightly bitter sugar brittle. As refined in flavour as you would expect for the price, it’s not one for me to grab a bottle of but definitely one to sneak a dram of if you can.

Overall it was an interesting evening which has definitely had the effect of bringing Glenmorangie back into my mind. Even if I didn’t really get on with their new range of finishes it has kicked me towards the Sonnalta and shown me that they do have a good selection out there, much more than they used to, and are always looking to expand what they’re doing.

Glenmorangie Sonnalta PX
12 years old, 46%
PX finished (and sold out at The Whisky Exchange that night. Not to me, unfortunately)