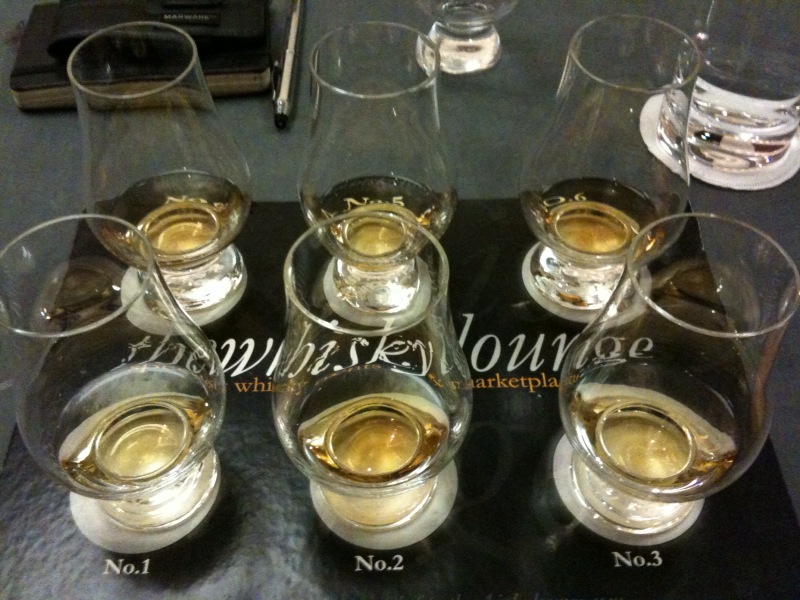 It’s a busy time of year for a man with a booze related mission, such as myself. All of a sudden tastings and shows are appearing from the woodwork, and last Saturday allowed me to combine both of those into one event – Whisky Lounge London. My tasting notes from the show floor are fairly worthless (although they may make a very brief appearance in a Quick Tastings, if I can decipher them) but I also signed up for the first event of the day, a tasting of Cooley whiskeys.

Cooley is the only independent distiller in Ireland, having been founded (as the traditional anecdotal story states) by some guys sitting in the pub and wondering why there were so many scotches and not as many Irish whiskeys. Despite having been much more popular than scotch during the first half of the 1900s the trials of two wars and prohibition took their toll on the sale of Irish whiskey and production shrunk down to only one working distilling concern, doing the distilling for all of the various Irish brands. In 1987 Cooley started up distilling on the Cooley peninsula and since then has also picked up the Kilbeggan distillery, claimed as the oldest working distillery in the world. They put out their whiskey under the names of older, now defunct, whiskey brands, with the core range consisting of whiskeys from Greenore, Tyrconnell, Kilbeggan and Connemara, not necessarily matching up the styles with the older versions (most of which are now forgotten) but doing something different with each brand.

Irish whiskey is currently one of the biggest growing segments of the global spirits market, with Pernod-Ricard pushing Jameson heavily in the US and Tullamore Dew (the second biggest selling Irish worldwide) recently being sold to William Grant & Sons for a respectable £260million. Ireland is a country with whiskey brands owned by holding companies with contract distilling along with the big boys, Diageo and Pernod-Ricard, owning most of the production facilities – there are no other independents and much of the tradition of making spirit seems to have been lost. It’s a very different environment to that on the other side of the Northern Channel and one that Cooley seem to be doing well in. The tasting was led by Stephen Teeling, part of the family who own the distillery, who’s based in London and seems to wander the country telling everyone how great Cooley whiskey is. I may be jealous. We were presented with 6 whiskies from the Cooley stable, showing the range of what they make. First up was a ‘welcome dram’ to keep us going while Stephen, by his own admission and in stereotypical Irish style, talked a lot. This was the Greenore Single Grain.It’s aged for at least 8 years and is currently the only commercially available Irish single grain. It’s made with 99% corn, rather than the cheaper grains you can often find in grain whisky, and matured in barrels from Heaven Hill in the US. On initial release they ran out due to an underestimation of demand, as there was no other product like it in the market, and I can see why. On the nose it’s quite perfumed but with the underlying alcohol kick that seems to be a trademark of grain whiskies. When you get over the punch to the back of the nose things calm down with roses and vanilla wood coming through. To taste it was light and sweet, with pear drops, rose water, boiled sweets and white chocolate, fading to a cereal finish. With water it became more sparkly, with vanilla and fizzy Refreshers with some apple appearing in the finish. To spoiler the rest of the article, this was my favourite of the day and I bought a bottle of it from their stand lateron. An excellent summer whiskey that would probably work when slightly chilled…maybe even with a piece of ice.

Next up was the Kilbeggan 15 year old, a premium blend named for the Kilbeggan distillery that is Cooley’s second production location. It’s also the more picturesque of the two distilleries, with the one at Cooley being a hard hat wearing industrial plant rather than the prettier Kilbeggan, which is also the site of the main visitor centre. The distillery, formerly known as Locke’s Distillery, is ‘the oldest licensed distillery in the world’, with their 1757 certificate hanging on site, and runs with a still bought from Tullamore, which is the oldest still in operation in Ireland – they are definitely pushing the oldness angle. The whiskey is a blend with a 35/65 malt/grain split, all aged for at least 15 years. It’s a premium blend (coming in at over £50) with an aggressively large bottle designed to stick out on the back bar – flat and wide with the name writ large. The aggressiveness doesn’t carry over into the spirit, however, with its style being similar to that of other premium blends – easy drinking and not too challenging. On the nose there is toffee as well as some of the floralness of the Greenore, a common note in Irish whiskeys we were told. To taste it’s soft with more toffee, flowers, a hint of the grain sweetness and some orange fading to a bitter finish. Water brings out more fruitiness and wood as well as amplifying the grain flavours. A good easy drinking blend, but not one that I’d spend £50 on (although my drinking companion eagerly grabbed a bottle).

We next moved on to the malts, starting with the Tyrconnells. Tyrconnell was at one point the biggest selling Irish whiskey in the world but, as with the industry in general, has now faded into memory. The first of the two we tried was the Tyrconnell Single Malt – a no age statement whiskey matured in Heaven Hill barrels for at least 5 years, with some 7 year and older whiskeys also in the mix. On the nose it’s salty with a some meaty umami, a hint of toffee and some sherbet citrus. To taste it’s lighter than the nose suggests with grass, apples, cereal, some aquavit-like caraway and a strangely meaty finish. Water opens it up with more sweetness but also enhances the savoury note that runs through it – chicken sherbet? One to try again.

Next was the Tyrconnell 10 yr old Madeira Finish – one of several whiskies in their wood finish collection. On the nose this was sweet with caramel and maybe a hint of acetone. To taste it was much more savoury, with red peppers and red berries. A touch of water unlocked some of the more traditional finish flavours, with vanilla, cinnamon and fruit through to a woody finish. The flavour didn’t dim much with water and it could take quite a bit before tasting dilute – an interesting and tasty whisky.

We then moved on to the more unique Connemara whiskeys – peated irish. With Ireland’s overly egged reputation of being one big peat bog you might expect there to be more peated Irish whiskey, but with the contraction in the market decisions were made and the older peated styles died out completely. Connemara is Cooley’s attempt to bring back some of the older flavours as well as having something that might compete favourably with the peaty Scottish malts. The first one on the table was the regular Connemara Peated – peated to 20-24ppm, roughly equivalent to having the malt smoked for a day, and with no age statement. On the nose there is sweet peat with crisp granite hint to the smokiness. To taste it has a light peatiness with a sweet malty middle and a peaty finish, although it doesn’ t have much to it (this could well be a sign of palate fatigue). With water it sweetens and there’s more fruit, but otherwise it maintains the peat/malt/peat profile of the un-diluted dram. Not my favourite, although maybe a good introductory whisky to someone who wants to explore peat.

The last whiskey of the tasting was the Connemara Limited Edition Sherry Cask, 9-15 year old whiskey finished for 24 months in Oloroso sherry casks. The nose was interesting with caramel, salt, old apples and, as one would hope, a hint of peat. To taste it had a fruitcakey base mixed with flinty peat smoke which prickled across the tongue. Water calmed things down a bit bringing out orange and frothy icing sugariness. Another interesting dram, and one I’d like to try again.

Since I heard of Cooley last year (rather than just the names of their whiskies) I’ve seen nothing but praise for their company and the whiskies they produce. They seem to be accumulating awards by the barrowful, with Kilbeggan recently picking up the IWSC Best Irish Blend award and Malt Advocate naming Cooley 2010 Distillery of the year, and it seems to be well deserved, with a wide range of interesting and tasty whiskey. I look forward to seeing what they come up with next.

Keep an eye out for other events from Whisky Lounge – the show was quite small but perfectly formed, with a big range of whisky producers and some very interesting drams to taste. Eddie Ludlow, Mr Whisky Lounge, puts on events all around the country and I’ll certainly be along when I next find the time to do so.