With two Whisky Squad sessions per month and my current reduced rate of bloggage the site does seem to be turning into a Squad record site, which ain’t no bad thing (I love double negatives). However, #28 is a session that is close to my heart, as it was my first foray into leading a tasting. The plan was simple – find a bunch of world whiskies that a) taste pretty good and b) people probably won’t have tasted before, and then c) present them to The Squad at Albannach. After finding that a few of my first choices are now sold out in the UK I did a bit of legwork and only missed out on one of my choices – Teerenpeli from Finland. It will be back and one day I’ll inflict its creamy goodness on the general populace, or at least a few select people who are nearby before the bottle is empty.

Anyways, this will be an abbreviated post as I was too busy waving my arms around to write tasting notes and my brain doesn’t store information anywhere near as well as my army of notebooks. So here are my speaking notes and some piccies.

Update: There are now also ‘tasting notes’ courtesy of Mr Matchett. Each whisky is also matched with a computer game…

END_OF_DOCUMENT_TOKEN_TO_BE_REPLACED 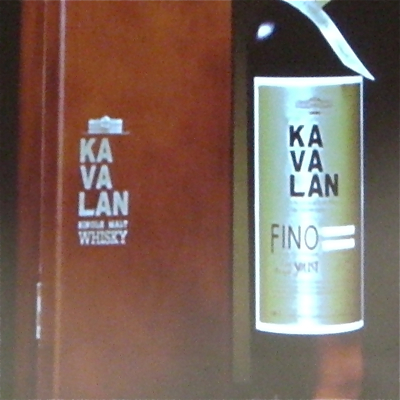 Part of my Christmas break always involves time on a train and due to a singular lack of easily readable books under the tree this year I am instead resorting to taking up more than my fair share of the communal table with my laptop to do a bit of catching up with the bits of my notebook that I haven’t got round to yet this year. This entry has been several months in coming and it’s a bit shaming that I haven’t done it earlier, as it’s about a quite important whisky tasting – Kavalan at The Whisky Lounge Festival in Manchester.

I’ve written a bit about Kavalan before but haven’t had a chance to try any more of their whiskies since then, so when Eddie Ludlow announced that he’d achieved a bit of a coup and got the distillery to exhibit at his Manchester show plans began to be made. I booked cheap train tickets to Manchester, getting there bright and early, and had a ticket home all in place when Eddie announced part two of his plan – Kavalan Master Blender Ian Chang would also be leading a tasting of the Kavalan range. A new return ticket was bought, the previous one departing 10 minutes before the start of the tasting, and plans to fill in a long morning of wandering around Manchester before the afternoon whisky session started to foment.

END_OF_DOCUMENT_TOKEN_TO_BE_REPLACED 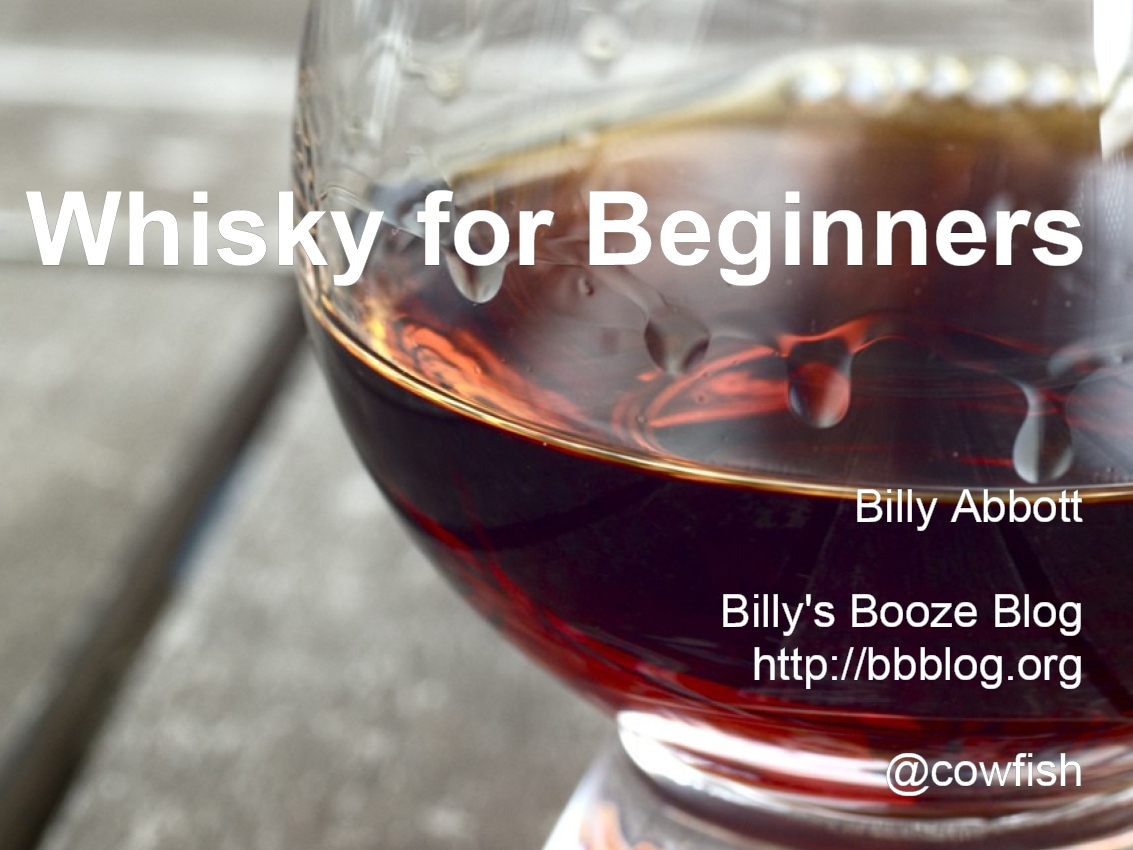 Despite the amount of time this blog implies I spend doing booze related activities I do also have a day job as a computer programmer. As part of this ‘secret’ second life I like to go and play at techy conferences and this last weekend I attended Barcamp London 8. Despite the potential of the word ‘Barcamp’ to refer to boozy activities (although there was a bar that I worked on and a lot of booze consumed, with drunken karaoke as the natural consequence of the latter) it is instead a free, community driven unconference, where there is no specific agenda and talks are all proposed and scheduled during the conference itself. While Barcamps are traditionally quite technical in nature they are not prescriptively so and I ran a session on one of my favourite topics – Whisky for Beginners.

Anyways, you can grab a copy of my slides (which get updated to make them more readable) from my website, although they were more a thing to have behind me on a screen than something filled with a load of information. Many thanks go to Rachel Clarke, who in a previous life worked at a distillery and knows a lot more about the making of whisky than I, who filled in some gaps and told me where I went wrong – it seems that my knowledge of grain whisky mashbills, amongst other things, is even more deficient than I thought…

Here are some links to some bits and pieces that I mentioned during my talk:

The whiskies I brought along were:

The unmatured new make spirit was from the Glenglassaugh spirit drinks range – Clearac and Peated. Both 15% ABV and £13.25 for a 20cl bottle from The Whisky Exchange.

Many thanks to all of those who came along. Please drop me a comment or email with any comments – it was my first Barcamp talk so any hints and tips are greatly appreciated. The talk has a page on lanyrd.com, so please add anything else you find about it up there.

It’s definitely not only Scotland that makes whisky these days. While the USA and Canada have been doing it for ages (even if they spell it differently), and India, the UK, Australia, Sweden and even Holland have joined up more recently, there are still a few more countries out there producing that we don’t often hear about. While Pakistan is maybe the strangest one, with them being a predominantly Muslim country where alcohol is almost entirely banned, another place that has recently started producing interesting whisky is Taiwan.

King Car, an all round food and drink company, decided in the mid/late-2000s (I can’t find an actual build date, but I’d guess that it’s after 2005) to branch out into producing a homegrown whisky. The popularity of whisky has been rising in the east for years and while part of the appeal is the status of buying imported drinks some of that was rubbing off on local produce as well. They enlisted the help of Dr Jim Swan, consulting distiller extraordinaire and also master distiller at Penderyn, amongst others, imported some stills from Scotland and built a distillery in Yilan City in the north of Taiwan. Taiwan is a fairly different environment to Scotland – it may rain a lot, but it does so while hovering around an average temperature of about 22ºc (with highs and lows generally ranging between 10ºC and 30ºC). This leads to much faster maturation, as the temperature aids the reaction between whisky and wood as well as causing much higher evaporation – about 10% per year as opposed to 2%. This in turn presents a dilemna – not only do you have to bottle a whisky before it gets too mature, you have to bottle it before it too much evaporates. In Scotland it takes a large number of years before either problem kicks in, with the evaporation generally leading to high prices that are accepted due to the long aging. However, with the active maturation and evaporation in Taiwan these dilemnas present themselves much earlier.

Currently they bottle their whisky at between 2 and 3 years old. In most markets in the world this means that they often can’t be called whisky (with 3 years being the minimum age before you can legally do so) but leaving it to mature for much longer isn’t possible due to accelerated process – an unideal situation. However, being a new distillery and having involved the right people they’ve put together a bit of a technological marvel and have produced whisky that has consistently shocked people who have drunk it. This recently came to a head with The Times slipping both Kavalan and St George’s English whisky into a tasting on Burns night in 2009, which led to the St George’s receiving favourable reviews but the Kavalan being crowned as ‘Best in Show’ for the evening, causing some consternation and a small flurry of column inches.

However, there is one further barrier in the way of us UK-bound folk who want to try out Taiwan’s finest – it’s not available over here. Currently, it’s available in Taiwan, some parts of China and in airport shops in some parts of East Asia. I only discovered the existence of Kavalan earlier this year (when it came up during the WhiskyCast Feis Ile series, as Dr Swan has been doing some work as Production Director at Kilchoman) and by the time I found out it was not readily available on this side of the globe my only Taiwanese connection had returned to the UK. I noticed that the folk at Whisky for Everyone had posted some reviews and when I asked them if they knew where I could get a bottle in the UK they unfortunately informed me that there was basically nowhere that I could. However, they sweetened that blow by asking if I wanted to try a bit of some Kavalan that they’d recently been sent – I of course jumped at the chance and said yes. While they’ve also reviewed the regular Kavalan over on Whisky for Everyone, this one was a newer more special bottling – Kavalan Solist Sherry Cask. They use a variety of casks at the distillery for maturation but this is a single cask, cask strength release taken from sherry casks after three years of maturation. It’s very dark in colour, with a deep red glow to it, and at first it doesn’t really look or smell like a whisky. On the nose it has prunes and PX-like concentrated raisins as well as some sweet marzipanny pastry and a hint of liquorice. To taste it isn’t as sweet as the nose suggests, but brings in some more marzipan to start along with sour plums, more concentrated vine fruit and some menthol, all leading to a long woody finish. A drop of water seems to make it even bigger, softening the wood and adding some butter to the finish and a creaminess to the mouthfeel. My flowery tasting note reads ‘like a light custard with stewed plums and raisins (with a slug of amontillado in the pot) stirred through with a dark wooden spoon’.

An impressive dram which I rather liked, although the nose was incredible while the taste was ‘just’ very good, and one that I would recommend to anyone who likes heavily sherried whiskies – it’s at the end of the sherry spectrum where it stops tasting like a traditional whisky and starts resembling brandies and sherries, but that’s something that I can’t get enough of. I’ve started organising (in my head, at least) a trip to the far-east next year and along with trips to some Japanese distilleries I now definitely have ‘Find some Kavalan’ on my list.

Many thanks again to Matt of Whisky for Everyone for letting me have a taste of this and, indirectly, to Ian Chang, head distiller at Kavalan, for passing some on to Matt. It seems that the folk at Kavalan are currently speaking to importers so we might have their whisky appearing in our shops sometime in the vaguely near future.