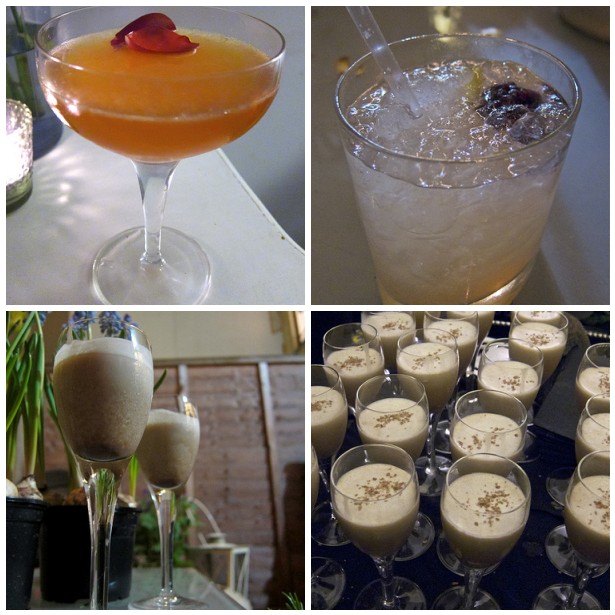 My occasional flirting with Qype and the London food blogging community leads to fairly random events popping up on my radar – this Tuesday I ended up at one. The idea of supper clubs isn’t particularly new: a bunch of people, some you know, some you don’t, turn up at your house and you make them dinner. The phenomena has entered my consciousness recently with the emergence of an underground dining movement in London (which veers from the ‘please kick in some cash for the dinner or at least bring me some presents’ to ‘minimum donation is £115. Please tip your waiter’ depending on the people organising) and the buzz that it has created online. However, I’ve not been along and hadn’t really considered it until I got an invite from the PR people behind a chunk of After Eight’s most recent campaign, focused around veteran supper clubber Jim Haynes. He’s been running Sunday night parties at his flat in Paris for the last 30 years and is a thoroughly nice chap – annoyingly I got to have a quick chat with him at the beginning of the night when I had no clue who he was or what was going on. Luckily the obsessive bloggers of Olde Londone Towne were present and there’s some video of him talking later.

Anyways, our hosts for the evening were Simon and Uyen (aka Fernandez & Leluu), rather lovely providers of meals to the randoms of London. Rather than their regular plan of doing a sit down meal for 10-15 people they went with a more Jim-style affair, ramming their flat with 40 bloggers and qypers and serving up plates of rather good food that could be eaten with one beforked hand. The food was rather good – starting on a mixed plate with a marvellous summer roll in the middle (that started a train of thought that ended with me face down in a bowl of vietnamese duck soup the next day), moving on to some excellent beef carpaccio surrounded by tasty trimmings and finishing with a solid glass of baked croissants with strawberries and cointreau (well, they said cointreau when describing the menu but it said whisky on the piece of paper I have – it was boozy and delightful [and cointreau, I reckons]). As usual, my eye turned towards the bar. Not knowing much about the traditions of supper clubs I arrived empty handed, rather than with the bottle of wine (at least one) which is The Proper Thing To Do. Luckily this had been considered and Johan Svensson of DrinksFusion was on hand to supply us with cocktails all night. We started off with some prosecco or a Bellini. I initially avoided the cocktail due to the Archer’s stained memories of working in a bar at university – after a night of making jugs of Sex on the Beach for drunken rugby players the fake peach stench of Archer’s sticks to the skin, a smell that taunts me to this day. However, after a quick chat with Johan I was tempted in – pinky peach puree with prosecco, a touch of real peach liqueur and crisp slice of peach. Not even a hint of fakeness, it wasn’t particularly sweet, with the prosecco toning down the mild sweetness of the puree and even the garnish working as a contrast – suffice to say I liked it.

After the food appeared, the sky appropriately darkened and a cocktail menu appeared on the bar. I am much remiss in my duties as I didn’t get through all of them (nice people were talking to me, which is very annoying and gets in the way of the drinking. I am prepared to forgive them on this occasion), missing out on the Spring Tom Collins (Gin and lemon juice with elderflower cordial and soda, served in a long glass over ice). While we tucked in to our starters I had a chat with Johan about the wonderful world of booze and he has annoyingly added more things to my ‘find and taste’ list – agave tequila, interesting rums, genever and dutch liqueurs. My annoying eye for faces (but without the accompanying mind to remember where I’d seen the face) kicked in and it seems that I’ve probably bumped into him at Whisky Live on one of my pair of attendances, probably serving me some rather good Van Winkle bourbon. That reminds me, I need to stock up on bourbon…

The most popular of the other drinks on the menu was the Rose-Club Cocktail, and after a chat with Johan earlier about the secret ingredient I was keen to try one – Gin shaken with vermouth, rose liqueur (‘secret’ ingredient), raspberries and lemon juice, sweetened and soured with simple syrup and campari respectively, and then served straight up in a coupe with a pair of rose petals floating around. It was interestingly sweet and sour with an undercurrent of rose running through it. It was a touch too strong for my liking, though, but I can forgive that as Johan was in production line mode, pumping out cocktails by the jug – a couple more shakes and I suspect it would have been excellent.

I’d not tried rose liqueur before and I think the one in this cocktail was from the Wees distillery in Amsterdam – it’s made in small runs with a combination of distilling with roses in the still and later maceration, with flowers from an old rose gardener who specialises in old fashioned varieties with interesting aromas. It was specially liked by Niamh, who had been trying to get a rose flavour into a cocktail a while back with little success, as rose water didn’t quite cut it – this really does add an interesting slug of rosiness to whatever it touches.

Next I tried a Bramble – another on the ‘by Dick Bradsell’ list, this is a London cocktail bar mainstay (having been invented here) and one that I have rubbishly never got round to trying. Gin and lemon juice sweetened with a drop of sugar, stirred with ice, floated with crème de mure, and garnished with a blackberry and a curl of lemon peel. It tasted exactly as one would expect, with the sourness of the lemon juice tempered by the crème de mure – it’s gone onto my list of cocktails I will consider ordering, despite it containing way too much non-booze for my liking…

To finish off the evening, and to keep the corporate overlords happy, the After Eight Alexander was rolled out – cognac shaken with melted After Eights, vanilla and cream, served straight with a dusting of chocolate. This was surprisingly nice, with the richness I was expecting cut by the booze to give almost an After Eight scented liqueur chocolate filling, after you got through the creamy head.

Anyways, it was a good night – a weird mix of mate’s party and formal event that worked well. Anyone going to Paris with a Sunday to spare should look into going to one of Jim Haynes’s parties, he’s a lovely chap with a pile of stories and the streak of awesome madness that hosting parties for randoms every week for thirty years suggests.

This post was powered by an explosive bottle of Hop Back Taiphoon and an alarming percentage of a freebie box of After Eights.
Many thanks to Simon of Fernandez & Leluu for looking after my camera when I left it behind and then offering me booze when I went to collect it.
There are some more write-ups on the interwebs: Qype, London Eater, Domestic Sluttery