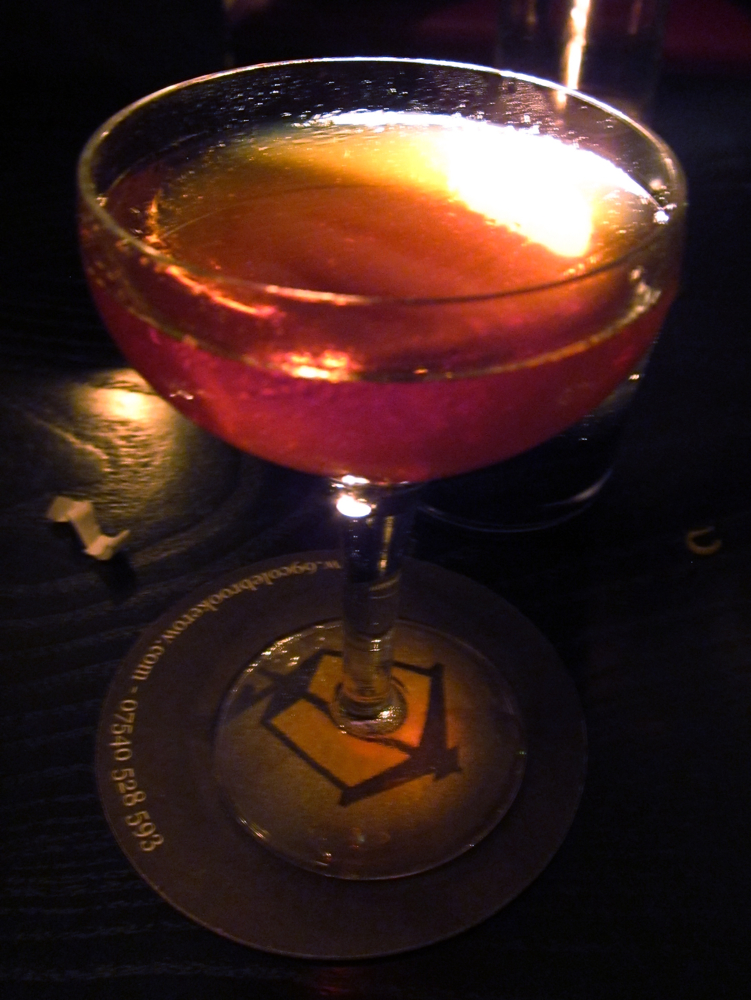 A few months back I saw on Twitter that a few of the cocktail lovers who I follow were talking about having meetups for London based cocktail fans and, as I do way to often, I asked if I could join in. The first official meetup of the now named London Cocktail Society (I think there was a premeeting last month) was set for September 8th at 69 Colebrooke Row.

69 Colebrooke Row (the bar’s address, not its name – it deliberately doesn’t have a name) is a small room next to The Living Room, just off Essex Road in Islington. It’s the new home of cocktail barman Tony Conigliaro, famed for various drink inventions and his more ‘molecular gastronomy’ style approach to cocktail making. From reading about Tony it seems that having worked in restaurant bars he started being interested in the modern cooking methods that he saw in the kitchens and started applying some of them to cocktail making.

To this end they make a lot of their own base ingredients at 69 Colebrooke Row, with the upstairs of the bar hiding a low ceilinged lab, full of bench gear for both production and experimentation. Part of the LCS visit was that Tony offered to take us all upstairs, in small groups as it isn’t all that spacious, and show us what he does up there. Due to the distilling laws allowing limited redistillation of already distilled alcohol (which I need to investigate more before buying things to blow up my kitchen – I was offered the chance to add a small still onto someone else’s order the other day and I was very tempted. I said no) Tony has two vacuum stills and one whose name I forgot but looked a bit like a column still. He uses these to produce various flavoured liquids, both alcoholic and water based. The low temperature that the lowering of atmospheric pressure enabled by the vacuum stills allows leads to the various ingredients in the distilling liquid being handled delicately and not cooked as much as they would be at a higher temperature. This leads to much more delicate products and different flavours being pulled out into the various liquids.

For example, their vodka, which they now sell over the bar for £12 a bottle, is made by grating horseradish into the base spirit (which I assume is vodka) before redistilling, which produces a great horseradish spirit that puts my experiments to shame (as I would hope, as I am not a cocktail expert with a lab above my own bar). On the nose it has crisp horseradish, as if you’re sniffing the surface revealed by snapping a root in half. To taste it has a butteriness mixed in with a light heat and vegetable bitterness, that lingers with the heat long after you swallow your drink.

Along with the horseradish vodka they also had a rose hydrosol (a water based extraction), which perfectly captured the smell of roses as well as the taste of flowers, some rhubarb vodka (for which they cook the rhubarb sous-vide to break it down before mixing with base spirit and redistilling) and vacuum bags packed with various things ready for experimentation, including wood chips. Outside of drinks there were also jars of green beans, pickling away in a variety of vinegars ready to become the final piece of their upcoming bloody mary (along with horseradish vodka, carefully constructed tomato juice and a black pepper tincture). I want a lab to construct drinks in…

After our lab tour I grabbed a couple of drinks, as it seems rude not to when visiting a bar. Drinks are £8 each for house cocktails, although the menu does also offer classics on request, and presentation and creation are predictably excellent. Behind the bar on the night we visited were Matteo and Ryan (who I’d heard tales of from SMWS staff as he worked in Bramble in Edinburgh before coming down to London after being crowned UK Best Bartender last year) and they calmly coped with random requests (with LCS co-founder Mark asking for ‘whatever you think would be nice’ from both of them over the evening).

I started with a Liquorice Whisky Sour, made from Cutty Sark whisky, Lemon juice and liquorice syrup. It was a beautiful drink, with a thick off-white creamy head covering the orangey liquid. It smelled of liquorice and smoky lemons and was an excellent balance of the whisky, citrus and sweet liquorice. Unfortunately, I’m not a fan of malt whisky in cocktails, with most of the delicate flavours being overwhelmed leaving just the general whisky-ness. In this case the wood and smoke were nice additions, but it didn’t quite work for me. However, I did use the idea to make my own version last night: 50ml Woodford Reserve bourbon, 50ml home-made sour mix, 15ml liquorice vodka. It needs some work as the sours and vodka made things a bit sweet, as I use sweet soft liquorice to make my liquorice vodka. Luckily for me Tony gave me one of the liquorice pastilles that he grinds to garnish the Liquorice Whisky Sour to try, after I mentioned that I also wanted a centrifuge (his current Most Wanted piece of lab kit) as I’d been running my latest vodka experiment through coffee filters for a couple of days, and I see potential in making a sour liquorice spirit using them. For now I’ll make do with garnishing my drinks with crushed liquorice pastilles, as obtained from the Algerian Coffee House in Soho, as they do at 69 Colebrooke Row.

I followed this up with a Manhattan. However, Manhattan’s at 69 Colebrooke Row aren’t as simple as they sound. Tony is one of the increasing numbers of barmen who have been experimenting with barrel aging cocktails and the Aged Manhattan is one of the bar’s signature drinks. I foolishly didn’t ask how long it’d been aged for, but it’s probably somewhere between 6 months and a year. The creation is quite simple if time consuming (assuming Tony does this the same way as other bars) – the ingredients of the Manhattan (whiskey, bitters and vermouth [dry, sweet or a mixture depending on whether you are making a dry, sweet or perfect Manhattan]) are mixed without ice and then poured into a wooden barrel to mature. When they have reached the required age they are bottled and the drink is made by stirring the premixed cocktail with ice before serving. Having not tried a regular Manhattan at the bar I can’t say too much about the differences in the aged drink, but suffice to say it was the finest Manhattan I’ve ever tried – starting with a sweet kick before fading through spicy whiskey to a rounded dry vermouth finish, it was very good. I don’t think it’s picked up much from the barrel but it was very mellow, with the flavours of the ingredients well matched, quite distinct and very well balanced. They’ve just finished a 6 year old version, but as there was only one bottle and it was on the bar on Thursday I suspect it may already be gone…

It’s a strange place and not at all what I expected. The room is quite small, making me wonder how exactly they’d fit in the 40 people that is listed as the capacity, and the bar itself is also small, with barely enough room for the two barmen to move around and make drinks. Along with that it can get quite loud, with background music and a big crowd making it difficult to have conversations. However, at the same time it’s significantly quieter than most other cocktail bars and the close quarters adds to the atmosphere. The service is as impeccable and friendly, and the drinks are really very impressive, showing the bar team’s skill and love of experimentation. It’s not somewhere that I’ll be visiting every night, but there are some menu changes appearing in the near future and I’ll definitely be wandering down to see what craziness has appeared.

69 Colebrooke Row
House cocktails £8. Nibbles available.
They have a blog with announcements and other randomness.

Many thanks to Mark, Emma and Kate of The London Cocktail Society for organising the visit. If you want to come and play you can sign up on the site.