My buying of almost everything that BrewDog produces is a potential problem. Keeping an eye on their blog and receiving the occasional “as you are a shareholder you may be interested in” email is a dangerous thing as I hear about their more interesting brews before they get a chance to sell out. And sell out they do…

One of the most recent ones of these to appear is their latest collaboration with Danish brewer Mikkeller – I Hardcore You. Unlike their previous brew, Devine Rebel, this one isn’t a single beer collaboration but instead a blend of a beer from each brewer – BrewDog’s Hardcore IPA and Mikkeller’s I Beat yoU. After they’ve done the blending of the two breweries’ most hoppy ales they then dry hop it to make sure it’s hoppy enough. And then they dry hop it again. As they said on the blog post announcing the beer:

…a beer which has been dry hopped four times, or maybe even six times. We kinda lost count.

It’s a little bit of a cheat as I Beat yoU (with capitalised IBU) is made at BrewDog’s brewery to Mikkeller’s recipe, so they don’t have to ship it all that far before doing the blending. I’ve written about Hardcore IPA before (and still need to try another bottle of it, as my last one seems to have been duff) but I’ve yet to taste I Beat You on its own. From Mikkeller’s website it seems to be a beer with a simple mission – to be a really hoppy IPA. Based on my impression of this beer they seem to have done that.

The blend comes in at 9.5% and for a beer that strong it slips down way too easily – I’ve already seen reports of hangover misery the morning after The Rake had a cask of it on. It pours a nice orangey red and has a head that sticks around for a little bit. It smells of hop pellets and mulchy hops, a bit like being in a damp hop filled cellar (I imagine). I’ve tried two bottles, one cold and one at room temperature, and the flavour was quite different. At room temperature it was very hoppy with an underlying thick maltiness that reminded me of the best bits of the draught Hardcore IPA. When cold more of the maltiness came out than the hops, with it coming across as very sweet and fruity (mangos, pineapples and other tropical fruit, maybe) with a nice long bitter finish, becoming gradually more mulchy and hoppy as it warmed up.

As with all of the BrewDog backed hoppy beers this isn’t one to have if you are not a big fan of bitter hops. Luckily for me I like the taste of chewing on a hop pellet, so the extra flavours that you get from the beer sitting behind the hops all count as bonuses. While this beer may not appear again (although the ease of BrewDog obtaining both Hardcore IPA and I Beat yoU combined with the favourable reviews this beer has got mean that it’s not impossible that it will) it certainly reinforces my need to try Hardcore IPA and kicks the Mikkeller range further up my to find list.

BrewDog and Mikkeller I Beat You
Double dry hopped blended of Hardcore IPA and I Beat yoU, 9.5%. No longer available.

The bottle artwork is by Keith Shore, and very pretty it is too. 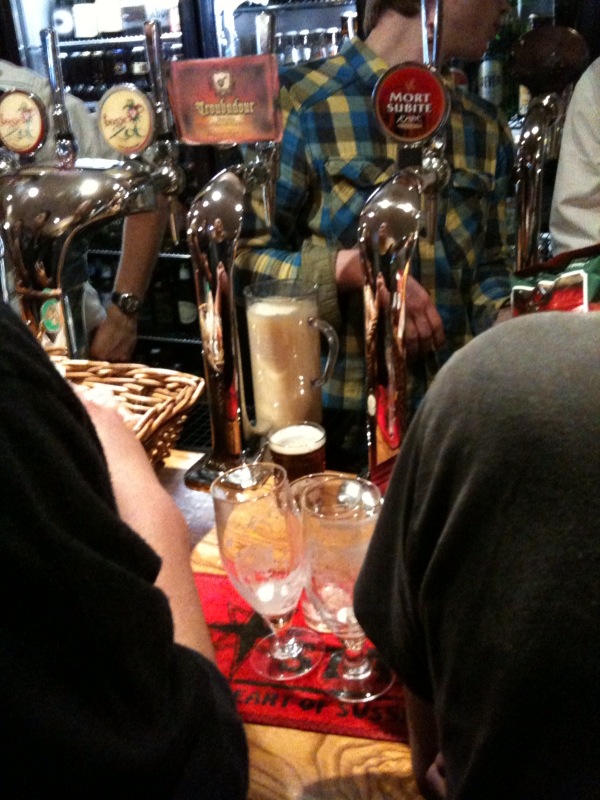 I still like Brewdog. I may be in two minds about some of their marketing and some of their beers, but they’ve so far all been worth a try. So, when I read on their blog that they were going to have a release event for one of their latest beers in London, putting on the only cask of the otherwise bottled beer and might bring along some interesting other things to have a taste of the date swiftly went in my calendar.

The beer in question was Brewdog Abstrakt:02, part of a ‘range’ of beers with a simple ethos – only one batch of each will be made, once it’s made the recipe will be retired, and each beer will simply be named as Abstrakt: with the next number in sequence. The Abstrakt:01 is a slightly mad 10% abv vanilla infused belgian quadrupel and the #2 is both a more conventional beer and also slightly more scary – a triple dry hopped imperial red ale (more conventional) at 18% (saywhatnow?). The release event was at the Cask in Pimlico, a pub that I’ve been meaning to visit for a while. Formerly the rather dodgy Pimlico Tram, it’s been taken over and redone as one of the new wave of pubs focusing on good beer that have been popping up in London. Upgrading their gear since the reopening they now have a bar packed with hand pulls and taps, with a constantly changing range of real ales and keg beers. Behind the bar is their latest addition – tall fridges stacked with interesting bottled beer. I suspect they are one of a small number of bars, if not the only one, who have Brewdog’s Tactical Nuclear Penguin (32% and ~£60 a bottle) and Sink the Bismarck (41% and over £70 a go) ready to sell.

While waiting for the Abstrakt to appear, me and drinking buddies Ewan (who was randomly sharing our table until we both realised that we’ve met on a number of occasions) and Alan decided to try out a few of the other beers on the bar:

At this point a bell was rung and Brewdog’s sales guy, Richard McLellan, strode amongst the throng delivering an occasionally drowned out tribute to the glory of their beer. Then the scrum faced the bar and drove… The crowd did move quite slowly at first, as even though it was being sold in third pints the beer had decided that it liked being head rather than liquid, and a chain of jugs and spoons for flicking off the foam was quickly formed. At £3 a third it was far from being cheap, but it was a) the only keg of the beer in existence and b) 18%, so I forgave them.

The Abstrakt is a deep red/brown beer which (as the pouring misery demonstrates) popped up with a good head to start, which quickly faded in the glass. On the nose there was lots of orangey citrus with an undercurrent of slightly stale hoppiness. To taste the alcohol came through quite quickly, fading to a bitter citrus hop finish. There were hints of vanilla at the back of the mouth and the citrus of the hops was joined by a berry fruitiness in the centre. However, in the end I found it a little unbalanced towards the bitterness of the hops. They recommended that Ab:01 be cellared for 1-2 years and I wonder if that could be a good thing for this one as well – a bit of rounding of the bitterness as well as bringing out more of the orange and vanilla could balance this a lot more for my taste.

Shortly after this a tray started making its way around the pub, containing small tumblers with a shot of a slightly murky brown liquid in, the second reason I had come down – a taste of Sink the Bismarck. The beer was created as part of a mini-war between Brewdog and German brewer Schorschbräu, which started with Brewdog pushing the 31% Schorschbock into being the second strongest beer in the world with their 32% Tactical Nuclear Penguin. The germans came back with a 40% version of their beer, only to have the Scots go one stage further with both the 41% Sink the Bismarck and a bit of Brewdog style marketing:

It seems that Schorschbräu have fought back with last month’s 43% version of the Schorschbock (complete with ‘rising to the bait’ tagline of ’cause Frankonian Men don’t dress like girls’) so we shall see what Brewdog come back with.

The Bismarck is a many times hopped beer which is chilled in an icecream factory before having the ice removed and the process repeated a number of times. This is more of a freeze concentration than a freeze distilling, removing all of the warmer freezing elements in the beer and leaving something that is not entirely unlike beer cordial. On the nose it was quite powerful, with lots of booze, as you’d expect, a touch of hops and some (butch) floweriness. To taste it was a bit of a punch to the face, with a burst of malty fruit and icing sugar fluffy sweetness fading through sour berries to a warming, malty bitter finish with a hint of wood smoke and orangey hop. It’s one that definitely has to be sipped and it’s really not a whisky – the whisky distillation process takes out most of the flavour compounds that are deliberately left in here, creating almost an anti-whisky in approach and flavour. I have a bottle of Tactical Nuclear Penguin at home and, impressive at it is, I don’t think I need one of these as well (although if the Penguin doesn’t live up to expectation I may have to visit the Brewdog shop and lay down a scary amount of money for a bottle).

Alan and I ended the evening on a half of the Hardcore IPA, a fitting end to eject us, slightly swaying, into the street. As usual Brewdog’s beers are a bit hit and miss for me, but both they and the Cask require further investigation.