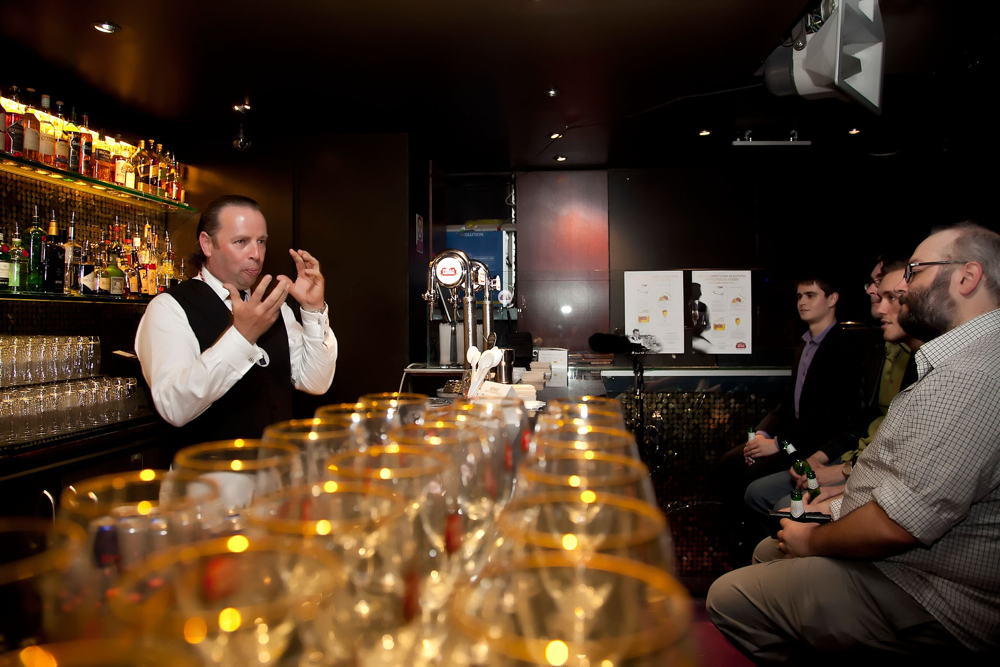 Over the years, being someone who occasionally drinks yellow fizzy beer in the UK, I have consumed my share of Stella Artois. It’s a not particularly interesting, yellow fizzy beer that has more flavour to it (and alcohol) than the non-premium Carlsbergs and Carlings of this world. It’s been folklorically linked with domestic violence, both with its nickname of wife beater and urban legends of it being dosed with chemicals that inspire punchups (other than alcohol), and its general on the street image seems to be quite different to the refined elegance that InBev’s numerous advertising campaigns push. Despite our domestic needs being met by UK brewed product, it comes from a fairly long lineage and is still brewed in its home in Leuven, Belgium, as well as in many other countries around the world. Depending on how much you believe either Wikipedia or InBev’s fearsome marketing department there has been brewing in Leuven since 1366 and the Artois brand (named after the head brewer at the time, Sebastien Artois) since 1717, although Stella itself is a more recent invention, having appeared in the 1920s. Over the years Stella’s popularity in the UK has pushed it from being an imported continental lager to being yet another continental style beer brewed in industrial quantities much closer to home.

However, Stella Artois is a huge beer brand and one that is often put behind interesting campaigns. The latest that has appeared on our shores is the Stella Artois Draught Masters – a yearly competition to find an individual who knows how to properly pour a glass of beer and present it to the customer. Never mind any misgivings I may have on the part of the liquid going into the glass, this is something that I very much approve of. Having been a barman for 3 years (even if it was behind a student bar) I am very keen for ‘proper’ service to be more of a norm in the UK rather than something that shocks when it appears. Even if you are pouring hundreds of pints of cheap tasteless tat to students on a Friday night I am still of the opinion that you should maintain a level of service and knowing how to pour a beer is part of that. A lot of effort in pouring pints is often focused on real ale. It is, surely, much more complicated, with the hand pump and people drinking it being bearded and critical and all..? I would say not – pouring a decent pint of lager is just as difficult: it’s more than just turning on a valve and stopping it when it’s done.

Photo by the official photographer

Assorted competition winners, journalists, bloggers and VIPs gathered in the depths of the Cuckoo Club, off Regent Street, to learn the perfect Stella pour from beer sommelier (complete with medal worn around his neck to prove it) Marc Stroobant. Marc’s brief was simple – tell us the hows and whys of pouring a perfect glass of beer and then help us to do the same ourselves. The steps to pouring the beer were quite simple:

Here’s Marc talking us through the technique:

This is all good advice and has good reasons behind each bit. Firstly, making sure your glass is clean is obvious, but having rinsed it before hand you will also make the beer foam up less, as a wet glass causes less head to form than a dry one. Secondly, the angle of 45 degrees allows the beer to run down the side of the glass at a good rate while not coming out the top or hitting the beer in the glass directly, which will cause it to foam up quickly. The skimmer technique was a piece that I’d not heard before, and definitely something I’ll remember. Firstly, skimming with the direction of bubble flow is common sense – it means that you are merely assisting the excess bubbles to flow over the side of the glass, rather than spreading them around all over the place. Secondly, skimming at all was explained as helping the shape of the beer in the glass – you don’t want a flat top, but skimming the beer while the head is still rising allows it to rise in an even fashion, removing the big bubbles that form at the top and giving an attractive dome of closely formed foam on top of your beer.

The head of the beer is all important, even if Marc did acknowledge that in the UK the style isn’t to have anywhere as near as much as on the continent, and tap technique is a big part of that. Turning the tap on fully means that the beer will come out ‘properly’, as that’s how the tap is designed. Turning the tap on part way will force out a similar amount of gas with a smaller amount of beer, making foam in a less natural way (although, as the beer is generally flat and regassed through the delivery system it’s all fairly ‘unnatural’). This is a useful trick if you end up pouring a headless pint, as even in the ‘top that up’ culture of British pubs you want a bit of head on your beer to distinguish it from dishwater – stick the tap in the glass and give it a quick tap and you’ll end up with a foamy pint, even if it won’t taste quite as good. Marc also explained the reason behind that – the head of the beer is not flavourless, trapping a lot of the bitter hoppy elements of the beers flavour, which is why on the continent it is tradition to make sure there is a good head to drink you beer through to add an extra bitterness to the beer as you drink it. Also, Carbon Dioxide, our fizzy friend, is also not tasteless, adding both fizz to beer as well as bitterness. So, adding an extra squirt of carbon dioxide to your beer will make it more bitter than if you serve it as the brewery intended. A debatable point, but definitely one that was born out during the session when tasting a ‘properly’ poured pint and one which had been poured ‘Mr Whippy style’.

The final two pieces are not things that you’ll see on a list to necessarily make the beer taste better, but they’re very important for two reasons. There is the obvious branding side of things, sticking a logo, branded beer mat and beer doiley in the customers face, but there is also a service side – it’s nice to receive a drink that is well presented, placed carefully in front of you on a mat by a member of staff who says ‘here is your drink’, rather than dumped on the bar by someone asking you for money.

All in all I quite like the approach that Marc taught – it’s one that while not appropriate in detail to most pubs in the UK contains information that should be appreciated by all bar staff – pour each drink in a way that makes the drink taste its best and present it to the customer in a way that shows a high level of service. Whether it’s in a fine cocktail bar, placing carefully prepared cocktails on silver coasters in an obtrusive manner, or just handing over a well drawn pint with a smile, it’s something that I’ve seen in bar staff in many countries where bar-tending is seen as a worthy career but not so much in the UK, where it’s so often seen as something to bring in cash until you can get a ‘proper job’. Anyways, rant over. My only real issue with the lesson was the liquid that went in the glass. It’s not that Stella is bad – it’s not great, but it’s significantly better flavoured than many of the cooking lagers on the market. My issue was with the serving. I’m not sure if it’s folklore or not, but I’ve heard that Stella brewed in the UK market is different to that brewed on the continent, as tastes (and head sizes) vary. My first attempt at pouring came out as a traditional UK pint – fizzy and with a minimal head. I tried to skim it and there was nothing to remove above the rim of the glass. Marc gave me a sad look, asked if I wanted another go and poured it down the sink. My second attempt was much better, with a decent head (smaller than a continental one, but within the tolerances set by Mr Stroobant), but the problem was simple – it didn’t taste very nice. The head was good and hoppy, but the beer itself was flat and overly sweet. Without the carbon dioxide fizzing through the beer it became significantly less pleasant, and whether that was because the beer wasn’t gassed enough due to the UK style of pouring, the cellar system at the Cuckoo Club wasn’t set up right, my tastes don’t stretch to sickly beer or that I just didn’t pour it correctly (likely, but I don’t think pouring it better than I would have made much difference) the glass of beer that I drank wasn’t as nice as a fizzy pint. I’ve since seen a more involved ‘How to pour Stella’ video where they emphasized the keeping of CO2 in the beer, but even with this acknowledgement I’m not sure what went wrong with the beers I tried that night.

But my opinion of a beer that I’m not much of a fan of anyway isn’t important. The thing that I found most interesting about this was the fact that InBev are pushing, through their most well known premium branded product, the idea of professionalism when pouring drinks. I suspect it won’t filter down through the brick wall of British bar culture but the fact that they are trying at all made me happy.

Many thanks to David at Fleishman-Hillard for inviting me along. Annoyingly I ran off early as I’ve heard that the party continued for a bit and was rather good.