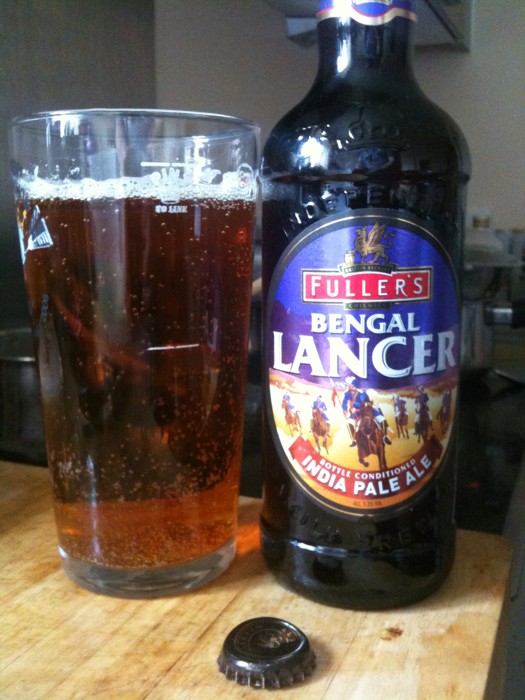 Some more of what I done been drinking:

Balvenie 12 Years Doublewood – a whisky grabbed as a chaser round the corner from the Sci-Fi-London film festival after a day of packing bags and herding punters. It had a grassy, olive oily nose with hints of sugary spice and a touch of wood. To taste it had a woody sweetness with some cinnamony spiciness with a bitter fruity finish. As it developed in the glass the sweetness increased and turned towards candyfloss.

Thatchers Old Rascal – I popped into the branch of Byron Hamburger that’s now hiding in the building that used to house The Intrepid Fox (I may never have drunk anything but Newcastle Brown or bottled cider when visiting, but RIP anyway. The new location just isn’t the same) and grabbed a quick bottle of cider to accompany my tasty burger. Described on the label as ‘Full bodied medium dry Somerset cider’, I would have stuck it more towards the medium sweet end of things. Anyways, it was quite nice – more mulchy farmyard flavour than you usually get from a mainstream cider as well as a nice tartness contrasting with the underlying sweetness. One to remember.

The SMWS release a new tranche of whiskies every first Friday of the month, so I stopped by to try a couple. Well, more than a couple after I got talking to the bar staff…I am weak:

SMWS 35.38, Fire in the hole! (Glen Moray) – Chosen specifically because of my interest in strange wood maturations, this one was matured for 9 years in a 2nd fill chardonnay cask. Wine finishes are generally badly thought of by whisky connoisseurs, but a few interesting ones do get out into the wild – this one is a bit of a mixture. A strange nose, with a slab of wood as well as a strange chicken and ammonia combination (to be honest there was a hint of the pub bog to it). To taste it was almost meaty, with overripe fruit and a bitter woody finish. With a bit of water it softened out, becoming more wine-like with some vanilla from the wood and an oily sandalwood flavour coming through. One to try, but not one I want a whole bottle of.

SMWS 93.38, Stirs the atavistic soul (Glen Scotia) – The intended final dram of the evening, this was to sate my love of Campbelltown whiskies, although as there are only two remaining distilleries, Glen Scotia and Springbank, this is quite a limited love. Luckily Springbank have a couple of brands they distill giving a slightly wider field for me to taste my way through. Anyways, this reminded me, from my notes, of a damp wood fire in someone else’s garden – smoke at a distance with a touch of damp woodiness. There were sour grapes and cured meat on the nose as well. To taste there was a touch of sweet wine as well as tannic wood, almost like a fruity rioja. A drop of water softened the wood, bringing out more sweetness and hiding the tannins. Overall the main memory I have is of a tingling menthol like finish down the sides of the tongue. Quite definitely from Campbelltown and really quite nice.

SMWS 27.80 (Springbank) – no name for this one as I can’t find it on the website. Continuing the Campbelltown kick I went for a recommended dram of this new (I think) Springbank. It had salt and a light sweetness on the nose, as well as a plimsoll-like rubberiness. To taste it had more salt and rubber as well as a sweetness and a prickly, numbing sensation. Water brought on more sweetness and a slick, buttery mouthfeel, along with more rubber and fisherman’s friends. It reminds me very much of the bottle of single cask Springbank I got from Cadenhead’s while at the Edinburgh Festival last year, although this one is even better. I may have to pick up a bottle on my next visit.

SMWS 53.140, Swelling, crashing, waves of flavour (Caol Ila) – a deliberate evening ending choice, although I was offered an even more peaty Ardbeg by the ever helpful barman. I declined, but made a note for my next visit. On the nose it had a sweet peaty smoke with a hint of disinfectant, mulch and parma violets. To taste it was crisply smoky with candy floss and citrus fruit, but rather complex and overpowering and in need of dilution. Water saves your palate from certain destruction, with the flavours combining to give a sweet wet ash smokiness, a touch of orange and a tingly finish. It’s good I stopped after it as I was still tasting it when I got home an hour later.

And my favourite of the week:

Fuller’s Bengal Lancer – I’ve tried this IPA on tap, but not grabbed a bottle yet, however, I’m glad I did. It’s a bottle conditioned, very heavily hopped IPA which is light on the palate but still wonderfully bitter, with the great taste of citrusy hops dominating in a rather pleasant way. As the hops die back there’s a nice touch of fruity malt and it finishes with the same bitterness that most Fuller’s beers display. Very good and one that I’ll be stocking up on when I find someone to drive me to the shops.