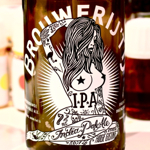 One of the things I’m still getting used to now that I’ve met a bunch of boozey people from outside of the UK is that international post is a real thing that actually works. I’m allergic to post offices and am generally rubbish at sending letters and parcels, so Maltstock was a very useful thing for me as it meant I could not only meet up with some of my non-local acquaintances but also handover some goodies. I mentioned on Twitter that it would nice to have the transation be bi-directional and next thing I knew Sjoerd from Malt Fascination was pressing a bag of beer into my hands. Annoyingly I managed to leave his (rather good) coffee IPA homebrew in The Netherlands (something which should be remedied soon as he is much more of a master of the postal system than I) but I still managed to stock my beer shelf with a selection of Dutch beers as chosen by him.

First up to be tried was the Amsterdamse India Pale Ale from Brouwerij ‘t IJ.