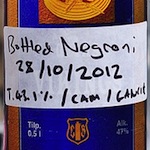 Having a bad memory is sometimes useful. I often forget where I’ve put things and while this is usually annoying (such as with the lost Waragi that I’ve been meaning to taste and write about for the last year) it can also lead to happy finds at the back of the booze cupboard. The other day, while searching for the Waragi, I noticed a sharpie labelled bottle that had slipped my mind shortly after putting the cap on, back on 28th October 2012 – a bottle aged Negroni.

END_OF_DOCUMENT_TOKEN_TO_BE_REPLACED 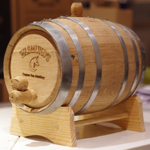 I’m rather interested in the effects of age on things. Not only my beautiful but increasingly creaky body (baldness is a sign of distinguishedness) but also drinks. As someone whose main gig involves whisky I spend a lot of time with aged spirits after they’ve come out of the cask but the actual process of ageing isn’t one that is open for most people to examine. I’ve grabbed a few bits and pieces of late and intend to do some experimenting with ageing drinks…

END_OF_DOCUMENT_TOKEN_TO_BE_REPLACED

While I have a fondness for doing random booze related experiments (some of which I should probably get round to writing up) I have generally avoided whisky.  Partly this is because using almost flavourless vodka to extract flavours from things is easier, but it’s also because I generally don’t have suitable whisky in the house – for suitable read ‘cheap’ and ‘unremarkable’. Cheap because I don’t want to waste good whisky on an unsuccessful experiment and unremarkable because whisky varies so much in flavour that finding a suitable one to mix up with things, whether it’s cocktails or infusions, is Hard. However, a while back Whisky Guy Darren told me of one that was pretty much certain to appeal to me and worth a punt as my first whisky experiment – Butter Washed Whisky. The recipe for this one is theoretically quite simple – melt some butter, pour it into some whisky, leave it for a bit and filter out the remaining solids. It’s not quite so simple in reality though. After adding the butter I shook up my jar to emulsify the mix and left it to settle. When it looked like it wasn’t going to settle any more I put it in the fridge to chill and the next morning scooped out the now solid layer of butter on top before pouring the remaining liquid through some coffee filters. This produced a gloriously golden liquid, much more yellow than the original whisky – Grants Ale Cask Reserve (the whisky that kicked off the creation of Innis & Gunn) – and completely clear.

I used about 50g of butter for 200ml of whisky and had a good amount of it settle out, so I suspect that I could use a bit less. However, I will probably still use the same amount next time as the butter was infused with the flavour of whisky and mixed with a bit of sugar made a rather tasty alternative to brandy butter to accompany my Christmas mince pies. On the nose it was really buttery, matching the spiciness of the whisky to make a rich spongecakey mix. It goes a similar way with the taste, with any sharp edges to the whisky rounded off by the buttery flavour, more sweetness coming though and woodiness on the finish softened. While quite nice on its own it’s not quite something that I’d drink neat – it still has a roughness to it that I’m not fond of. However, I’ve been playing around with apple juice as a mixer for whisky and found that it worked rather well here – 3 parts apple juice to 2 parts butter washed whisky combined the butter and spice of the whisky with the appliness of the juice to produce something rather like apple pie in a glass.