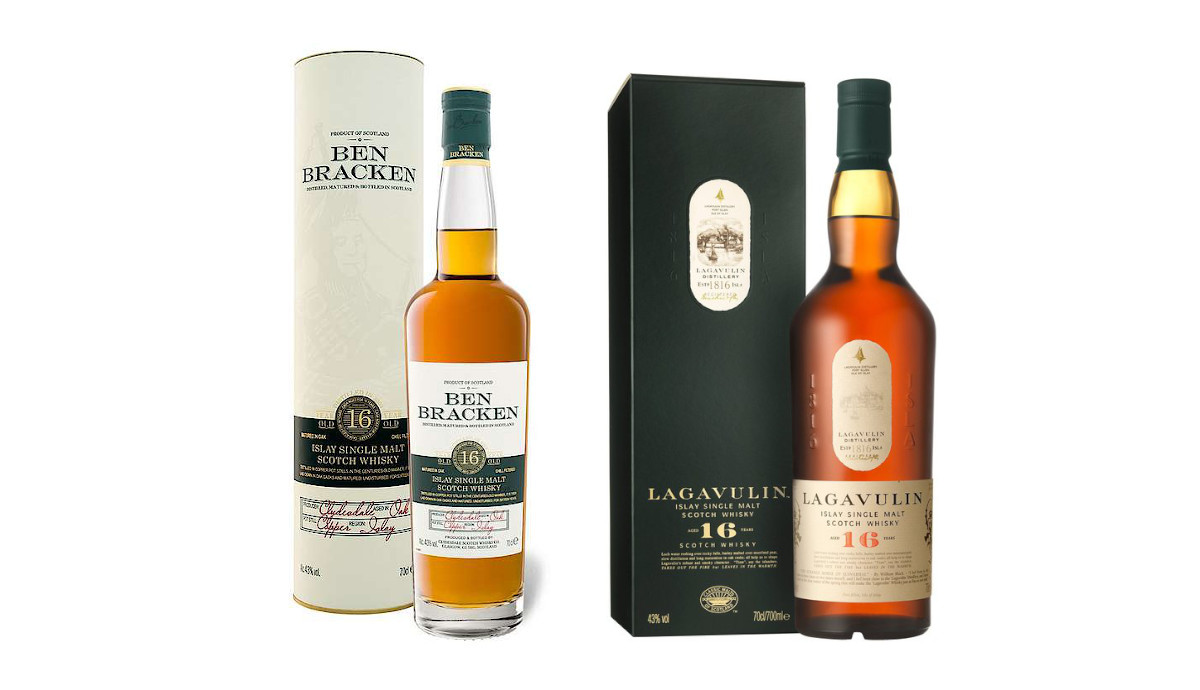 It’s almost Christmas and that means it’s time to be on the look out for booze bargains. On the whisky front, there is a lot of discussion about one particular deal – a good whisky, at a good price, with a hidden origin: Lidl Ben Bracken 16 Year Old. But could it secretly be Lagavulin 16 Year Old?

The big discounters – Aldi and Lidl, especially – are both well known for having decent drinks selections. Lidl’s whiskies are concentrated on the Ben Bracken range, which are put together behind the scenes by Whyte & Mackay.

The Whyte & Mackay connection often leads online commentators to suggest that the whisky is from the company’s distilleries – Dalmore, Tamnavulin, Fettercairn, Invergordon and Jura. This is isn’t necessarily the case, and probably isn’t in most cases. W&M are a long-established blending company, with stocks of whisky from distilleries across Scotland, obtained through swaps, filling contracts and purchases.

Basically, all we can say for sure origin-wise is that Ben Bracken is from Scotland.

As Whyte & Mackay own no Islay distilleries, we can’t turn to a simplistic guess of what it is, so need to do some minor sleuthing. First, what does it taste like?

Palate: Much softer on the palate, with a rich, thick and oily texture – almost syrupy. It’s darker and richer than the nose, with milk chocolate, long-stewed apple sauce, more creamily textured, buttery apple purée and a grind of black pepper.

It’s a good whisky, especially for the price. It is coloured to death and chill-filtered, but that’s not a particular issue unless you are a whisky purist. If you are buying £35 whisky from Lidl, then that’s probably not you.

It could be you?

Now we know what it tastes like, which distillery might it be? Fortunately, there are only nine distilleries on Islay, and only three that it really could be:

Ardnahoe don’t have whisky yet, Bruichladdich haven’t sold any whisky to other people since they reopened, Ardbeg haven’t for a while, Kilchoman also keep all their whisky for themselves, and it doesn’t taste like Laphroaig or Bowmore.

Most anonymous Islay whisky comes from Bunnahabhain and Caol Ila, and my immediate assumption on hearing that Ben Bracken 16 Year Old existed was that it was from one of the two. However, Lagavulin seems to be one of the favourite suggestions in online whisky geek circles. Its 16-year-old a perennial favourite – it was even the final entry in my whisky advent calendar a few years back – and finding it for cheap is an appealing idea.

Is it a Lagavulin 16 Year Old?

Releasing an anonymous Islay using Lagavulin stock – one of the most sought after Islay makes – doesn’t seem to make sense. However, if Whyte & Mackay has a load of it and didn’t need it for other projects, this would be a perfect place to ‘get rid of it’:

I got involved in the ‘What is Ben Bracken 16 Year Old?’ debate thanks to whisky blogger and vlogger – and colossal Star Wars geek – Jon Webb of Scotch and Sci-Fi. Here’s what he thought:

He was rather taken with the potential for it to be Lagavulin 16 Year Old. So much so that he not only invoked me in the video, but also sent me a pair of blind samples to try. While I guessed which one was which, they were much closer than I expected.

Here’s what I got from his Lagavulin:

Nose: Baked apples and smouldering oak chips. The smoke is soft and well integrated. Toffee and caramel notes come in behind along with developing green grass and eucalyptus. Tarry rope and bung cloth appears with some time in the glass.

Palate: Soft and sweet, with polished oak, smoky apples and tarry notes. Some char notes build along with peat smoke and spicy oak. Dried fruit – sultanas and apricots – sit at the back.

Ben Bracken 16 is definitely not just a straight rebottling of Lagavulin 16 – it’s fresher and zestier, without as much of the trademark Laga 16 weight. However, there are enough commonalities that I can see why people think it could be from the same distillery.

To break Betteridge’s Law of Headlines, I’m not going to say that it’s not Lagavulin. I’m not convinced that it is Lagavulin, but I am more open to the suggestion now I’ve tried them head to head.

In the end, Ben Bracken 16 is a decent dram, and I now have bottle of my own. I’d recommend not worrying about what it is and just get stuck in – it’s nice.