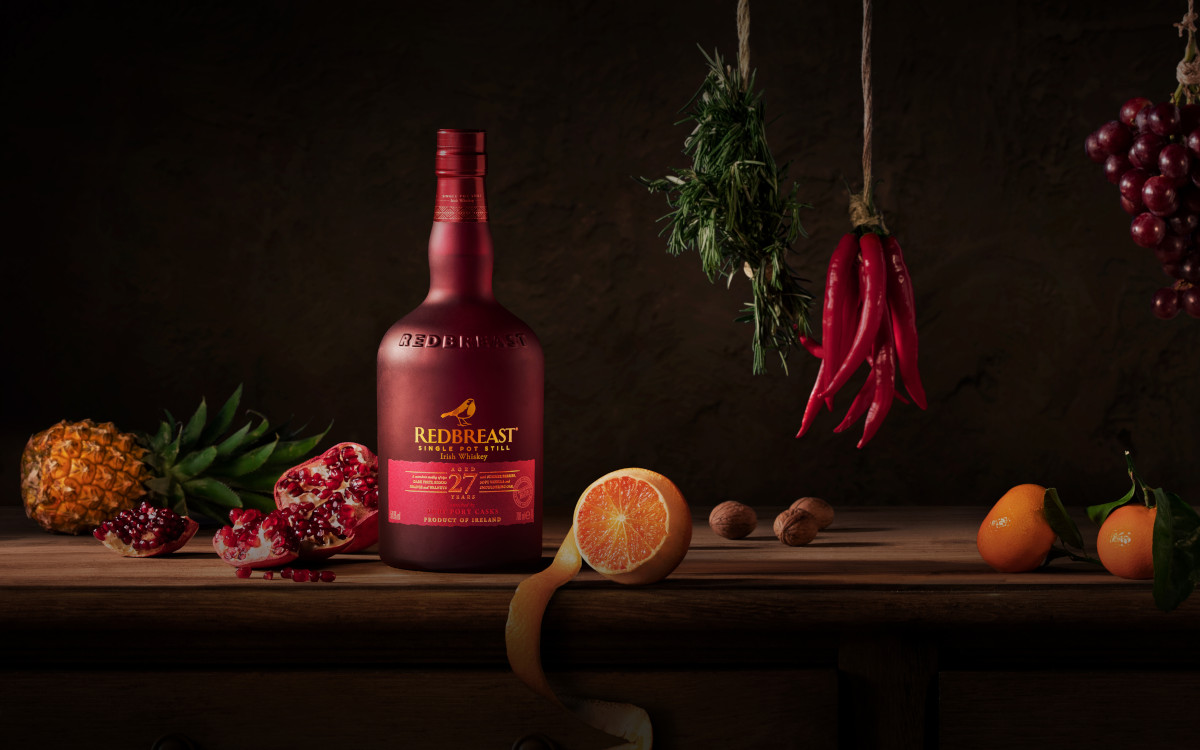 Redbreast is the biggest name in a small niche – pure pot still Irish whiskey. It led the charge as the category was rebuilt into the flagship of Irish whiskey for the booze connoisseur, and it has had more attention lavished on it than Irish Distillers’ other brands. So if you’re looking to break the final taboo of Irish whiskey – price – what better range of whiskeys to choose to do it with? Introducing Redbreast 27 Year Old, the oldest and most expensive ongoing whiskey in the Irish Distillers stable.

Jameson was the first Irish whiskey I tried, and I continued to drink it throughout my university days. Redbreast was, however, the second, poured for me by my otherwise non-whisky-drinking flatmate Neil. He told me it was peaty. I agreed. Neither of us knew what that word meant. We were very wrong. We’ve both learned now.

Pot Still is a style of whiskey very much from Ireland. Created when the English started taxing malt, it’s traditionally a mix of malted barley, and tax-beating unmalted barley and other grains.

However, it began to disappear when the Irish whiskey industry collapsed in the middle of the 20th century. In 1961 three of the remaining distillers – Jameson, Powers and Cork distillers merged to form Irish Distillers, and closed all but one of their distilleries – Midleton. They soldiered on as the industry further contracted, one of the last whiskey makers still distilling.

Jameson had been making Redbreast for brand-owner Gilbey’s since the beginning, and Irish Distillers continued to do so, despite having stopped selling whiskey to other companies in 1970.

In 1985, Irish Distillers finally cut off the supply, and Redbreast disappeared, leaving just Green Spot as the single remaining pot still whiskey available, and then only to folks in the know.

It wasn’t gone for long. In 1986, Irish Distillers bought the brand from Gilbey’s and relaunched Redbreast in 1991 as one of its own whiskeys.

Over the next few years, Irish whiskey’s popularity began to soar, and in 2011 Irish Distillers launched Redbreast 12 Year Old Cask Strength. They followed it with Redbreast 21 Year Old in 2013, and the limited-edition Redbreast Mano a Lamh – ‘hand in hand’ in a combination of Spanish and Irish – in 2015. The popularity of this even more sherried Redbreast inspired Redbreast Lustau, which dropped in 2016, matured in bourbon and sherry casks and finished for a year in Lustau sherry casks.

Limited-edition 32-year-old and 20-year-old whiskeys – the Dream Casks – followed in 2018 and 2019 respectively, leading us to the present day, and the latest release.

The line running through all of the Redbreast releases from the late 1800s onwards is sherry maturation. However, Irish Distillers and its predecessors have been looking beyond bourbon and sherry for more than a century, and the company has stocks of wine casks filled with pot-still spirit hiding in its warehouses.

To make Redbreast 27 Year Old, blenders Billy Leighton and Dave McCabe combined first-fill and refill bourbon casks, first-fill Oloroso and ruby-port-seasoned casks. The port casks come from Tanoaria Palaçoulo – aka Tacopal – the family-owned cooperage that Irish Distillers have been sourcing their port casks from for the past 30 years.

Nose: Red, purple and orange jelly babies, sweet and fruity with a touch of the tropical. The fruit sharpens slightly as underripe mango and papaya develop, joined by a spoon of scooped out passion fruit innard. A hint of spicy grain rolls through the middle followed by rich, dark fruit cake.

Palate: Thich, rich, oily and intense. A compressed ball of tropical-fruit jelly surrounded by flashed apple, pear, gummi bear and jelly baby. Gentle spice builds, followed by a hint of mint and menthol. Vanilla toffees hide out at the back with a handful of tarragon.

Finish: Tropical fruit and toffee fade to leave a tingle of menthol.

I’ll happily admit that I didn’t have high hopes for this whiskey. In the main, I find wine casks to be a blunt instrument when used to mature whisky, and while port is one of the lesser evils, it’s still rare that I find a port-matured dram that I like.

The port hasn’t been laid on thick, and the bourbon casks in the mix give the whiskey the fruity, old-Irish-whiskey character that I’m looking for in something that’s been aged this long. The port and sherry casks add another dimension without swamping the spirit. For me, this is what blending is all about – layering and combining flavours to give a balanced whiskey that isn’t dominated by one component.

Price-wise, €495 might at first seem quite steep. However, it’s not far off the going rate for the rare but still relatively common single-cask Irish single malts of a similar age, and this is positively wizened when it comes to regularly available pot-still whiskey. While it’s definitely expensive, it looks to be priced appropriately and, from what I’ve heard from Irish whiskey fans online, is selling well.

Unfortunately, I think this is a sign that the age of comparative innocence is now over for Irish whiskey. With JJ Corry’s The Chosen clocking in at £6,000 at retail, the Redbreast Dream Casks pulling in thousands at auction, and indie-bottled 1990s’ Irish single malt starting at around the £500 mark, the days of Irish whiskey always being affordable are gone.

A €495 ongoing bottling in the Irish Distillers range is evidence that Irish whiskey’s challenge to the dominance of Scotch single malt at the pricier end of the whisky spectrum continues, and it looks like Redbreast is leading the way.