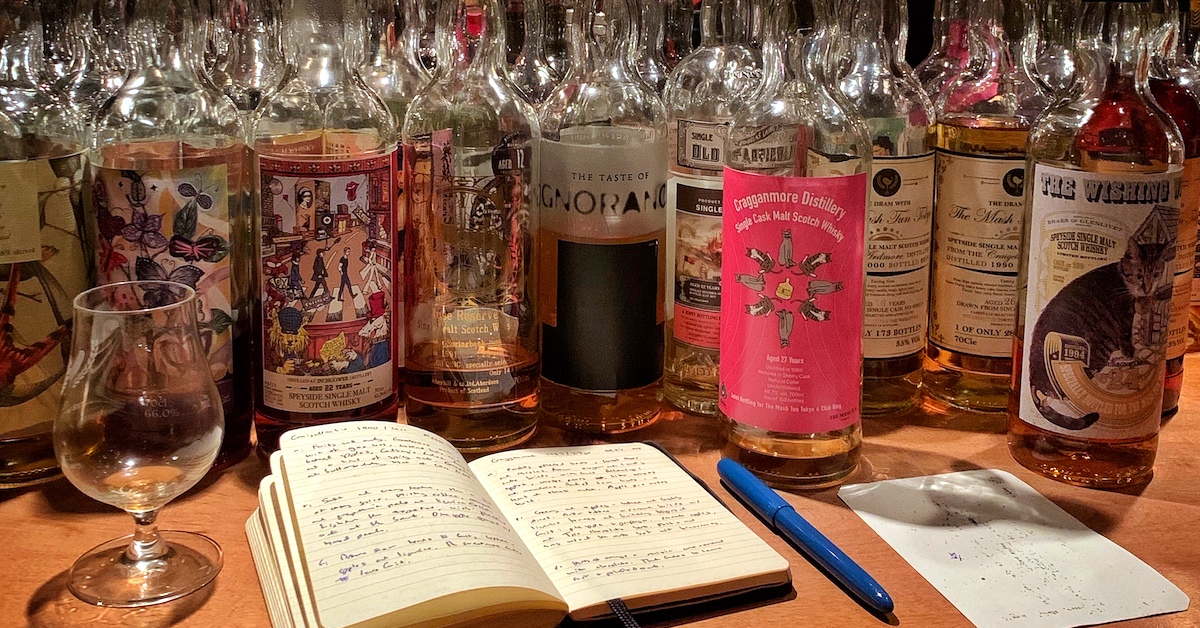 Tokyo is full of great bars and their reputation for whisky is second to none – if you want to drink interesting, then its the city for you. I only had time to visit one whisky bar during my trip to Tokyo, but, fortunately, the choice wasn’t difficult. Among the city’s bars, there’s one that has stood the test of time and is a must-visit for any whisky fan – The Mash Tun.

Hidden down a side street near Meguro station, The Mash Tun is on the first floor of a block that you might walk past if you’re not used to Tokyo’s bars. I wasn’t, and walked straight past when I visited. An easy way to know that you’re in the right place is the saltire hung in the window – this is a bar which doesn’t hide what it’s about: Scotch whisky.

The Mash Tun isn’t a very big place. There’s a table, some boxes of bottles, the bar itself, and very little else. But that’s all it needs, apart from whisky.

Owner Toru Suzuki has a lot of whisky. Enough that he’s run out of space on the shelves, and it the collection has escaped to cover the bar as well. With a focus of independent bottlings, it’s almost impossible not to find something new that you want to try.

Overwhelmed by choice, I asked Suzuki-san to recommend me some bottlings that had been done specially for the bar – he picked me three.

Craigellachie 1990 26 Year Old from The Whiskyfind

Bottled for The Mash Tun by The Whiskyfind, a Taiwanese bottler whose whisky doesn’t get much further than Hong Kong.

Nose: Fruity and meaty. Gooseberries with a hint of gas hob, custard tarts and baked apples, Cadbury’s fingers of fudge, and a hint of spicy oak. Grapefruit and butterscotch follow with a hint of sour CO2 fizziness.

Palate: Soft and creamy in texture. Cake spice leads, with milky coffee, orange and grapefruit peels, and liquorice following. It’s lighter than expected from the nose, with polished at the back, and pineapple sponge draped with tinned peach in the middle.

Palate: Creamy and apple-y – baked and freshly sliced. Butter toffee and caramel build, with liquorice touches and increasing tropical fruit: pineapple and papaya. Caramel covered apples (on a stick) are joined by Trio bars (from the 1980s), and Cadbury’s Fruit & Nut without the nuts but with blackcurrants.

Finish: Hints of orange and raisin are covered with chocolate. That all fades away to leave fruit and polished oak.

Williamson is the name given to a teaspooned whisky from Laphroaig – this is strictly speaking a blended malt, but it’s almost certainly almost entirely Laphroaig. It has an excellent label, combining Hong Kong trams with the obligatory cats.

Nose: Meaty, medicinal and minerally. The meatiness slowly rolls back to reveal fruit – generically tropical – with a touch of freshly painted creosote. Gravelly notes build, raked on a driveway leading to the ocean. Nose clearing menthol pushes through the middle, along with a scoop of black tar. As the nose acclimatises to the smoke, sweet apple and pineapple cubes grow, although hidden under a coat of tar and bobbly liquorice allsorts.

Palate: Soft and surprisingly easy-drinking after the intensity of the nose, and unmistakeably ‘Williamson’ – thankyou Bessie. Strong ash and TCP notes are swamped by orchard fruit and a touch of the tropical. Menthol notes waft about – a tub of Vicks Vaporub sits open in the wings. Pine and pineapple push in, but the tar creeps in around the back along with a stack of sticks of liquorice.

Finish: Sweet and leafy, with apples and menthol slowly dying away to reveal damp and earthy peat smoke.

Should I visit The Mash Tun, Tokyo?

Yes. Simple as that.

Other bars may have rarer or more expensive whiskies, but The Mash Tun combines a great selection, great atmosphere, great customers – you’ll always find someone interesting talk to at the bar – and an excellent host. If you’re in Tokyo, go – Suzuki-san will find you something interesting to drink.

One Reply to “The Mash Tun, Tokyo”