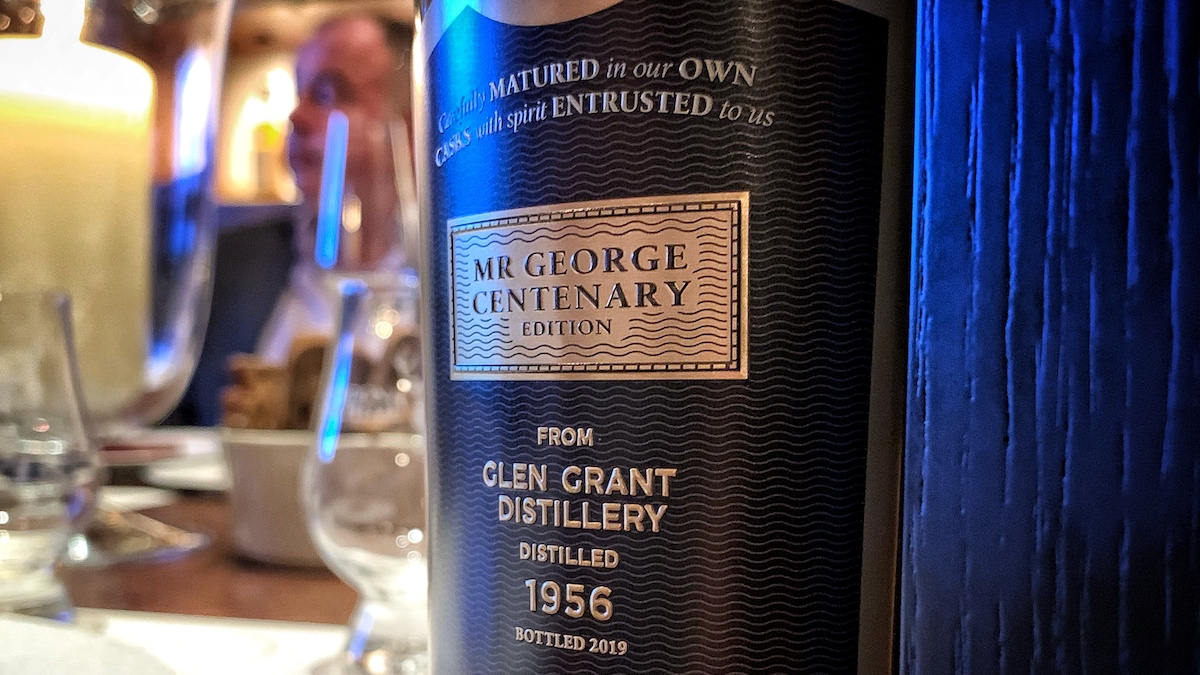 Gordon & MacPhail is well known for having some of the best stocks in the whisky industry. The company’s Elgin warehouses are filled with ridiculous whiskies from over the past at least 75 years, with rumours abound of more ancient things hiding in the darkness. This is all thanks to the Urquhart family’s long-standing approach of laying things down for the future, which really came into its own under the stewardship of George Urquhart, son of John, the first member of the family to run G&M.

This year, 2019, is the centenary of his birth, and to celebrate Gordon & MacPhail have released a new whisky, from George Urquhart’s favourite distillery and with enough tie-in numbers to make the most jaded marketing twitch with joy – Mr George Centenary Glen Grant 1956 62 Years Old.

A brief history of Gordon & MacPhail

Founded as a grocer in Elgin in 1895 by James Gordon and John Alexander MacPhail, one of the earliest employees was a shop boy by the name of John Urquhart. He rose in the company to become a spirits and wine buyer, and when MacPhail retired in 1915 he became senior partner, taking over the whole business when Gordon died a couple of weeks later.

Since then, the company has been run by the Urquhart family, who have lead it through the past century to become one of the most respected independent whisky merchants in the world.

Who was Mr George?

John’s son George – known as Mr George to stop the management of the company over the years from all being known as Mr Urquhart – joined the business in 1933 at 14 years old, the same age that his father had started in 1895. He took over running the business in 1956, and oversaw Gordon & MacPhail’s biggest period of growth as well as establishing the company’s ‘don’t be afraid to age it for a long time’ stock policy.

He grew the company’s bottling business, making them the go-to people to bottle whisky for distilleries without the facilities to do it themselves, grew exports around the world, including helping to make Glen Grant Italy’s biggest single malt, and introduced the Connoisseurs Choice range in 1968, creating maybe the most enduring name in independent bottling.

George was born on 16 October 1919, so to celebrate what would have been his 100th birthday, Gordon & MacPhail have chosen a single cask whisky to bottle and release on the day of the anniversary. It was selected by great-grandson Stewart, and carefully so – there are enough ‘coincidental’ numbers involved, that it can’t have been a complete fluke.

It’s a 1956-vintage Glenlivet – a whisky from Mr George’s allegedly favourite distillery distilled in the year he took over the business – aged for 62 years – the number of years he worked for G&M.

It was matured in a single first-fill sherry butt, yielding 235 bottles. They went on sale for £5000 each, a surprisingly reasonable price compared to other similar releases.

It is, as you’d expect, a very good whisky. Someone’s obviously been keeping an eye on the cask, as despite the potential for it to become a woody mess – 60+ years in a first-fill sherry cask can do that – it has stayed just on the right side of things, balancing savoury oak and dried fruit character with sweeter fruitiness and controlled spice.

Gordon & MacPhail are a go-to bottler for this kind of thing, and unsurprisingly it’s already hard to get hold of. I suspect we’ll see bottles pop up down the line in auctions, but at this price point, we should also see some bottles opened and enjoyed – a suitable tribute to the man without who we wouldn’t be able to try whiskies like this.

Many thanks to Gordon & MacPhail for inviting me to the launch.