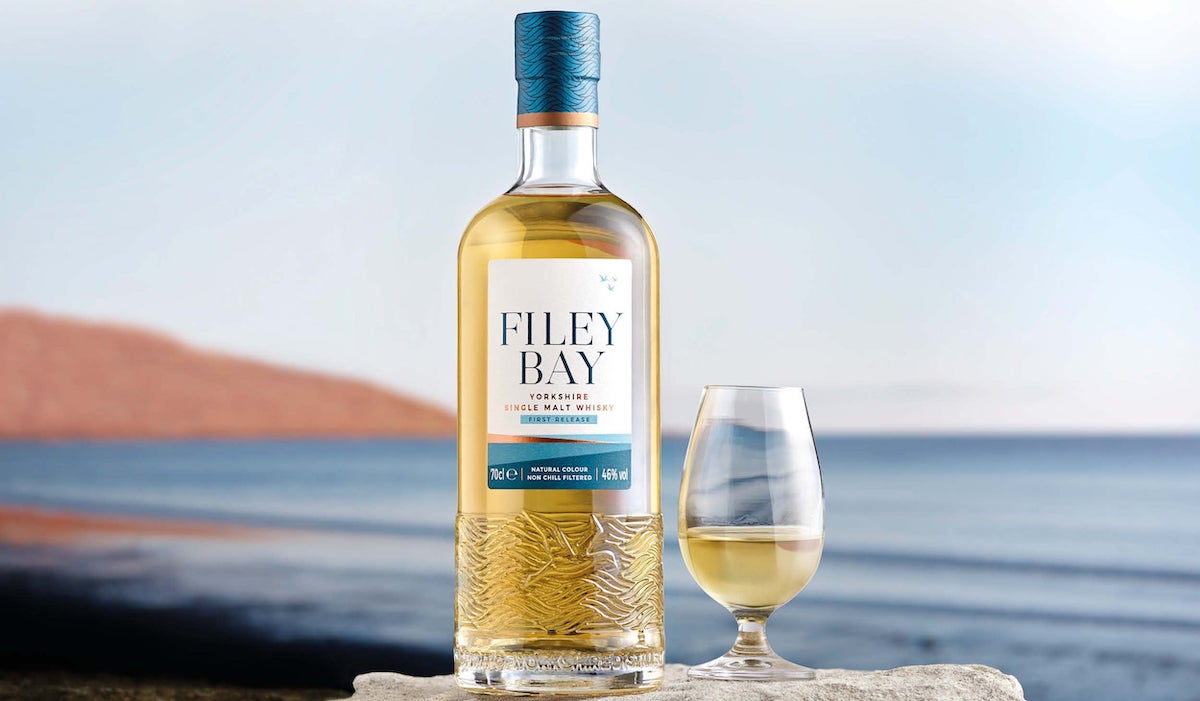 The Spirit of Yorkshire is a distillery I’ve been keeping an eye on. Not only is a friend of mine its whisky director, but the maturing malt spirit has been some of the best that I’ve tried from an English distillery. That spirit has now hit the magical three-year-old mark and the first release has landed – Filey Bay.

Spirit of Yorkshire has a number of things that set them apart from other distillers. The biggest is that they control the whisky-making process right from the field.

Tom Mellor has been growing barley since he took over the family farm in the 1980s. In 2003 he and wife Gill founded the Wold Top brewery to turn some of it into beer. In 2016, Tom and friend David Thompson bonded over a love of whisky and opened Spirit of Yorkshire – if you’ve got beer, why not turn it into whisky?

The whisky wash is not the same beer that the brewery sells, but it is brewed at Wold Top before distillation at Spirit of Yorkshire, a short drive away. That’s against the Scotch Whisky Regulations – mashing, fermentation and distillation all have to happen at the same place – but it is allowed in the rest of the UK. The team tanker the wash down the hill from the brewery ready for distillation.

The legacy of Dr Jim Swan

To build the distillery, the Spirit of Yorkshire team worked with the late, great Jim Swan, one of the architects of modern distillation. He’s not only behind the design of the latest crop of producers – including Clydeside, Annandale, Cotswolds and Lindores Abbey – but also the first wave of new distilleries – Penderyn, St George and Kilchoman – and even those making waves further away – Kavalan in Taiwan, Milk & Honey in Israel and Victoria Caledonian in Canada.

At Spirit of Yorkshire, they have an interesting still set up, put together with Jim Swan’s help. Not only are the wash and spirit still ‘the wrong way around’ – the wash still has a boil ball (usually used to help with reflux in the spirit still) and the spirit still has a straight head – but the spirit still also has a four-plate column attached. The column can be switched in on selected runs giving the distiller more options when creating spirit.

The distillery fills quite a large selection of casks, but almost entirely sticks to 200-litre American Standard Barrels and above – no small-cask, over-cooked maturation here, unless it’s one of whisky director Joe Clark’s experiments.

On top of the standard ex-bourbon ASBs (~200-litre American Standard Barrels), SoY also fills STRs – shaved, toasted and recharred casks, a favourite of Jim Swan – a range of sherry casks – oloroso, fino and PX – and also some orange wine casks, formerly filled with sherry infused with orange peel – a similar type of cask to the ones that Amrut used to mature Naarangi. I tried one of the latter casks when I visited the distillery back in 2017, and am looking forward to them seeing the light of day. It was rather good, even at just six months old.

Palate: Soft and creamy at first, with the peel and orchard fruit from the nose quickly appearing. The fruit veers towards sharp and sweet and sweet apples, with a bit of gummi bear fruitiness. At the centre are crunchy barley sugar and a pinch of sherbet sourness, with developing lemon zest zinginess.

Finish: Sherbet lemons fade to leave butterscotch, barley sugar, and a touch of milky coffee with a dusting of cocoa.

It’s young whisky and while not my favourite spirit from Spirit of Yorkshire, it shows off how good the distillery is. It has the slightly underdeveloped edge that you might expect from a three-year-old whisky, but it’s already got lots of fruit, and that’s only going to grow in the cask. For now, it’s ‘just’ a very good young spirit. The single sherry cask feels a bit lost in here, though.

We’re at an exciting time in the development of modern English whisky. Cotswolds, Bimber, Lakes and Spirit of Yorkshire are making their claims on the whisky landscape, each with a different take on production, maturation and the style of their final whiskies. SoY have jumped on the crispy fruity side, shying away from the heavy cask influence of the other three, and hopefully, they’ll continue focusing on that side of things – it’s very much my style.

Filey Bay costs £54.95 a bottle and is available directly from the distillery, from online retailers, and in Booth’s supermarkets in the cold, dark lands of the north…

In the interest of full disclosure, Spirit of Yorkshire whisky director Joe Clark is a friend of mine and I owe him a lot of beer. I’m not even sure why any more, but I know I do. This article does not count as payment against the debt, annoyingly.