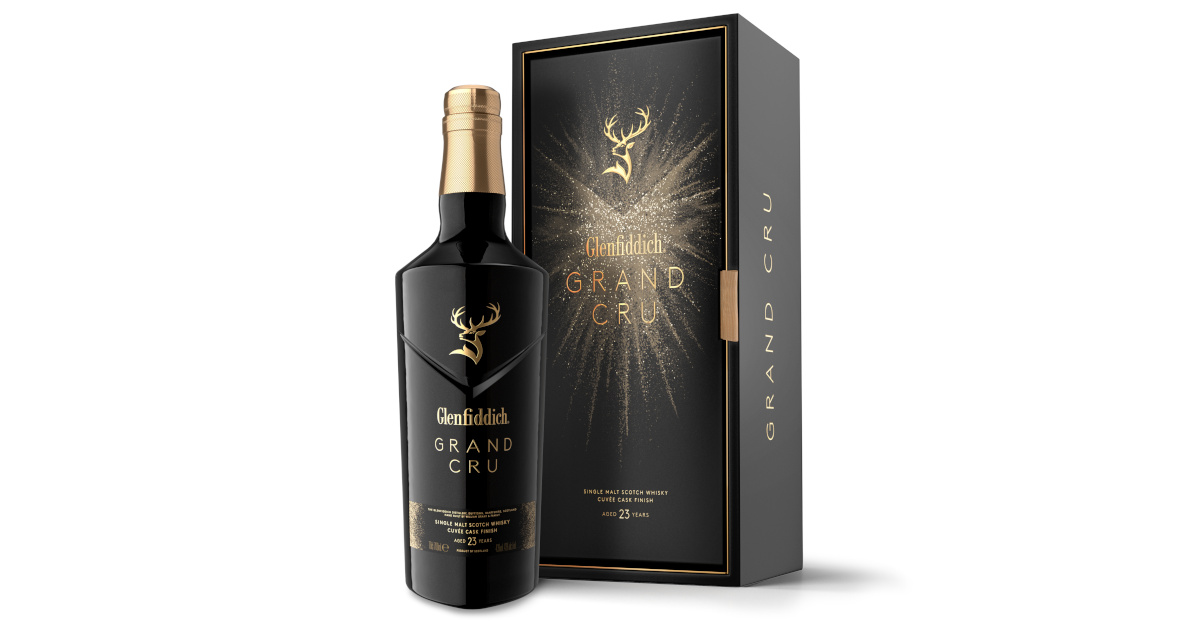 It’s the time of year when Glenfiddich introduce something new. After a few years of Experimental Series releases, it’s time for something different. A new ongoing release and the beginning of a new series – Glenfiddich Grand Cru.

For me, the most interesting question asked during the London launch of Glenfiddich Grand Cru was one that shows the way Glenfiddich is perceived in the at least the UK: ‘Do you think your customers will pay for a bottle that’s this expensive?’.

The answer is, of course, ‘yes’ – Glenfiddich has the strange accolade of being ever-present in pretty much every supermarket where booze is sold, as well as fetching thousands of pounds for its specialist, limited-edition releases. But while the brand straddles the whole gamut of price and exclusivity, most people only know ‘the green one’: Glenfiddich 12 Year Old, the biggest selling single malt in the world.

Glenfiddich Grand Cru sits between those two worlds, at around the £200 mark. A place for those who haven’t jumped into the world of high-end Glenfiddich drams to start the exploration of a very different – and expensive – side of the distillery’s output.

Glenfiddich Grand Cru started its life as regular Glenfiddich, albeit a relatively old vatting. It’s a mixture of 23-year-old whiskies from ex-bourbon and -sherry casks, with a 90/10 split in favour of the former, that were first married for six months. It was then finished for four months in a ‘cuvée cask’.

Champagne is a wine of several steps and it’s not Champagne until it’s reached the end of the process. Stage one is making a still wine, a process during which some houses use oak casks as fermentation vessels. It’s these that Glenfiddich call cuvée casks – casks used to hold the grape juice as it vinifies and becomes the base wine that will go on to become Champagne after a second fermentation in bottle.

The cuvée casks are sourced through a broker, so Glenfiddich don’t know which house they have come from, but we still know a bit about them.

The final assemblage of the Grand Cru is a mixture of the first fill of the cuvée casks and a refill of the same casks. The first fill was said to be too intense, picking up an almost cloying creaminess, so it was cut with refill spirit in about a 50/50 ratio to mellow the mix.

The resulting whisky is bottled at 40% ABV in a very pretty box and is launching with an RRP of £200. It’s exclusive to Harrods and the Glenfiddich website at first, but will be hitting specialist retailers from 18 September 2019.

Nose: Gentle and light, but classic Glenfiddich – butter and honey with sweet pear and a touch of sharp apple. There are stronger floral top notes – honeysuckle and spring meadows – with beeswax touches and candy bracelet sweetness. It sits on the edge of soapiness but falls on the right side. Sweet cream develops, with a touch of freshly-sliced brioche. It’s got a very delicate aroma, but it becomes bigger with time in a glass.

Palate: Creamy texture with an up-front floral-syrup sweetness. There’s more weight on the palate than the nose suggests, with toffee apples and salted caramel sauce joined by apple skin, soft spice, leafy tarragon and a healthy scrape of lemon zest. Right at the back there’s a layer of bittersweet and creamy cappuccino.

Finish: Quite soft, with the spice lingering. The creamy coffee from the palate hangs around, fading to reveal apple and pear skin, and sweet and sour apple purée.

The first thing to note is that it’s not an assertive dram. Glenfiddich can be quite delicate, and this is very much of that style, with the low bottling strength helping to keep things on the lighter side. That said, there’s enough of a hit of spice and intensity of flavour on the palate that I’m not sure how much a punchier strength would make it better – 43% ABV maybe, but any more could be too much.

While it might be expected that the previous occupant of the casks would have the most affect on the spirit, it’s very much the French oak that does the business here. Whether it’s just that the months of fermenting white wine didn’t have much influence on the cask – low strength booze without much colour, so it wouldn’t surprise me – or that the wood itself is much more dominant, for me it’s French-oak toffee and spice that the finishing cask has added.

It’s very much what you’d expect when you imagine a high-end Glenfiddich: soft and understated. The cask has helped it take on a different aspect to the others, but don’t expect a big hit of finishing-cask flavour: this is an entry point to the upper reaches of the Glenfiddich range, where subtlety is very much the name of the game. That said, this might be a bit too subtle.

While ambassadors Alex Walker and Mark Thomson were impressively tight lipped, they did drop a few tidbits about what’s coming next.

Firstly, this is not part of the Experimental Series, and is instead launching a whole new line: the ‘Grand’ range. The Experimental Series isn’t going away – they’re still focusing on Fire and Cane, which took an alarmingly long time to finish being released around the world – and the Grand range is a new line that will sit alongside it.

The focus of the Grand range is marrying Glenfiddich with drinks that are traditionally  drunks at celebrations. They’ve started with Champagne, but the series will potentially continue with more finishes in casks previously filled with drinks used to celebrate around the world. A few ideas were thrown to the crowd: high-end wine, Cognac, rum? My bet’s on the first two.

While we don’t know what the next release in the Grand range will be, it’s likely to be in the back half of 2020. Although there were hints that there might be something else appearing beforehand…

Most of all, the Glenfiddich team are wrapping Grand Cru in an atmosphere of luxury. They’re associating the Grand range with high-end celebratory drinks, and the spray of gold across the front of the packaging, the main launch in Singapore and the initial exclusivity in Harrods all feed into a generally luxurious air. However, this isn’t luxury in Glenfiddich’s normal way – it’s very much an entry-level price for the upper echelons of the distillery’s range.

This feels like a stepping stone, filling in a gap in the price points that the distillery’s range currently covers. Winter’s Storm – from the Experimental Series – flew off the shelves at a similar price, so it looks like Glenfiddich’s fans are ready to step up to a new level, and the Grand range is ready to fill that need.

Many thanks to Mark Thomson for finding me a copita glass so I could write my tasting notes, as the Champagne coupe the whisky was served in at the launch almost caused me to inhale and drown in expensive Glenfiddich.