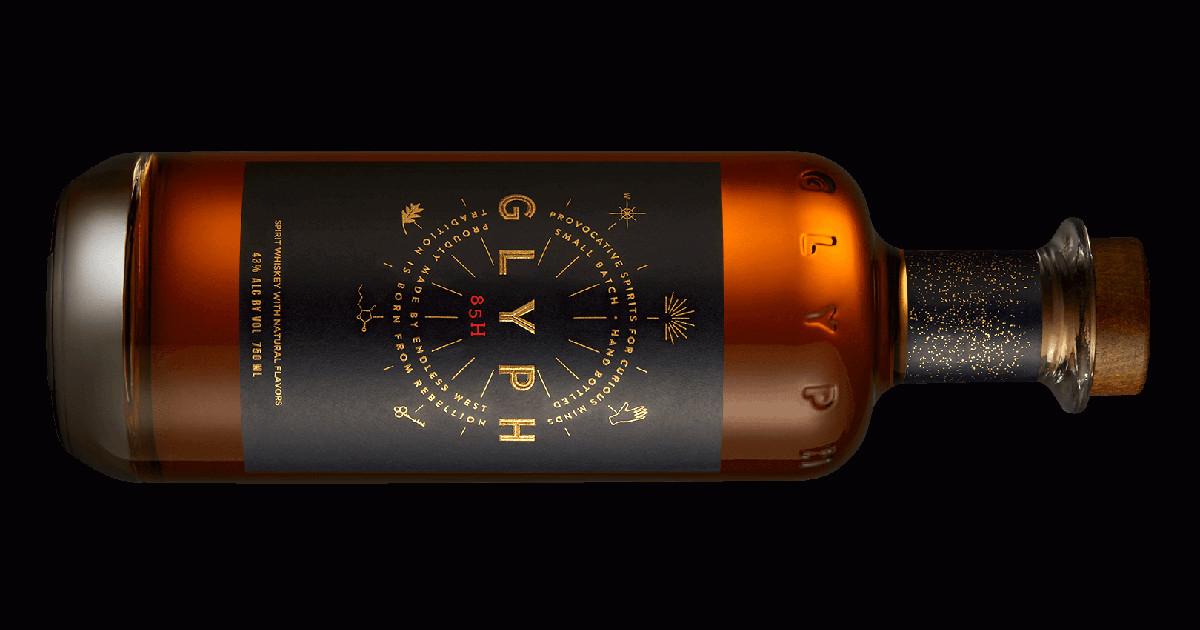 At the edge of the whiskey world, there are lots of interesting things happening. Whether it be strange ingredients, extreme production methods, or even over-the-top packaging, pushing beyond the norms is definitely on the rise. So when I heard that someone’s not only made a whiskey from scratch in a lab but also put it on sale, I needed to try it. Glyph – ‘the first molecular whiskey, made overnight in California‘.

Endless West, the Bay-Area company behind Glyph, started in the traditional tech-startup fashion: person sees a thing and wonders why it can’t be done differently, finds a friend who agrees, and then finds an expert to help them put together a company. In this case, it was a scientist trying to work out why you couldn’t recreate expensive wine vintages in a lab. He grabbed another scientist and a sommelier, and started to pull apart the chemical make-up of wine.

While the company website glosses over its pivot into spirits, the stories I’ve heard online and off have focused around the difficulty of making wine from scratch in the lab, and a string of failures to do so. However, with spirits being mostly water and alcohol, they seemed like a much more fruitful initial line of research, and thus the project that led to Glyph began.

Simply put, Glyph is a whiskey made (primarily) in a lab, using no actual traditional whiskey-making techniques.

Endless West has some detail of the production process on its website, and it’s how you might expect: map the flavours in your desired spirit in some way, find natural sources of those flavours, add them to alcohol, and bottle it.

In the case of Glyph, the team start with a neutral spirit as a base – corn-based grain neutral spirit – and add all the bits that make a whiskey taste like whiskey: the tasty congeners that make up a tiny percentage of the volume of a bottle but contain all the flavour.

The labelling of the bottle, and a final tweak to production, shows that they’ve definitely got some marketing nouse in the company. The process they outline for creating Glyph would lead, legally speaking, to a flavoured vodka. Despite making many questionable decisions over the years, I suspect the TTB – the Tax and Trade Bureau, arbiters of booze labelling in the USA – would baulk at allowing ‘whiskey-flavoured vodka’ on a label.

So, to make sure that they can still get ‘whiskey’ on the label, Glyph is instead a spirit whiskey.

According to the regulations:

The Standards of Identity for Distilled Spirits
Code of Federal Regulations Title 27 § 5.22

Basically, it’s a mixture of actual whiskey and neutral spirits, with at least 5% whiskey in the mix.

So, the folks at Endless West have added a tiny amount (I assume close to the minimum) of regular whiskey to Glyph to ensure that they can put whiskey on the label – it’s specifically not for flavour, just for regulation. Excellent work, marketing team.

Glyph seems to currently only be available on the west coast of the USA and New York City, so getting hold of it isn’t trivial. Fortunately, occasional drinking buddy Felipe Schrieberg found one and cracked it open to share.

Nose: Apricots and blanched almonds to start. Cherry Bakewell and pastry develop. Butter and creamy notes build, with candied lemon, meringue and a handful of jelly beans. The sweets continue into gummi fruit, with flashes of clean spirit popping up in the gaps. With a little bit of time sitting in the glass, there’s some cream cheese, hairspray and grapes, with darker notes of coffee hiding at the back.

Palate: Surprisingly thick mouthfeel, with vanilla cream and the apricots from the nose in plump but dried form. Spirit runs through the middle, clean and creamy with a hint of citrus: vodka rather than a whisky new make. Sultanas and spongecake are joined by apple skin and a touch of aniseed.

Felipe and I had the same reaction – it tastes a lot better than we thought it would.

Are lab conditions too clean?

In the end, it doesn’t taste like whiskey. The intention, according to articles like Felipe’s from last year when Glyph launched, was to create something that had a similar profile to a sherry-matured whiskey, and they’ve not come close to that.

In the end, for me, this tastes like what it is: a neutral spirit with some flavours. It alludes to the flavours in whiskey, but it misses one very key, core fact: the flavour of the base spirit is important. Glyph is made with neutral spirit and that doesn’t have the same character as the grain spirit that makes whiskey what it is.

We tried Glyph blind against a sherried Scotch whisky (which we later found out was Glenfarclas 10 Year Old) and it was immediately obvious which was which – the Glyph had a vodka cleanness at its heart, while the Glenfarclas was run through with grainy new make. Those grain characteristics never disappear from a whiskey, even after long maturation, and for me, Endless West has missed them when mapping the flavours.

This may well be intentional – from the reviews I’ve read online, Glyph’s target market like the crisp character that the NGS core gives. However, it makes Endless West’s claims about Glyph more unbelievable – it is far from being ‘biochemically equivalent to the finest aged whiskies‘.

It may not have made a whiskey, but Endless West has created something that fits firmly into the whiskey-flavoured vodka category in my head. A category that only has a single entry at the moment, but one that I see growing over the coming years.

This isn’t the first time I’ve written about such things. For more thoughts on the wonderful world of artificially created whiskey – More Whisky than Whisky.

Many thanks to Felipe for sharing his Glyph, and to Eddie and the Milroy’s gang for giving us some space to taste it – you can find bar-bossman Pat’s take on Glyph in the Economist’s 1843 magazine.

If anyone’s heading to California or New York soon and has space in their bag to bring back a bottle or two, please let me know…