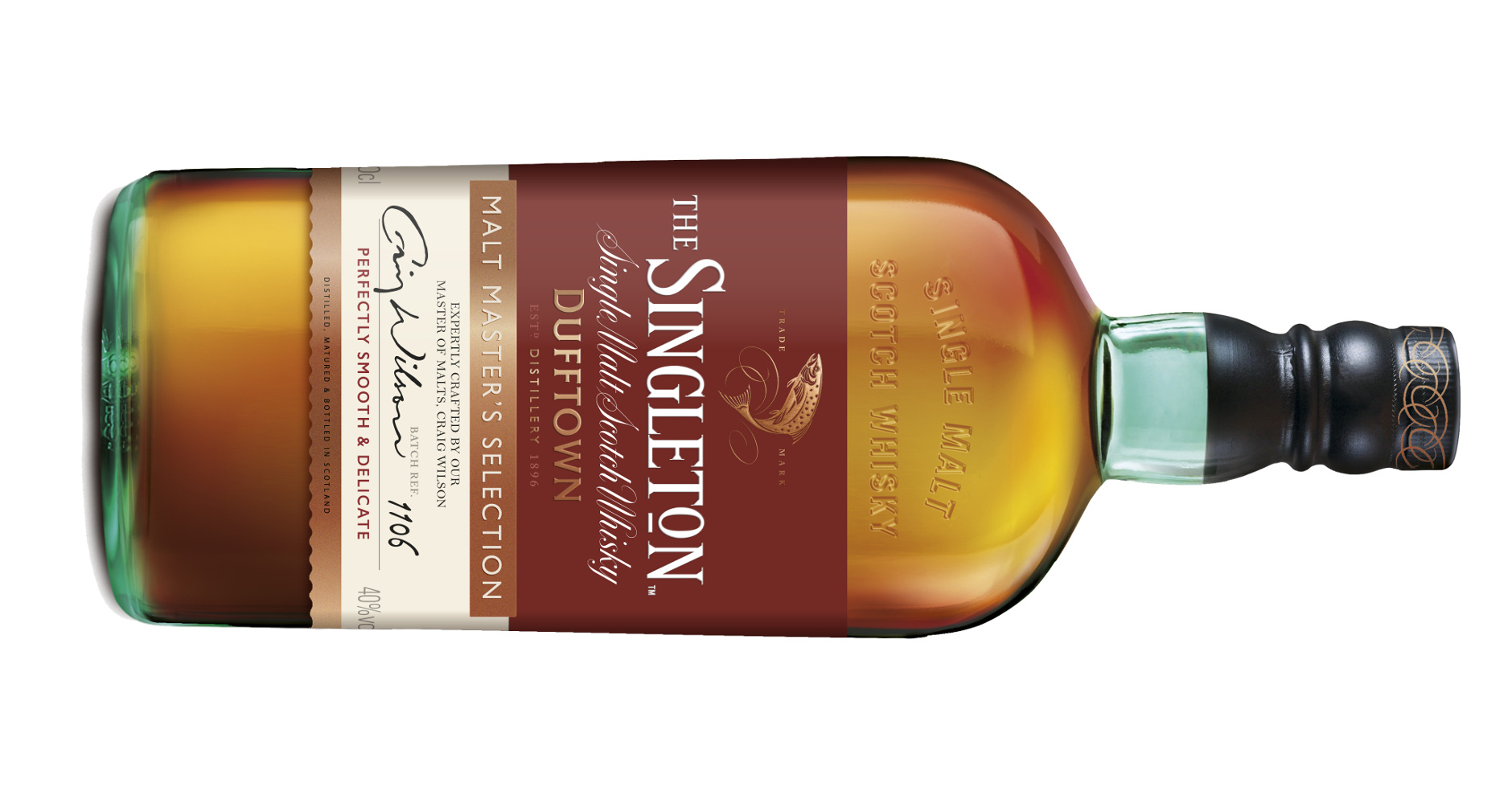 The Singleton range of whiskies is a monster. I don’t mean that in a necessarily bad way, but like many monsters it is misunderstood, not particularly appreciated and big. Probably too big. However, after a promise of demonsterification a few years ago, it looks like we might finally be making progress. Step one, simplify the range and launch a new entry level bottle – introducing The Singleton Malt Master’s Selection.

The name Singleton goes back a bit. In recent memory, it first popped up in the 1986 as a way of disarming the difficulty in pronouncing Auchroisk – Orthrusk, I’ve been reliably told and mostly believe. However, when The Singleton of Auchroisk went away in 2001 (replaced by the Flora and Fauna bottling from the distillery), the name sat unused, despite being rather good.

It didn’t stay dormant for long, and in 2006 Diageo launched The Singleton range of whiskies. There were three distilleries involved, one for each major sales region: Dufftown for Europe, Glendullan for the USA and Glen Ord for everywhere else. It started simply, with some bottles for travel retail. Then a generally available core range bulked that out to at least three bottles per market. Then there were new travel retail releases, and special editions, and Special Release entries, all region specific but leaky between markets. The font on the label was also nice and cursive, focusing the eye on The Singleton branding and obscuring the distillery name, making the bottles quite interchangeable.

It all got a bit confusing.

Then in 2015, Diageo announced plans to assault Glenlivet’s hold on the ‘biggest whisky brand in the world’ trophy – while Glenfiddich sell more bottles of 12 Year Old than any other individual whisky from another company’s portfolio, there is more Glenlivet shifted across the distillery’s range, making it the biggest seller in total. The Singleton range was the weapon of choice, and the plan was simplification: reduce the number of entries in the range and remove the regional restrictions.

However, there is now finally a light at the end of the tunnel: some expressions are going away and we have a new one appearing.

Back in 2014, two new expressions joined The Singleton of Dufftown range – Sunray and Tailfire. They didn’t seem to make much of an impression, despite some solid attempts at marketing (I once spent an afternoon on the South Bank in London manning a till for a Singleton pop-up shop – my cash box was mostly untampered with by the end of the day, other than some mild pillaging for change by a nearby hotdog vendor) and are now going away. Diageo are also discontinuing The Singleton of Dufftown Spey Cascade, a whisky that made so little impression on me that I had to look up its name in my notes.

The new release is The Singleton of Dufftown Malt Master’s Selection. The back of the box informs us that it is built around three types of cask: refill, ex-bourbon and sherry, but I’ve also heard that there might be some wine casks in the mix. But that’s not what this whisky is about – it’s a whisky to pull people into a revitalised Singleton range, designed to sell well from supermarket shelves.

While the flat bottle – the signature of the Singleton range – has remained, the label is simpler, and the Dufftown more obvious. The only other major addition is the signature of the Master of Malts, Craig Wilson. His name has popped up a few times over the past few years, and I first heard him mentioned in interviews about Talisker Port Ruighe. With whisky fans liking to know who put their dram together and the rest of the Diageo malts blending team being a bit shy, I suspect Craig might get wheeled out more often over the coming years. Pray for Craig. 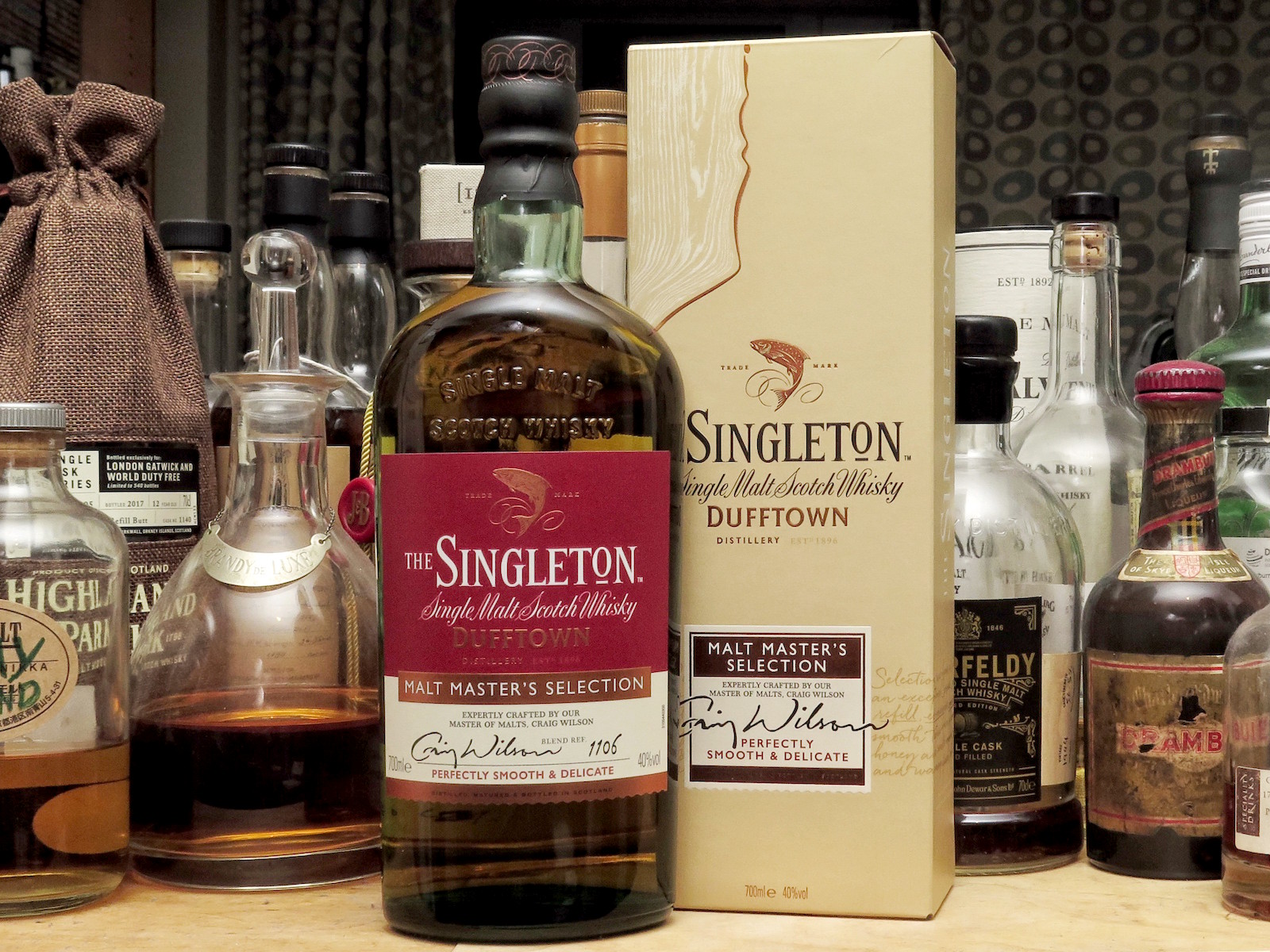 In short: it’s quite nice. Exactly as you’d hope it to be. It won’t change anyone’s life, but it’ll happily do as the beginning of a range of reasonably priced and sensibly organised whiskies in the Singleton range. I just hope that it is actually a proper push towards simplification, rather than another Spey Cascade.

Most of all, I’m hoping that it means we’ll see something interesting from Glen Ord. I love me some Ord.

The Singleton of Dufftown Malt Master’s Selection should be available Real Soon Now from whisky specialists and is already popping up in supermarkets – RRP looks to be £35, but there are already special offers knocking about £10 off that..

Posted as part of The Whisky Wire’s Singleton Flash Blog – keep an eye on Twitter for more posts: #Singleton and @SingletonWhisky.

One Reply to “Singleton of Dufftown Malt Master’s Selection”