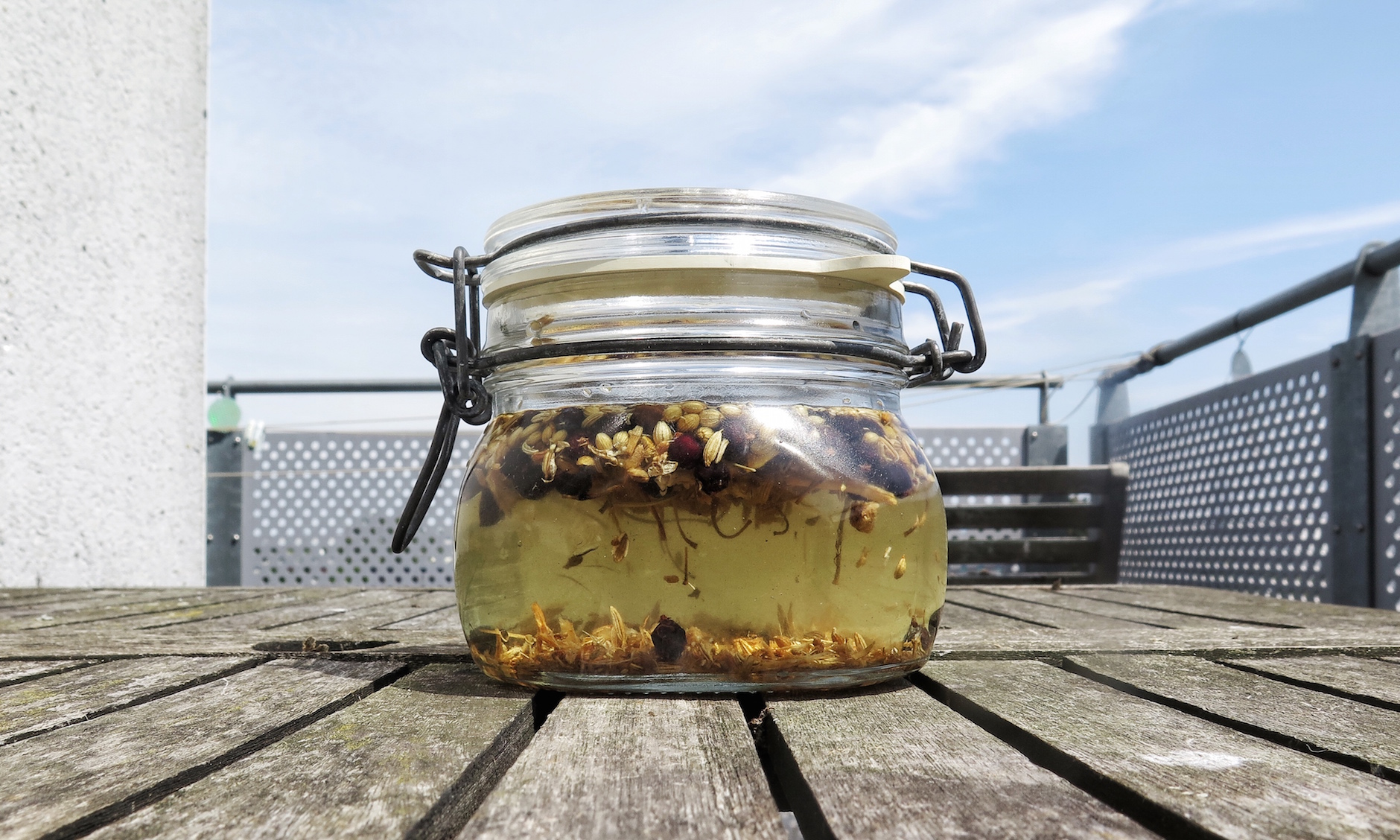 It is, yet again, World Gin Day. As is law, today I will drink gin – this year at Junipalooza. But, in a departure from usual, I’ve also made some. Well, started the process anyway – it takes a day or so to make bathtub gin.

For a long time I’ve been meaning to make my own gin. I’ve stood around while stills have run, but never come up with my own recipe and actually made some. To do so with a still would involve not only getting a still (my landlord has forbidden me from doing so, having realised the explosive hazard to his flat) but also a rectification license. While it’s not that hard a document to obtain, I suspect that my flat, a stove, a copper pot and my tap running cold water into a bucket would not satisfy HMRC’s requirements for premises, heat source, still and condenser.

Instead of a distilled gin, I am instead making a cold-compounded gin aka infused gin or bathtub gin. It is basically the first step of making any gin – stick some botanicals in neutral spirit and let them infuse. Distilled gins take this further, distilling the resulting stew of spirit and botanicals to create a clear and clean gin.

The problem I found when starting to this experiment was that I had no idea of the amounts of botanicals involved – having a baseline to work from is helpful. So, as is day appropriate, I grabbed the recipe from Gin Monkey’s website. Emma ‘Gin Monkey’ Stokes is not only generally the queen of gin, but is also the current organiser of World Gin Day, so as this is her fault, it only seems fair to put the blame for at least some of my recipe on her.

While distilled gins will start with 95%+ ABV neutral spirit, they will also water the spirit down before distilling, and in some cases while infusing the botanicals into the spirit. This is one of the many justifications I am using as to why I used 40% vodka as my base spirit. The main reason is that I had a 35cl bottle of vodka in the fridge, where it has sat untouched for the past year – I needed the space, so gin it will become.

As I’m only using 35cl of spirit, I halved the measurements for Emma’s basic recipe. Rather than a bathtub, I used a small jar. 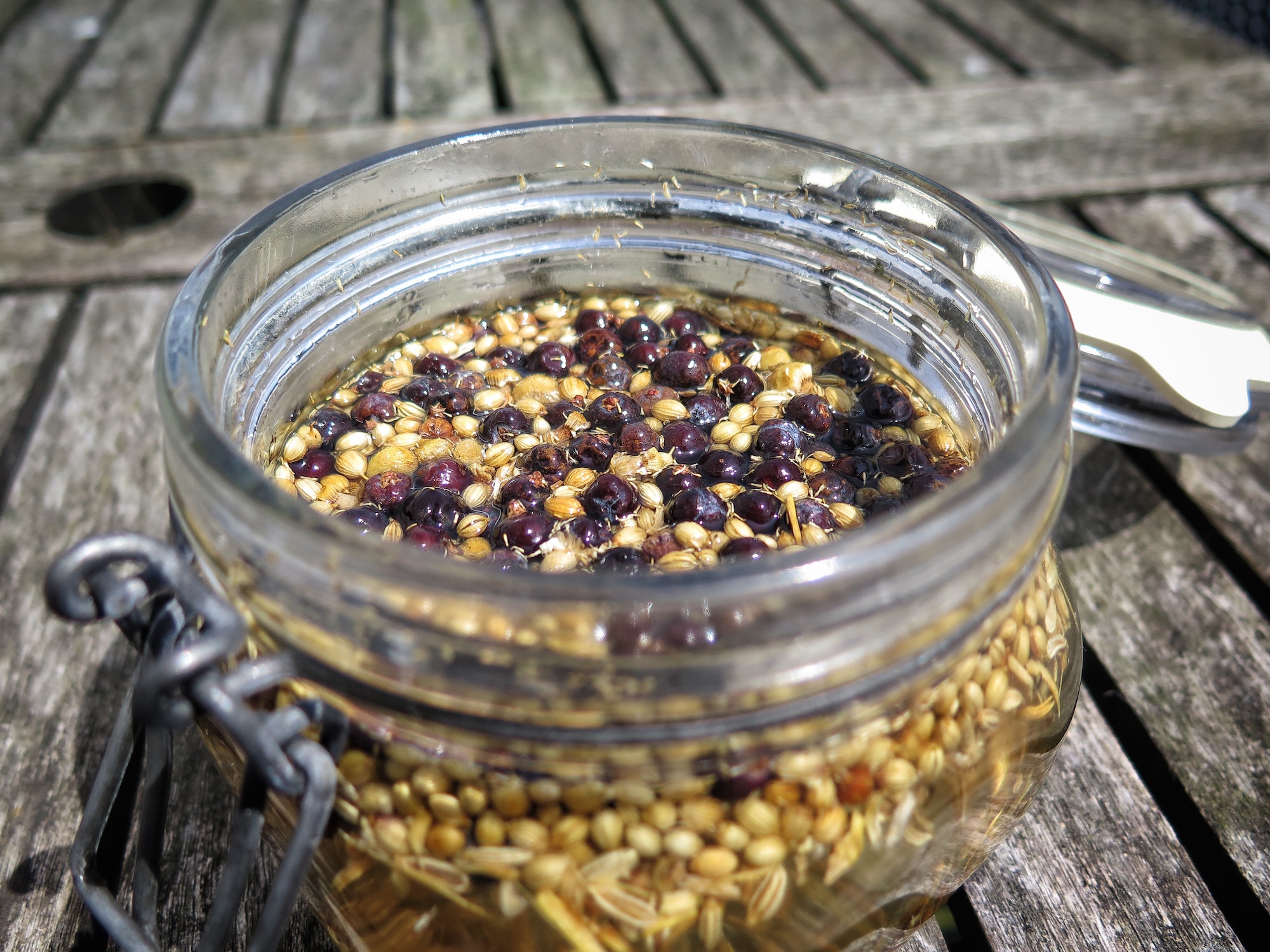 Add some citrus to that and you have a classic gin base: heavy on the juniper (without that, it’s not gin, just flavoured vodka), with coriander for a citrus-tingerd spiciness, citrus for actual citrusiness and anglelica for earthiness and as a fixer for the other flavours – it’s meant to help the other flavours shine and not become too muddied. However, fresh citrus peel is a powerful flavouring agent, so I’m going to add it after the gin is on its way.

Along with the core ingredients, I dug into my abinsthe botanicals stash (originally purchased for smelling rather than drinking) and pulled out three more flavours to add, each in a relatively small amount:

I’m a big fan of liquorice-forward gin, but I only had liquorice powder (which would make my gin murky) and it’s more the anise flavour that I like – hence aniseed and fennel. I also like floral notes and the camomile has sweetness and floweriness in spades, even after a couple of years in a jar.

So, the ingredients are in a jar, they are being regularly shaken and Sunday will see citrus and maybe further flavourings added. Watch this space…