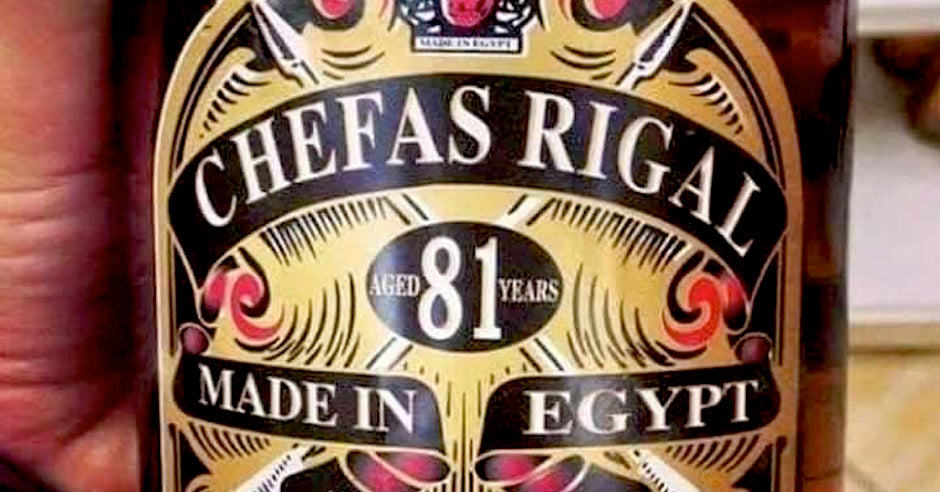 I love whisky labels. While regulations for what appears on a bottle are strict in most parts of the world, making it a challenge to be creative, there’s a whole segment of the market where they don’t care: counterfeit bottlings. I’m not talking about the intricately constructed fakes that pass undetected around the collectors’ world, I mean the dodgy bottles that are obviously fake to any whisky fan, including a lot of the folks who buy them.

From the infamous Johnnie Worker Red Labial to the design-your-own-label bottlings from the Aberlour website where enterprising individuals have added a vintage that predates the distillery’s construction, there are some obvious fakes out there. However, for me, one takes the biscuit: Chefas Rigal 81.

I don’t the know provenance of the photo of this whisky, but it appeared on the internet a few years back and has been posted many times since. What impresses me most is that almost everything on the label is incorrect: 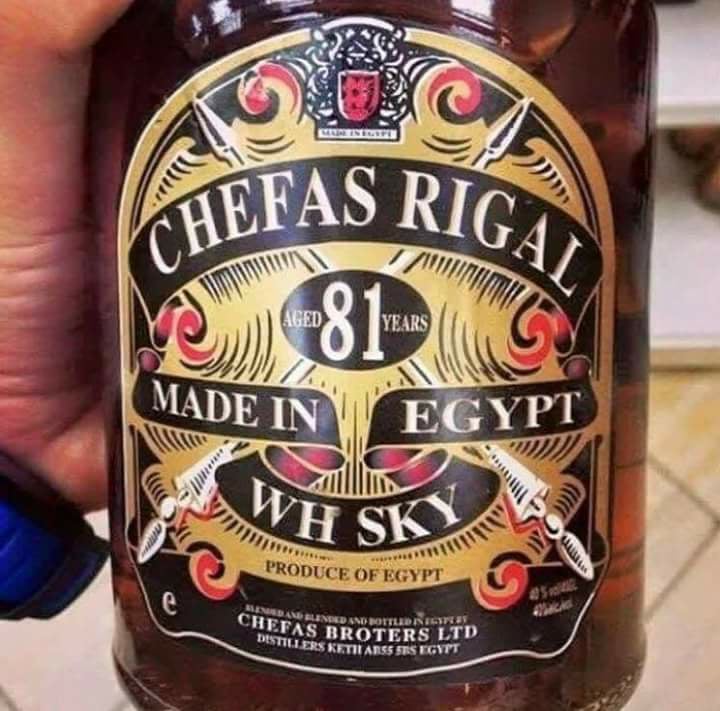 Firstly, there’s the name. It’s obviously a play on Chivas Regal 18 year old, but it’s been reproduced phonetically by someone I assume is not a native English speaker. I suspect that this may be how it is pronounced in some parts of Egypt.

Then we move on to the age. When it comes to bold claims, 81 years old is impressive – the oldest commercially released whisky is Gordon & MacPhail’s Mortlach 75 Year Old. While there’s a chance there was distilling happening in Egypt back then – it had been a British Protectorate and while we Brits left destruction behind us as the empire contracted, we did also leave a load of distilleries – I’d be very surprised if this was 1930s-vintage Egyptian whisky. The selection of 81 struck me as strange, until I remembered that Arabic is Egypt’s official language and it’s written right to left: another nod to the Chivas 18.

Next up is a departure from the bottle’s pretend-Scottish roots: the references to it being ‘Made in Egypt’. While I can’t find any record of distilleries in Egypt today, there is a thriving drinks market, so there’s probably one somewhere. Not only does this bottle proudly proclaim its source as Egypt across the centre and bottom of the label, but also in the crest at the top. The crest itself, and the rest of the background of the label, reminds me of the graphics of a ZX Spectrum conversion of a 1980’s arcade game: vaguely the same shape, but missing the core concept by a country mile and gussying things up with weird colours. To add some more fun to the mix, there’s a good chance that this is not actually made in Egypt, almost certainly being at least in part some imported bulk whisky, maybe mixed with locally made booze. And E150a.

They’ve covered all the bases when it comes to strength: 40% vol and 40% alc/vol are exactly the same thing, and 40GL – 40 degrees Gay-Lussac – is only very slightly different (measured at 15ºC rather than 20ºC). And while the use of the oversized e on the left side of the label implies that the quantity of the contents is estimated, they don’t actually have any indication of how much liquid is in the bottle, which makes it less useful.

Down at the bottom there are three lines that make me inordinately happy:

Line 1 – “Blended and blended and bottled by”: blended twice, it seems.

That leaves us with the label’s crowning achievement. The focus. The bit that tells you what is actually in the bottle:

Good work Egyptian fakers. You are the winners.