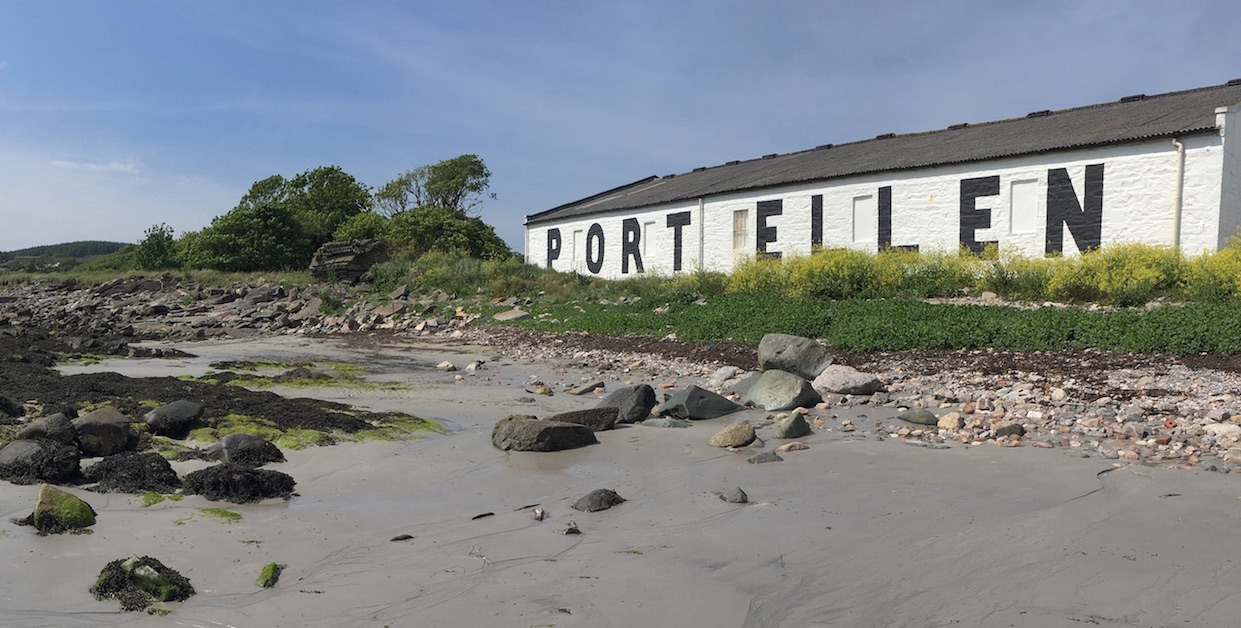 Yesterday’s announcement from Diageo about the ‘reopening’ of Port Ellen and Brora caught the whisky world unawares. At first, it made no sense to me, but after a day of mulling it over, and reading interviews and the internet, it’s started to come together. Here’s a round up of what we know and my thoughts.


A short history of Port Ellen

For a distillery with such a legendary status, the history of PE is surprisingly short. While it started in 1825, the distillery as we know it appears in 1967. It was rebuilt after a 1930 mothballing, with its stills doubled to four, and started making whisky again. In 1973 its drum maltings were installed and in 1983 it closed – it was only open for 16 years. With Caol Ila rebuilt in the early 1970s, it was the obvious choice to disappear in the downturn, especially as the site could then be dedicated to malting.

In 1990, the stills disappeared, shipped abroad, and the distillery buildings were repurposed or knocked down. The maltings remain, and now supply malt to most of Islay. To start up a Port Ellen distillery again, they’ll need to rebuild it pretty much from scratch.

A short history of Brora

Brora’s history is a only a few years longer than Port Ellen’s, but again the distillery as we know it was around for a surprisingly short time. Founded by the Duke of Sutherland as Clynelish, it ran pretty much constantly through until the late 1960s. A new distillery was built next door, and the two ran in parallel from 1967 until 1969, when the old distillery closed. However, it shortly reopened as Brora and started distilling again, initially filling in a gap in smoky whisky production due to Caol Ila being out of operation at the time.

It continued until 1983, when it closed again thanks to the industry downturn that also did for Port Ellen. Like Port Ellen, it was an obvious choice to close, with another, more modern distillery next door, in this case literally built to replace it.

Diageo’s press release lists a few points and these have been added to by interviews with Dr Nick Morgan – the company’s Head of Whisky Outreach or, as The Whisky Sponge calls him, Diageo’s Master Human Shield: ScotchWhisky.com, The Spirits Business.

That all sounds good, although as the ranty Dead Bottle Collective has pointed out (warning: link contains disrespect for Brora that can never be forgiven. And swearing), this is not, especially in the case of Port Ellen as simple as ‘turning the stills on again’.

What do they need to do at Brora?

When I visited Clynelish back in 2012, I peered through the dirty windows of the Brora still house and was confronted by bird-poo-spattered stills that would need some serious work to get running again. A listing with Historic Scotland that restricted upgrade work to the buildings was also a major obstacle to any rebuilding.

Despite still being listed, it seems that Diageo have come to an arrangement, as tales of them clearing up the place and polishing up the stills for at least the past year have now emerged. They will still need to refurbish the equipment and plumb everything in again, along with bringing in new heating and whatever other innovations that have appeared over the past 34 years that they will inevitably want to use.

They also have warehousing already, and with some movement of casks down to Diageo’s main maturation facilities (most Clynelish is already matured elsewhere and the on-site warehouses are filled with a mixture of casks from distilleries across Scotland) they should have space to store enough casks to fulfil the promise of on-site filling and maturation.

Is there any of Port Ellen left?

Port Ellen doesn’t actually exist any more. The famous white-wall-with-the-distillery-name-on that’s at the top of this post is one of the remaining warehouses, and pretty much all that remains of the distillery buildings.

In the picture above you can see the double-pagoda roof of the original distillery in the centre. The plan is to to drop a new distillery into the courtyard to the south of it – the site of the old distillery. The warehouses are there already, right by the sea, and with a bit of a clear out they’ll be ready to go.

Not many details have been given of production, other than ‘replicating where possible the distillation regime and spirit character of the original distilleries’ and ‘cask filling and traditional warehousing will also be included on the sites of both distilleries’. However, as they’ve not even put in for planning permission to build them yet, I’d not expect them to have that locked down yet.

One question that came up online, was what barley they’ll use. Other than Dr Nick’s comments that it will be 20ppm, we don’t know what it’ll be yet, and I would hope not – things change quickly in the barley world, and we don’t know what strains will be in vogue and available in 2020, when they will actually need the barley. Both distilleries used standard distillers barley, focusing on yield, back in the 1970s, so a switch to heritage varieties wouldn’t fit in with the plan.

Oliver Klimek mentioned on Twitter that he hoped they would use floor-malted barley, which I think would be a mistake – the whiskies that made both distilleries famous would have been made using drum-malted barley:

If they’re trying to replicate the spirit character of the distilleries at close, then using Port Ellen’s own drum malt and Talisker-spec malt from Ord is probably the way to go – options that fit in with Diageo’s plans.

At first I couldn’t work out the point of reopening the distilleries. However, a comment on Facebook by Jordan Devereux made it all click – ‘They are basically going to be new distilleries. At best I expect this will be like the resurrection of Ardbeg’.

The resurrection of the names will help them sell 15 years from now, when ongoing spirit finally hits the market, but I think the main point is that Diageo wants a pair of new distilleries to add to their portfolio.

At its heart, Diageo is a blending company, and the malt distilleries exist to provide blocks of flavour for the blenders to work with. Spirit with the character of 1970s/1980s Port Ellen – medium-peated Islay malt – and Brora – combining smoke with the traditional Clynelish waxiness – isn’t made elsewhere in Diageo’s estate, so their return makes sense. There’s no doubling up of production, it’s old-school flavours being made available again.

Adding these two distilleries gets Diageo not only two new flavours to add to its palette, but also a pair of new single malts with historic names. It now all starts to make sense.

5 Replies to “Port Ellen and Brora: The Resurrection”