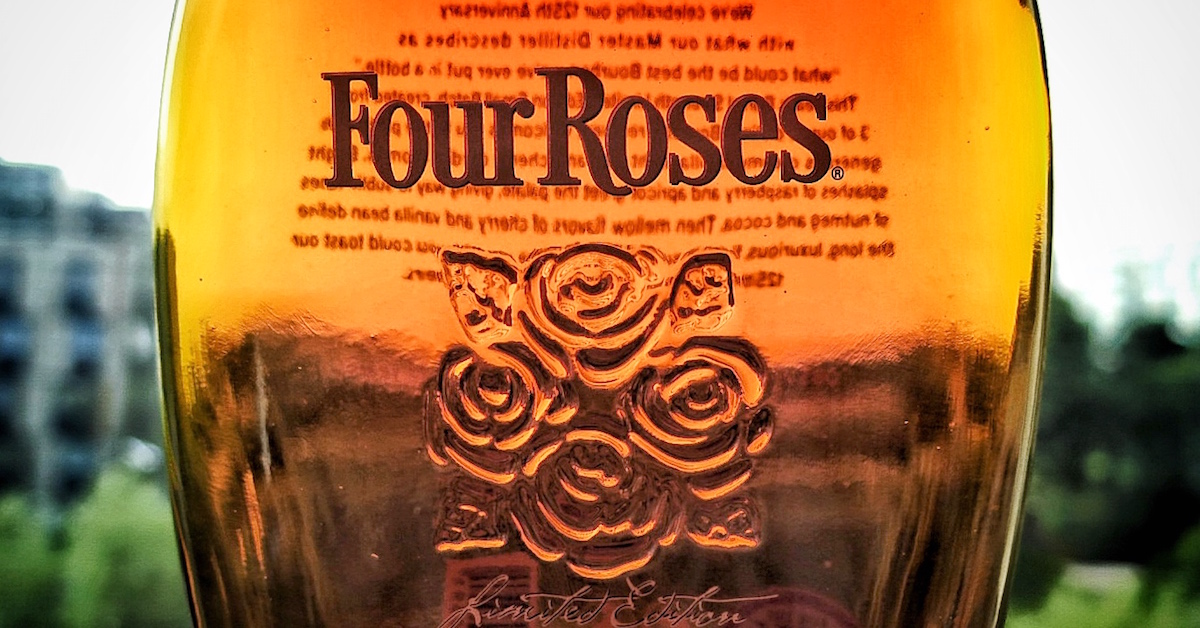 Every year, a new part of the distillation process or an ingredient seems to be ‘the most important bit’. Sometimes it’s the grain, sometimes it’s the water, sometimes it’s the stills, but almost every year the geekier whisky fans start talking about yeast – one of the key flavour creators in the whisky making process. And when it comes to yeast, there’s one distiller who does more than most – Four Roses.

The name Four Roses was trademarked in 1888 by Paul Jones Jr, a grocer who had moved his business from Atlanta, Georgia to Louisville, Kentucky a few years earlier. Jones claimed a history for the brand back to the 1860s, leading to suggestions that he may have acquired the name from Rufus M Rose, an Atlanta distiller who started producing a Rose Whiskey in 1867. However, the history is muddy, and changing marketing stories over the years have muddied things further.

After Jones died in the early 1890s, the company was taken over by his nephews. When Prohibition hit in the 1920s, the company bought the Frankfort Distilling Company and the Old Prentice distillery. While the distillery was shuttered, it was granted a license to supply its existing stocks of whiskey for medicinal purposes.

With a brand name that was known through Prohibition, Four Roses became very successful after the repeal. As the biggest selling bourbon in the USA from the 1930s onwards, it caught the eye of Canadian distilling giant Seagrams. Four Roses was bought by the company in 1943 and things soon changed.

Seagram’s was a blending company, and while that was great for its Canadian and Scottish whisky divisions, Four Roses didn’t quite fit the mould. The company introduced a blended whiskey alongside the bourbon, which sold well. Despite its continued popularity, the flagship bourbon was discontinued at the end of the 1950s. While Seagram’s continued to produce other bourbons, including Four Roses for the overseas market, Four Roses was relaunched in the USA solely as a blended whiskey.

In the USA, blended whiskey is quite a different thing to the more commonly known Scottish blends. You don’t often see them outside of the country for good reason – they’re generally not very good. With a minimum of 20% straight whiskey, and the rest made up of neutral spirit and other whiskey, they’re some of the most bottom shelf bottles available. While the original Four Roses blend was all whiskey, the relaunched version was far from it. With two thirds of the recipe neutral spirits, it was a much lower quality product and customers soon realised.

This pretty much destroyed the Four Roses name in the USA. To make matters even worse, Four Roses was hugely popular overseas – a great whiskey that you couldn’t buy in the country where it was made.

At the end of the 1990s, Seagram’s collapsed and its drinks brands were sold. They ended up in various hands, and Four Roses went to Japanese drinks company Kirin – with Four Roses already a best-selling brand in Japan and Europe, it made perfect sense for them to grab it. In 2004 Kirin relaunched the flagship bourbon in the USA, the first time it had been available on home soil for more than 40 years.

Since then, Four Roses has gone from strength to strength. The distillery now has numerous awards under its belt, and the core range of whiskeys is a benchmark for bourbon around the world.

Despite distancing itself from the dark days of the Four Roses blend, one part of production still harks back to those days – the distillery’s different recipes.

Four Roses doesn’t produce just one whiskey at its distillery, it makes ten. With two different grain recipes – mashbills – and five strains of yeast, the distillery has a wide range of different whiskeys to play with, and different combinations make up the various releases.

These days, the only distillery is Old Prentice (O) and the only type of whiskey is Straight Bourbon (S), making the codes a little simpler to pull apart.

The two mashbills are:

The yeast codes are:

For example, a whiskey made from the medium-rye mashbill and the rich and fruity yeast would be referred to as OESO. High-rye and delicately fruity yeast: OBSV. And so on.

The regular Four Roses Yellow Label uses all ten recipes, but the Small Batch uses just the K and O yeasts with both mashbills (four recipes: OESK, OESO, OBSK and OBSO) and the Single Barrel is all OBSV. To find the other recipes on their own, you need to keep an eye out for private and store-picked single cask bottlings. Fortunately Four Roses is popular enough that while it’s not easy to find all ten, they are all out in the wild.

Why so many recipes?

When Seagram’s bought Four Roses in 1943, they didn’t stop there, buying as many as fourteen other distilleries at the same time according to some sources. This not only included Four Roses but also four other distilleries in Kentucky, each with its own distinct character. Seagram’s standardised on two mashbills across all five distilleries, giving ten whiskeys. These were used to create the various bourbons and blended whiskeys that came out of the Seagram’s Kentucky operation, including Four Roses.

These days only one of the five distilleries still makes whiskey:

I’ve heard two stories as to why there are now five different yeasts used at Four Roses:

Whichever story is true, here’s how the yeasts seem to match up with the distilleries:

As with most stories from Bourbon country, there are holes and details that don’t quite make sense. Four Roses’s history has numerous different versions, and the company has been spinning yarns since the day it was founded. In the end, it’s the whiskey that matters – long may the stories continue.

Thanks to brand ambassadors Benji Purslow and Dan Priseman for putting up with my questions. There’s also a Diffordsguide article digging into the company’s history that gave me some more leads to work from.