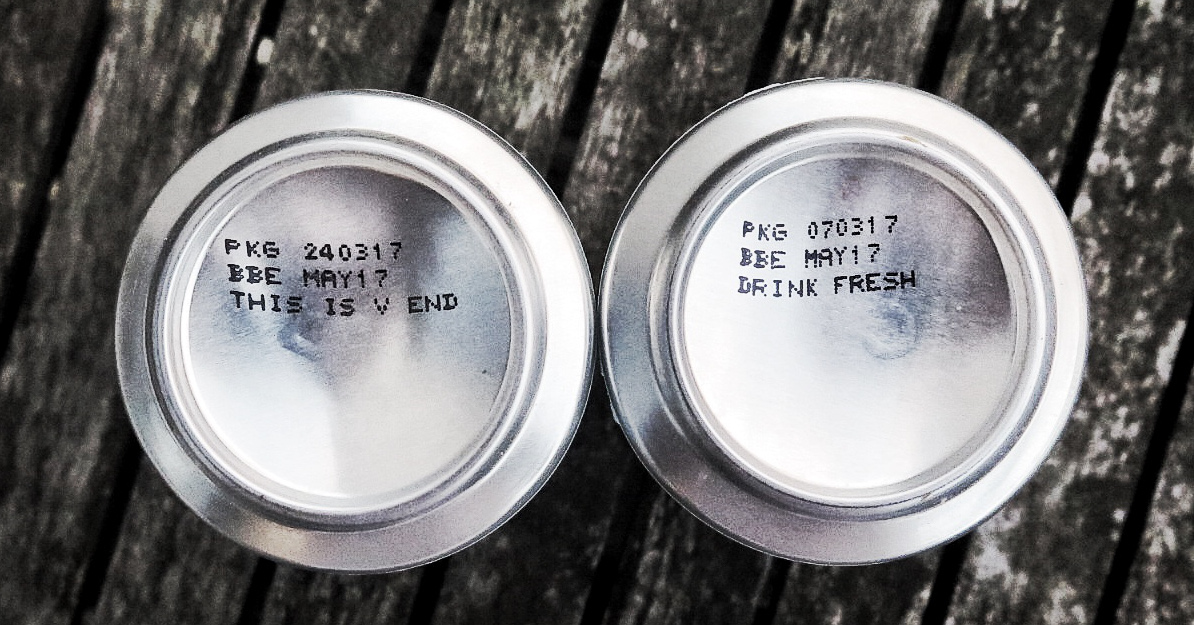 My recent post about fresh beer has made me change my attitude to beer almost as much as my first taste of new world hops. The past few weeks have seen me squinting at bottling codes in badly lit shops and regretting almost every beer I’ve bought in a restaurant. It’s also made me think a lot about the one indication that we usually have to give us an idea of how fresh it is – best before dates.

Just like with milk and bread, the best before end date is just an indication of when you should consume something by. It’s not an announcement of the date that the item in question will become toxic and kill you. The standard for beers that should be drunk fresh seems to be a year from bottling date.

The issue is that the beer is usually at its best long before the BBE, as my Lagunitas experiment showed. So, why give such a long best before time? Simple answer: business. Retailers need to sell beers before they hit their BBEs and shorter times add sales pressure. More sales pressure makes the beers less attractive to those selling them. As most drinkers won’t mind the taste of a slightly stale beer – or even one that’s totally off in many cases – there’s little incentive to make sales more difficult with shorter BBEs.

So as, we can’t trust BBEs, can we just assume a bottling date of a year before, and only drink things if they’ve been in the bottle for a short amount of time? We can, although working out the time limit has an added level of difficulty – how the beers are treated during their journey to our hands.

After my last post, Rich Dillon from Lagunitas – International Business Manager and Beer Guzzler – contacted me and asked which shops I’d got my older beers from, so he could get a local sales rep to look into it. As I’ve rarely had anything but fresh tasting Lagunitas on tap, I asked what the difference was between keg and bottles. The answer is logistics and cooling.

Lagunitas are part owned by Heineken, who now distribute their beer around the world. Whether you like the huge brew companies or not, one thing you do have to give them credit for is an ability to shift lots of product around the globe in a speedy and efficient manner. In the case of Lagunitas, once kegs are filled they are kept chilled until delivered to bars, and the stock is managed to ensure that they don’t get too old before being shipped out. With systems like this in place, brewers can be fairly sure that keg beer will reach the consumer intact. But as soon as the beer is out of their control, the potential for things to go wrong creeps in.

While brewers have a significant vested interest in keep their beers in the best possible condition for as long as they can, many secondary retailers of beers don’t have quite the same level of obsession. As soon as a container leaves a brewer’s care, all bets can be off. Shipping them in warm conditions, storing them next to the hot air outlet of the chiller in the cellar, leaving them in bright sunshine, losing them for six months at the back of a cellar – these are all things that won’t help and will swiftly make the BBE more of a nonsense. Kegs are one thing, but bottles and cans are a completely different matter.

From the last two weeks of my being hyperaware, there are things you can do: drink beer that doesn’t need to be fresh; avoid beer in restaurants and anywhere else if it needs to be drunk fresh and you can’t check the BBE/bottling date before buying; only shop at retailers you know are obsessive about their beers and will maintain correct shipping and storage conditions; only buy imported beer from producers/distributors that you know are actively concerned about the condition of the beer at point of sale – Pete Brissenden from The Bottle Shop tweeted in response to my last post that they are currently building a full cool chain and already ship beer cold from the USA, so folks are definitely doing it; drink more local beer in keg, can and bottle; or not care so much about the freshness of your beer.

I’m going to do a bit of all of them, including the not caring – sometimes I want a beer when I’m out for dinner.