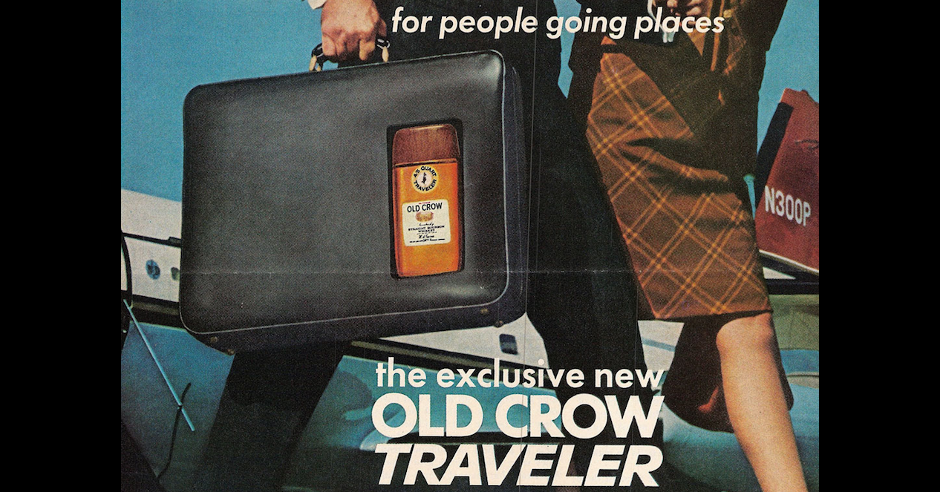 Compared with most forms of transport, air travel is still quite new. But what planes miss out on to hovercraft and helicopters in novelty, they win in numbers of passengers and potential for classiness. These days Easyjet’s rip-top pouches of cut-price vodka have cut into that class, but look back to the 1960s and you’ll find a golden age of air travel, or at least adverts claiming there was one. Then as now, if you have classy travel, you’ll almost always find a drinks company trying to cash in – introducing the Old Crow Traveler.

After World War II, civil aviation in the USA was a mess. Wartime mobilisation had stripped the airlines of their planes and personnel, but the huge expansion in the US economy that followed helped them to quickly replenish their ranks. By the mid-1950s, the market had grown massively and travel across the country by plane became more commonplace. As long-distance rail transport declined, air travel grew, maintaining an air of sophistication as it did.

In the late 1960s, Old Crow introduced the Traveler. A flat bottle with a strap to hold a fake-wood cover in place over the cap, it was marketed as being for frequent travellers who wanted to make sure they had good whiskey wherever they went. The Old Crow Traveler bottle’s profile was specially designed to make it the ideal fit for businessman’s briefcase – “the tuckaway fifth that packs as flat as your shirt”.

When the Traveler appeared, bourbon was at its height of popularity and Old Crow was the most popular American whiskey in the world. However, it was around this time that things began to go wrong. Bourbon began to lose its popularity as gin and vodka grew, and a recipe and flavour change for Old Crow led to steeply declining sales. The introduction of the Traveler was the beginning of the end for the brand, and by the early 1980s the distillery had been sold and closed.

I picked up a bottle at auction for a very reasonable price and have been waiting for an excuse to open it. A recent British Bourbon Society meetup seemed like the ideal time.

Nose: Lardy-cake brown sugar, sultanas, treacle toffee and barrel char. It’s surprisingly unspicy on the nose, with a creamy vanilla toffee note slowly building as it sits in the glass. That’s joined by hardened honey and candied lemon peel. Aniseed appears after a little while in the glass.

Palate: Rich and oily, with soft spice rolling in – cinnamon dusted sultanas and raisins. The treacle notes from the nose reappear along with hints of anise and sweet oak.

It may be a release from during the brand’s slow death, but it’s still very presentable. While the normal impression of older whiskies is that they will be heavier and oilier, this is similar in character to more modern bourbons. That said, it has much more depth than the bottom-shelf release of Old Crow you can currently find across the USA. Unfortunately, pretty much all old bourbon is shooting up in price, but if you can find an Old Crow Traveler for a reasonable price at auction, it’s worth a look.

You can find more about the history of the brand in my previous post: Old Crow Distillery – sour mash, setbacks and Glenns Creek.