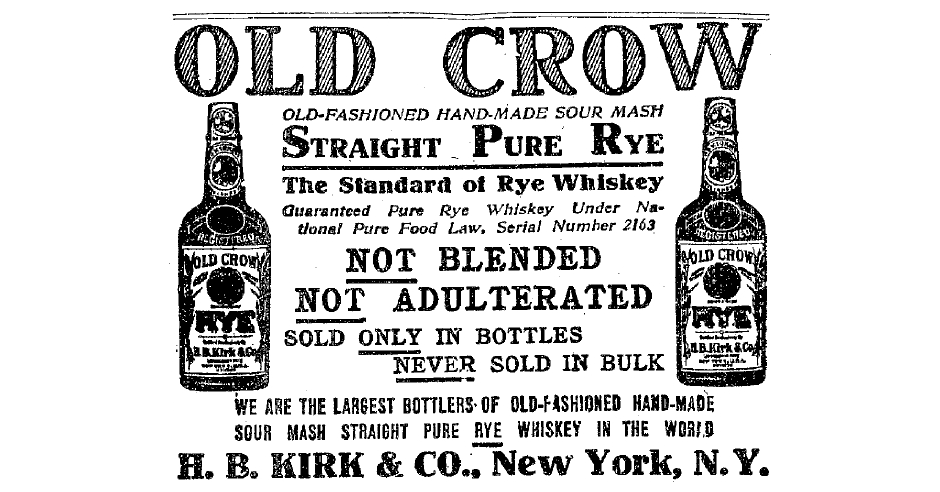 American whiskey history is full of lost distilleries and historic names. Many distilleries have fallen by the wayside over the years, but the names of their whiskies have continued on, produced elsewhere. I recently tried a whiskey from one of those closed distilleries, which got me reading a bit about its history – you might have tried Old Crow bourbon, but it probably wasn’t made at the Old Crow Distillery.

The story of Old Crow starts with the man the whiskey was named after, Dr James C. Crow. He was a doctor and chemist from Scotland, and is widely credited with adding an element of scientific rigour to whiskey production. More famously, he is often cited as the creator of the sour mash process, although it’s more likely that he merely further developed it. This is still used across the US when making whiskey and is a simple idea, where some of the leftover gunk from distillation – the backset or setback – is added to the next mash to make it more acidic – hence sour mash – a friendly environment for yeast, but not any other microbes that might try and infect it. It helps keep mashes consistent and is pretty much standard across bourbon production these days.

Crow arrived in the US in the 1920s and from the 1830s he made whiskey in and around Frankfort, Kentucky, and gained a reputation for producing great spirit. After starting his career at Grier’s Creek, Crow moved on to the Old Oscar Pepper distillery, now known as the Woodford Reserve Distillery. Some sources say that he then moved on to the Johnson Distillery – later known as the Old Taylor Distillery – about five miles up the road from Woodford, while others say that Crow stayed with Oscar Pepper until his death in 1856.

James Crow’s reputation was such that his whiskey was released under his name – Crow and Old Crow. The latter in particularly was popular, so it’s not much of a surprise that the name continued on after Crow died. He was succeeded at Old Oscar Pepper by William F. Mitchell, who produced whiskey to Crow’s specification. However, Pepper sold the remaining stocks of Crow’s whiskey and the name Old Crow to W.A. Gaines by the 1870s. Gaines went on to hire Mitchell in 1872 and then built a new distillery – right next door to the Johnson Distillery – to continue making Crow’s whiskey. The Old Crow Distillery opened in 1882.

Old Crow was a popular whiskey and continued to grow. After Prohibition, the distillery was bought by National Distillers, and after the second world war Old Crow grew to become one of the country’s most popular whiskies.

However, things went rapidly downhill in the late 1960s. During refurbishment and rebuilding at the distillery, the amount of setback was altered, significantly changing the flavour of the whiskey for the worse. Through the 1970s and 1980s, already a period of great decline for bourbon, Old Crow dropped in sales at an even faster rate than its competitors. The distillery fixed the recipe in 1985 or 1986, but it was already too late: National Distillers was sold to Jim Beam in 1987 and the new owners closed the distillery down. The stills and other equipment were removed by scrappers, and the distillery mouldered.

An ‘Old Crow’ whiskey continued to be produced by Beam, although using the regular Jim Beam recipe rather than that used at the Old Crow Distillery, and it is still available today. It’s a poor shadow of its previous self and is marketed as a cheap, bottom-shelf bourbon. A sad end to a once huge name in whiskey.

In 2013, the distillery was bought by Deviant Distillers, with a plan to refurbish and restart production. A still was bought from Lost Spirits in California, and under the new name of Glenns Creek Distilling, whiskey began to flow.

Most of the site still remains derelict, but the refurbished former bottling hall now houses production. Along with a bourbon – Glens Creek OCD #5 – the distillery also produces a rum inhouse, and bottles rye and bourbon made at MGP Ingredients in Indiana.

The distillery’s own whiskey may claim some continuation from the site’s original occupant, as the yeast used to ferment its mash was grown from samples retrieved from a fermenter on the site. It may be a wild yeast that has infiltrated the distillery since the 1987 closure, but it could well be a descendent of the yeast used to make whiskey to James Crow’s recipe – Glenns Creek OCD #5 could well have a touch of the old Old Crow.

Old Crow is one of the oldest names in whiskey, and while the currently available bourbon once looked like the end of the story, James Crow’s legacy looks to continue. Sitting in the middle of one of the densest populations of distillers in the USA and with an empty and historic distillery waiting to be used, Glenns Creek are in the right place to create a new chapter in the Old Crow story.