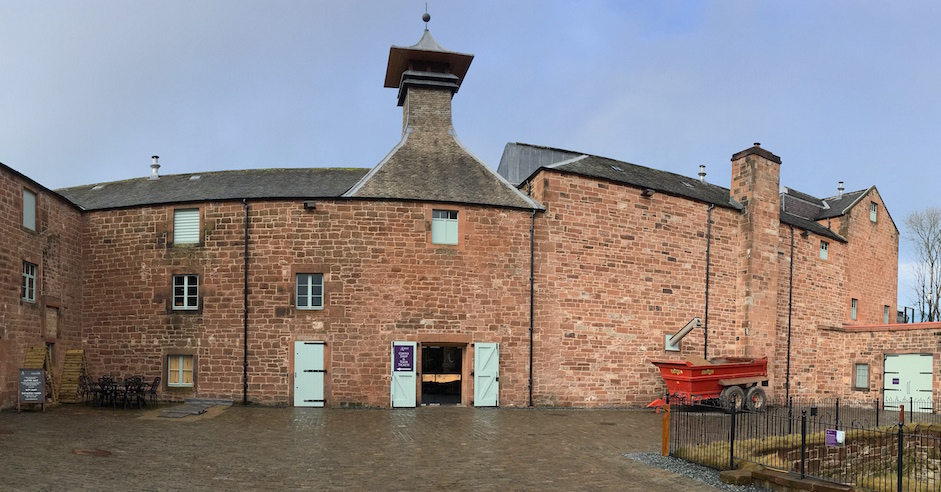 With distilleries popping up across Scotland, it’s no longer uncommon to visit one that is shiny and new. One of those shiny newbies is a bit different to the rest, with almost 200 years of history behind it – Annandale Distillery.

For years the Scottish Lowlands have been a quiet region when it comes to whisky production. The Highlands, Speyside and Islay have continued on, albeit with a few casualties, but malt distilleries in the Lowlands have slowly closed. There are now just three with whiskies to their names.

The new wave of distillery building has not forgotten the Lowlands. The region is ripe for new distilleries and new names are springing up from Falkirk to St Andrews. One stands out as not following the trend and has something that the others do not: history.

The Founding of Annandale Distillery 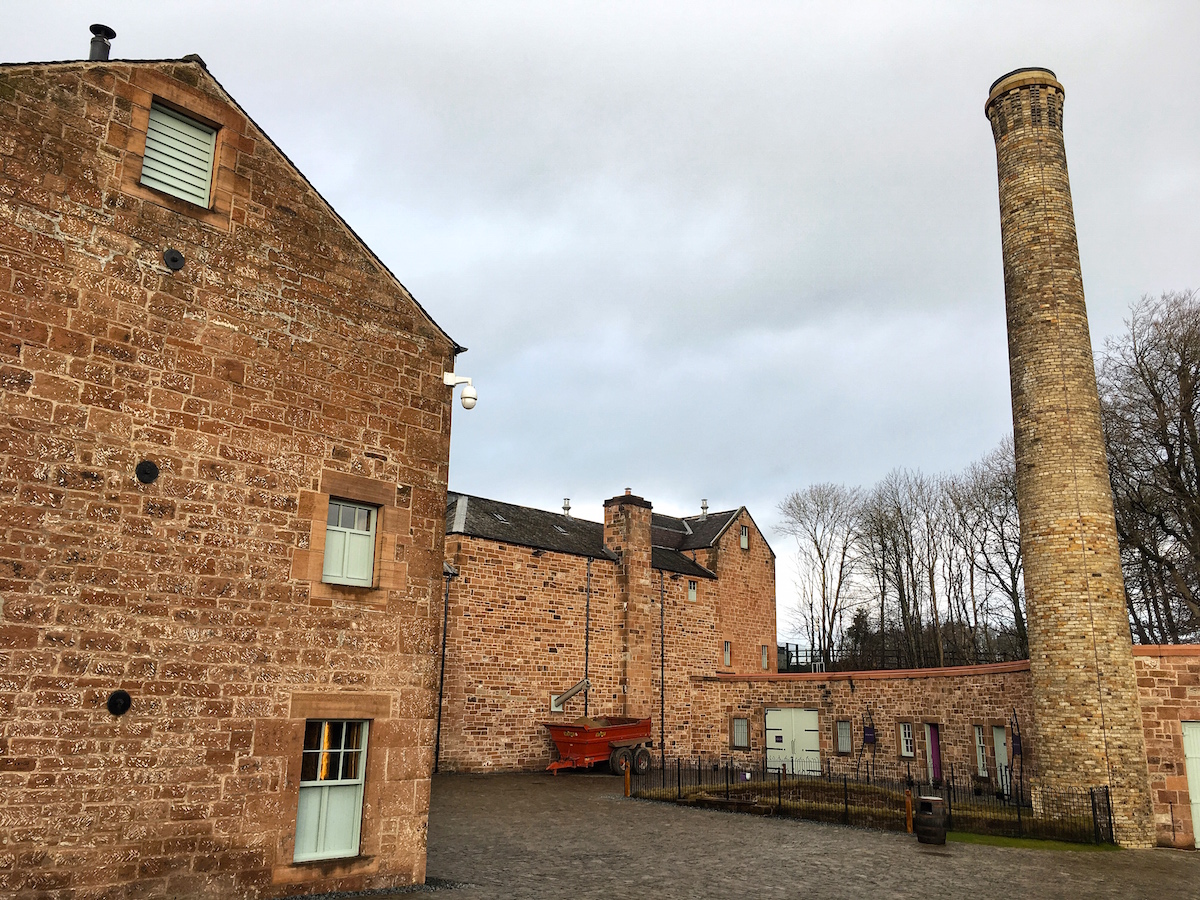 Annandale Distillery is just outside of Annan, a stone’s throw from the English border. Unlike the current crop of new whisky makers, Annandale was founded in 1830. In the time since then it has been closed for 93 years, but this new incarnation still looks to the past.

The distillery was originally started in 1830 by former exciseman George Donald, and until the 1880s it was run by him and his family. In 1883 they got out of the business, and it was leased to John S Gardner, son of a former mayor of Liverpool. While Gardner doesn’t sound like the typical whisky maker of the time, current distillery owner Professor David Thomson assures us that it makes sense: nearby Annan was a thriving market town and a stopping point on the way to the trading hub of Liverpool – what better way to export your whisky than to use your family connections in a major port?

In 1883, Mr. J. S. Gardner, of Liverpool, leased the property, cleared the buildings of all the old-fashioned machinery, and then re-arranged the whole place, putting in new plant, and all modern appliances used in distilling. 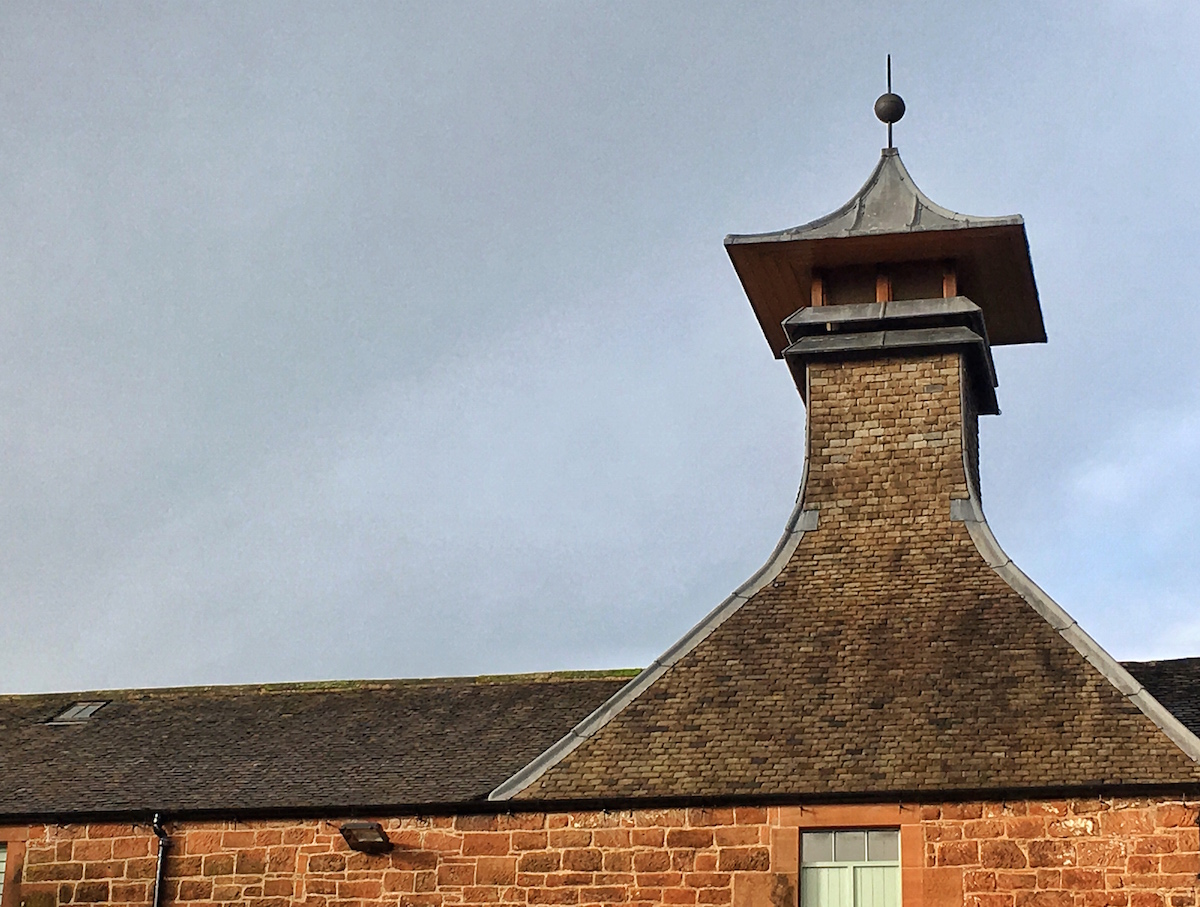 Gardner didn’t stay long, and by 1887 John Walker and Sons had taken over the distillery, the company’s second acquisition after Cardhu. In that short time, Gardner swapped the waterwheel for a turbine and steam engine, built a mesh-floored maltings – later updated by the Walkers with a design by Charles Doig, including his trademark pagoda roof – and the tall chimney that still stands at the distillery today.

The distillery stopped producing spirit by the early 1920s, and the site went back to being a farm run by the Robinson family. They were well-known producers of Provost porridge oats, and by the 1950s were using most of the distillery for storage and the drying of oats, cattle stabled in the bonded warehouses. Other than the collapse of the still house, the site remained remarkably intact and became a place for distillery historians to stop off while following in the footsteps of Barnard.

The Rebirth of Annandale Distillery 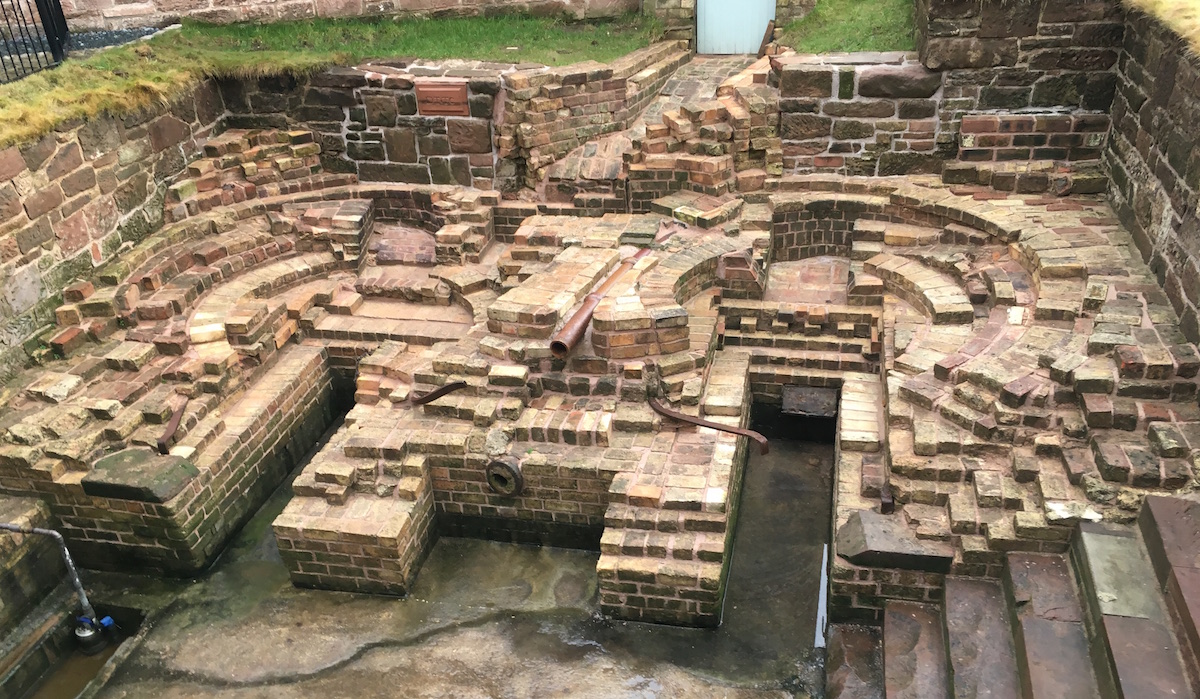 During the early 2000s, husband and wife David Thomson and Teresa Church were looking for a somewhere to make whisky. A love of the spirit and a will to found their own distillery eventually led to Annandale, which they purchased from the Robinson family in 2007. They began a long reconstruction project – the distillery buildings are listed, leading to many long meetings with Historic Scotland – which ended in November 2014, when the first spirit flowed from the stills.

The road to having a running distillery uncovered buried features of the site. While investigating the chimney built by Gardner in the 1880s, by this time standing on its own, they discovered the old still house, collapsed and buried sometime in the intervening 90 years. While the stills were removed – maybe to Cardhu – the fire pits, still supports and chutes for delivering coal are still easy to make out, giving a look into the distillery’s previous incarnation. 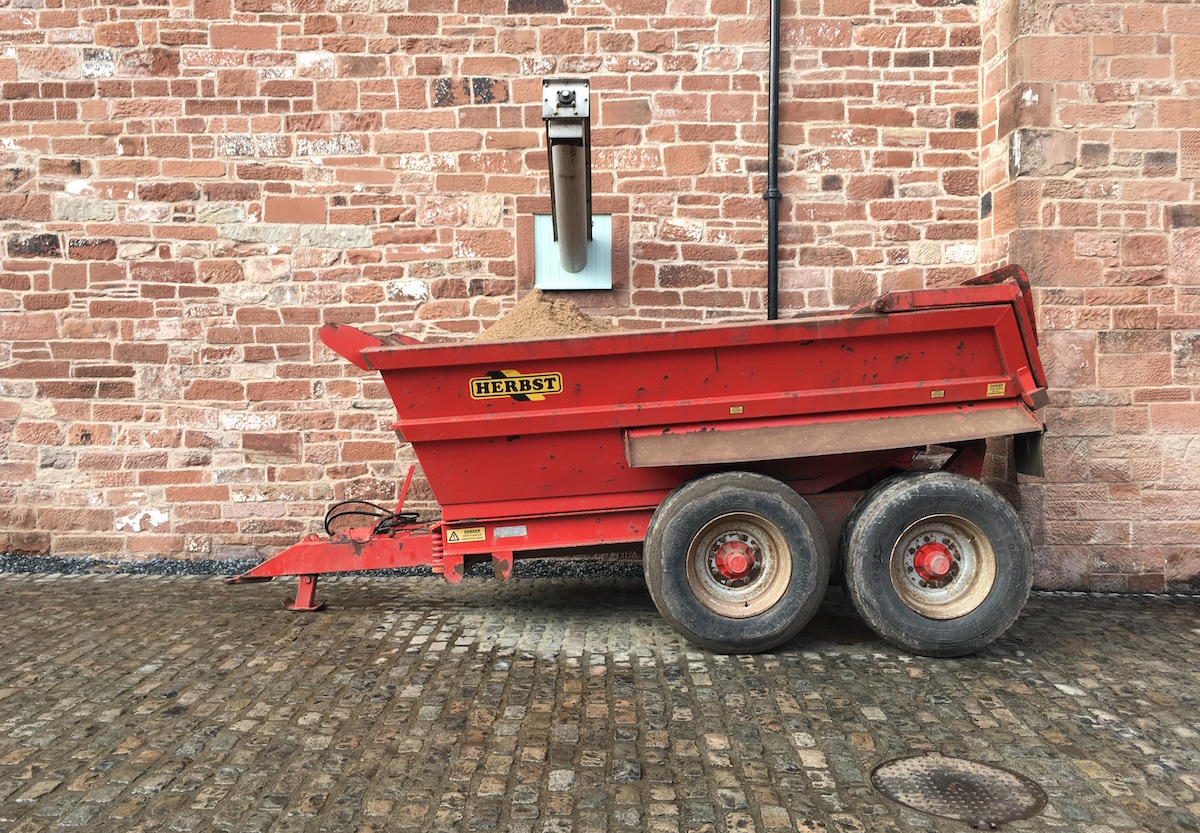 The new distillery is a mix of old and new, taking elements of Annandale’s traditional production processes and a more modern approach, and slotting them into the remaining distillery buildings.

The first historical nod is in the distillery’s malt. Lowland distilleries are mostly known for producing unpeated whisky, with their comparatively easy access to the transport network meaning that they would have had ready access to smokeless fuels for drying their malt. But, as Barnard noted during his visit:

The malt is raised by elevators to the Kiln at the end of the Maltings, which is floored with wire cloth and heated with peat.

David Thomson is not a man to ignore history, and Annandale splits its production between peated and unpeated spirit. The two makes have names inspired by two of Thomson’s other local historical interests: the unpeated spirit is called Man o’Words after Robert Burns and the peated is named Man o’Swords in honour of Robert the Bruce – Burns was an exciseman in the area during the late 1700s and Robert the Bruce’s family were the lords of Annandale. 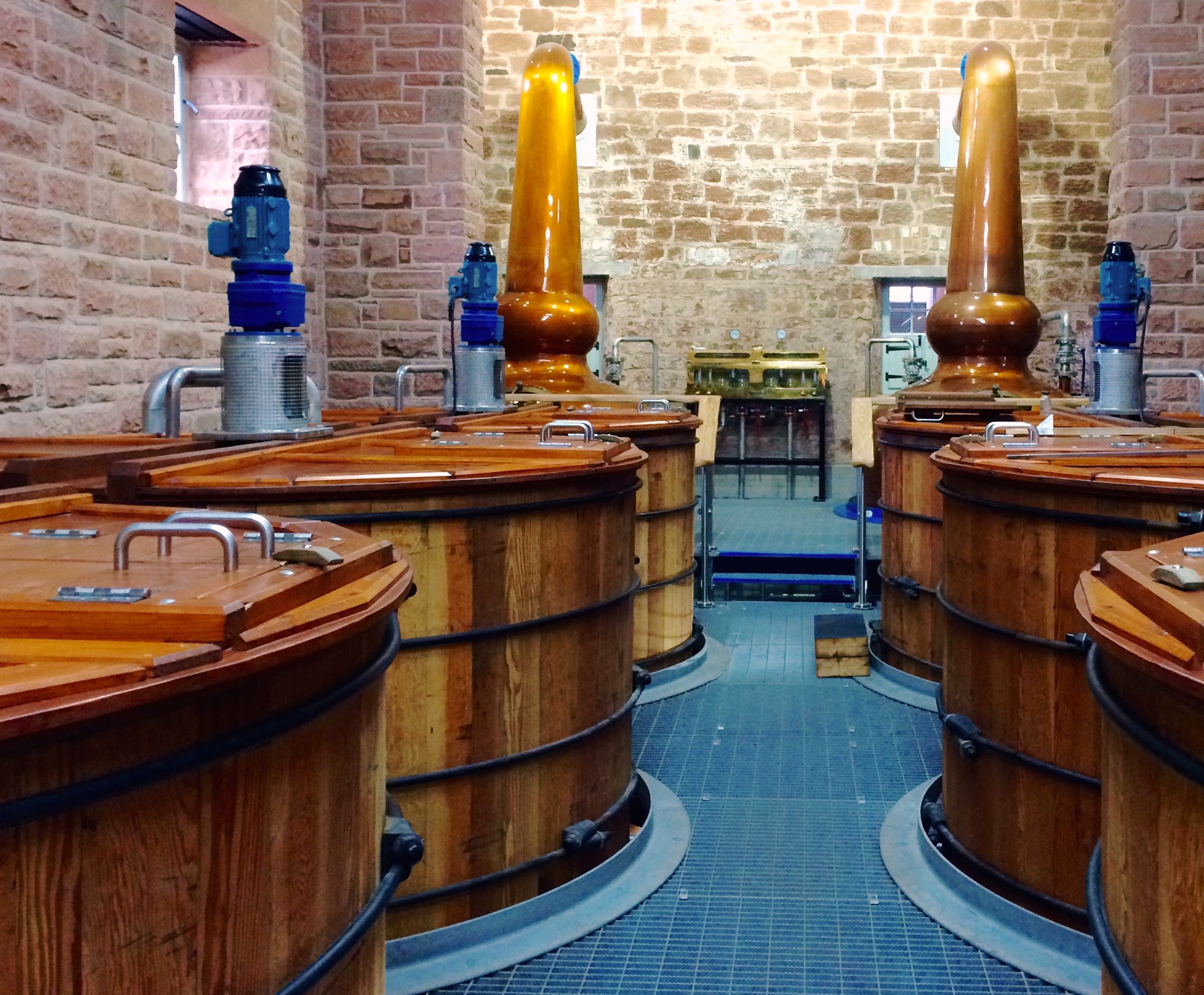 Production starts with 2.5 tonnes of barley – either unpeated or peated to 45ppm – run through a destoner and Porteus mill acquired from closed Caperdonich, before mashing and fermentation. The distillery ferments in six Douglas Fir washbacks, one for each day of the operating week. Fermentation varies from 62 to 96 hours, thanks to the distillery’s weekly day off, giving an 8% ABV wash.

Distillation uses a single wash still and a pair of spirit stills. The doubling of the latter and a design including a reflux-encouraging boil ball ensure more copper contact and a lighter spirit. Unlike the original distillery’s worm tubs, Annandale now uses shell and tube condensers to continue the theme of copper exposure, and focuses on producing a lighter style of spirit.

Annandale almost exclusively fills its spirit into bourbon casks – a mixture of first fill and refill. The owners have already scheduled the first release for November 2017, three years to the month since the spirit was laid down, and samples of the maturing spirit are encouraging. Even after just a year in oak, there is remarkable complexity and the rougher edges are starting to disappear.

Until the maturing new make’s third birthday, Annandale are releasing it unaged under the name Rascally Spirit. You can find my tasting notes here.

The Future of Annandale Distillery 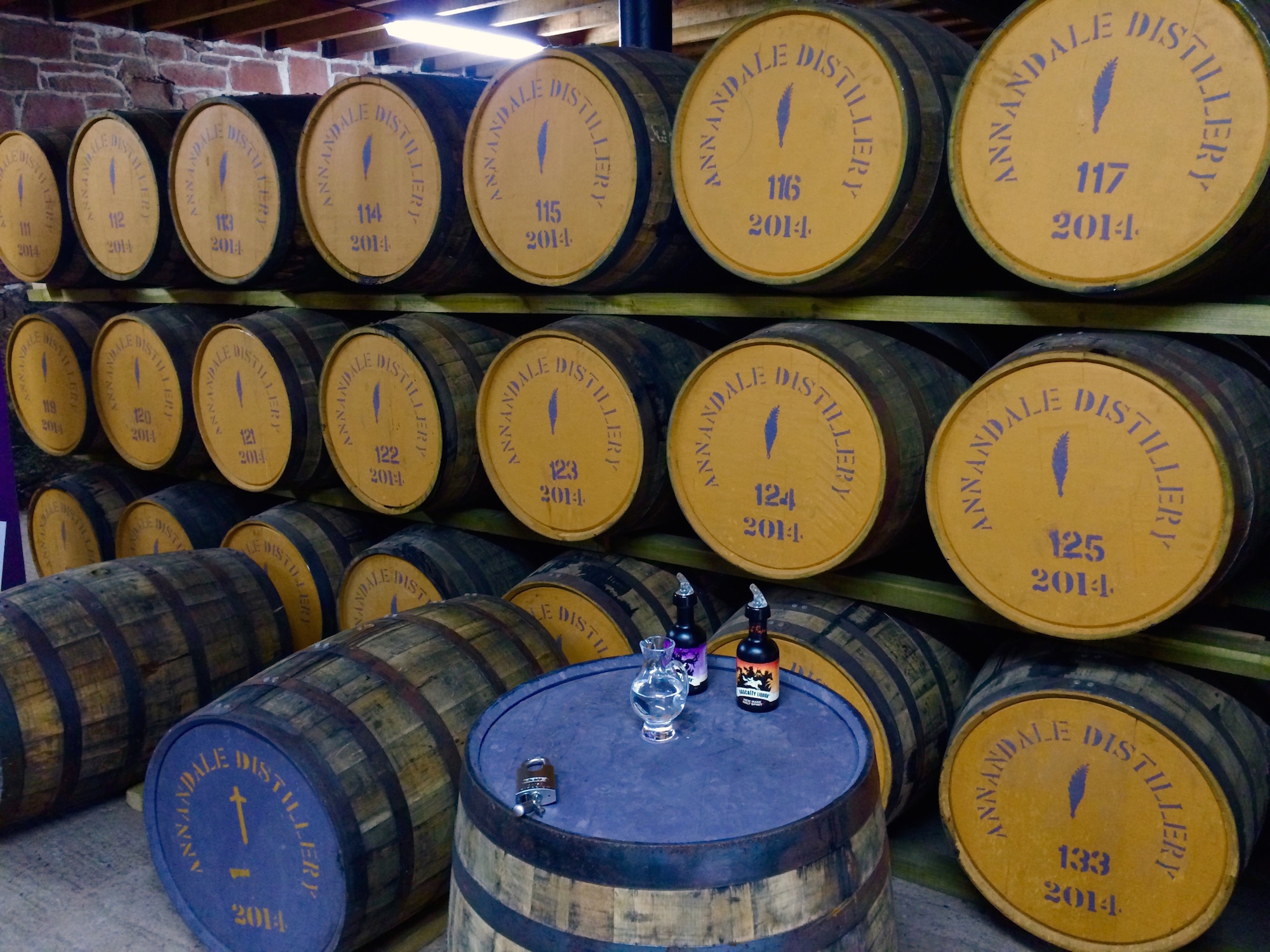 It may be less than a year until the distillery’s first whisky hits the market, but they’ve already made waves thanks to their cask sales. Cask number one went on sale for a headline-grabbing £1 million, with cask eight following not far behind at an incredibly lucky £888,000.

While these two have been very successful generators of publicity, Annandale has also been selling casks both to independent bottlers and individuals. During a recent visit, I noticed a few familiar names on the name tags stapled to the heads of the casks in the excise warehouse, both of companies and friends.

The distillery is not only focused on production, with an on-site café and visitor centre already busy and predicted to pull in 50,000 visitors a year to the Annan area. However, the arrival of its whisky will be the watershed moment. As the first of the new wave of Lowland distilleries to produce a single malt, Annandale will be the one that will set the bar. With both unpeated and smoky malt almost ready to bottle, there will certainly be enough flexibility to produce an interesting dram. We can just hope that the whisky will live up to the promise of the spirit.