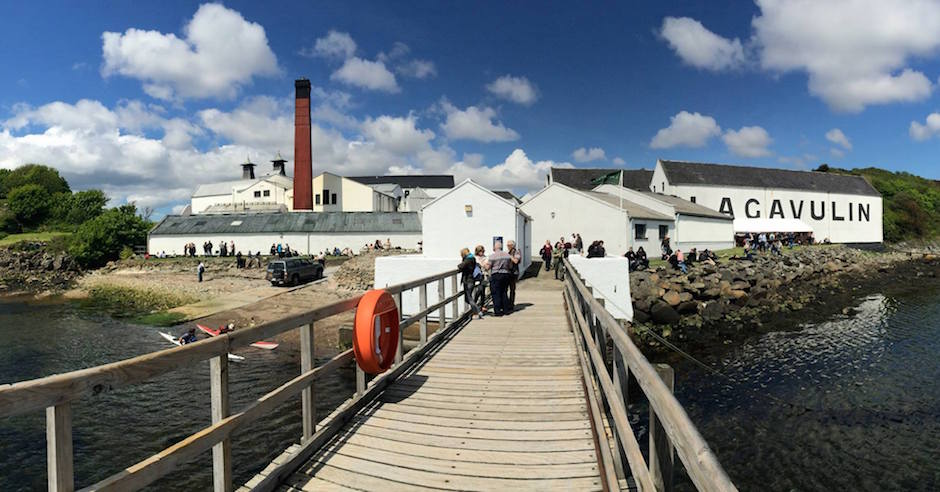 Lagavulin’s 200th birthday celebrations continue to roll along. The launch of an 8-year-old expression at the beginning of the year – and a second release mentioned for later on – and events at the distillery during Feis Ile have started things off, but there’s been rumours of another release since the end of 2015. That release has now been revealed – a Lagavulin 25 Year Old.

There’s not many details about it yet – it’s matured in sherry casks and will be bottled at cask strength, but that strength is missing from the press release and it looks like the bottles are still at the “here’s a rendering of what they will look like” stage of production:

I got to try it the London chapter of the birthday celebrations – a sit down dinner for 200, with a special dram as the final toast.

Nose: Leather, salty peat, seashells, salted butter and sharp sea-spray – it may have been the remains of a lobster platter sitting nearby, but there was a distinct whiff of salty seafood in the glass. Rounded Crunchie-bar sweetness and fruity notes sat underneath, with sultanas, rich fruit cake and dark chocolate. Punchy medicinal notes and bung cloth are balanced by elegant waxed jacket notes, barley sugar, fruit gums and a hint of barrel char.

Palate: Elegant, rounded and old, with youthful flashes. The waxed jackets from the nose sit at the centre, surrounded by a first layer of waxy apples and floral notes. Out from there there’s lemon and orange zest, and black pepper. Warm leather, loam and soft barrel char bitterness follow, with bungcloth, soft oaky notes and coal smoke following. Finally, there’s fruit, with apples and pears (singed) and tropical hints peaking out from behind the smoke.

I thought it was a great whisky, combining the elegance of older Lagavulins with the feistiness they’ve been showcasing in the 8 Year Old. I was surrounded by the remains of seafood platters and a room full of Lagavulin fans, so I suspect my opinion, but based on the evidence so far, it’s good.