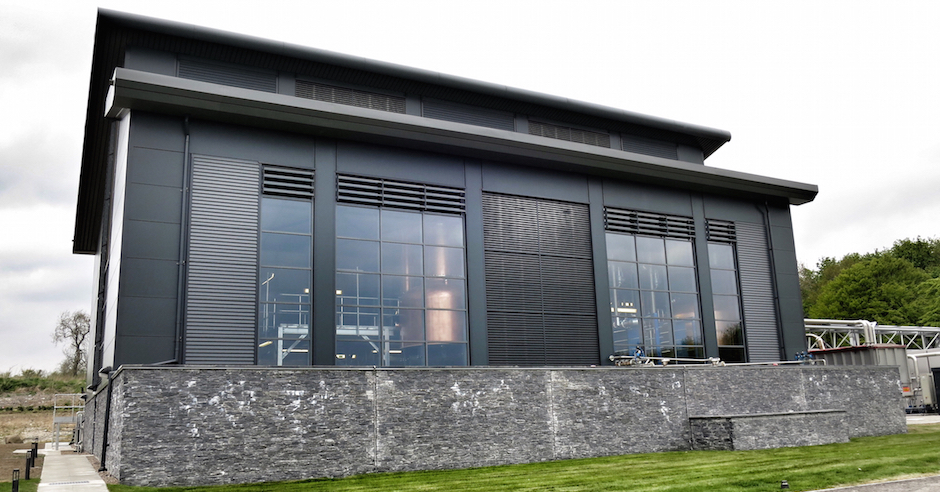 Inchdairnie distillery bills itself as ‘taking a bold, forward-thinking approach to producing Scotch malt whisky, while remaining respectful of tradition’. However, it’s the first half that is most noticeable when you see the distillery – with stark, Scandinavian influenced buildings, it’s certainly not a place where you’d expect to see a traditional pagoda roof.

Inchdairnie distilery has been designed from the ground up to be efficient, and in doing so uses some techniques that aren’t often seen in whisky making in Scotland. Firstly, rather than using the traditional roller mill – the Porteuses and Bobys that continue to sit at the heart of Scottish distilleries – Inchdairnie uses a hammermill. In most distilleries, this style of mill would produce too much finely milled flour, rather than the coarser grist that you need to effectively use a mash tun – while a high flour proportion allows more starch and sugar to be extracted during mashing, it can also cause the mash to ‘stick’, becoming gluey and unable to drain properly. Inchdairnie get around this problem by not having a mash tun.

Instead of the large vat you see at most Scottish distilleries, Inchdairnie uses the approach pioneered in Scotland by Teaninich and more commonly found in large breweries – a conversion vessel and mash filter. Rather than use the same vat to both mix water and grist, and filter out the solids, the two processes are separated. First, the water and finely milled grain are gently mixed and held at 65ºC to aid the conversion of starch into sugar. The temperature is then raised to 75ºC and the mixture is pumped to the mash filter.

The filter consists of a number of mesh bags – a bit like teabags, according to Inchdairnie MD Ian Palmer – which are filled with mash. As they get full, the liquid is pushed out of them as more mash is forced in. The filter then compresses the bags, forcing the rest of the liquid out. More water is then pumped into the filter to extract any remaining sugars, and the resulting liquid is divided between strong and weak worts tanks, with the latter being reused for the next ‘mash’. The mash filter approach results in the extraction of large amount of starch and sugar, which, along with carefully selected yeast strains, leads to more alcohol being produced during fermentation – the wash is pumped to the still at about 10% ABV, higher than the usual 6-8% found in other distilleries – and a higher overall alcohol yield after distillation. It also gives a very clear wort that is key to the desired spirit character.

The wort is mixed with yeast and left to ferment, but both the yeast and the fermentation are different to other distilleries. Rather than using traditional washbacks, Inchdairnie’s fermenters are more reminiscent of those found at breweries – closed stainless steel tanks, which sit outside the distillery building. They are not temperature controlled, giving another insight into the distillery’s plans – incorporating seasonality into its single malt.

Along with working with the weather during fermentation, the distillery will also use seasonal grain. While winter barley is not usually suitable for whisky making, due to its propensity to cause stuck mashes, the mash filter approach removes that issue. Through the year, the distillery will also vary the yeast strains used, creating four distinct styles of Inchdairnie. While the distillery is embracing seasonality, the spirit is still very modern in character, with the 60 hour ferment chosen to ensure to get the maximum conversion of sugar into alcohol, without picking up any of the flavours from other processes that are the trademark of long fermentations and old fashioned spirit.

In comparison to what goes before, the distillation process is relatively traditional, although done with a pair of pot-stills made in Italy rather than Scotland – not only is the waiting list at Forsyths very long, but Ian Palmer worked with distillery-builders Frilli during the construction of Starlaw, and they are behind much of Inchdairnie’s design. However, all is not as it seems. The efficiency drive extends to the distillation process, with external heating, thermo-vapour recompression and other techniques used to reduce energy needs – about 35% of the energy put into the distillation process is recycled. Each still also has a pair of condensers, one hot and one cold, ensuring both maximum contact between spirit vapour and the copper in the system and, again, efficiency, with heat reclaimed from both and recirculated into the system.

Like the rest of the site, the warehousing is modern – palletised rather than racked or dunnage. Casks are stacked six to a pallet when empty and are filled on the pallet through the cask head rather than the side – the bilge – as is more usual. Currently, about half of the casks filled are first-fill bourbon, with the rest being a mix of wine, sherry and other fortified wines. The pallets are then stacked in 1000 square metre warehouses, each with a capacity of 11,000 casks. While this dense storage does impact maturation, in Ian Palmer’s opinion it’s manageable, requiring about three months of extra time in the development of a three-year-old whisky.

The proof will be in the final whisky. With an almost stereotypically craft-distiller-like obsession with the ingredients and terroir – barley, yeast, seasonality – combined with large scale production and modern equipment – there is space to double capacity built into the distillery design, and they already have a third Lomond-style style part-installed for ‘experiments’ – no one knows what the result will be. Thanks to Ian Palmer’s ‘it’s ready when it’s ready’ approach, we’ll have to wait more than a decade to discover what the resulting single malt will be like. I look forward to finding out.