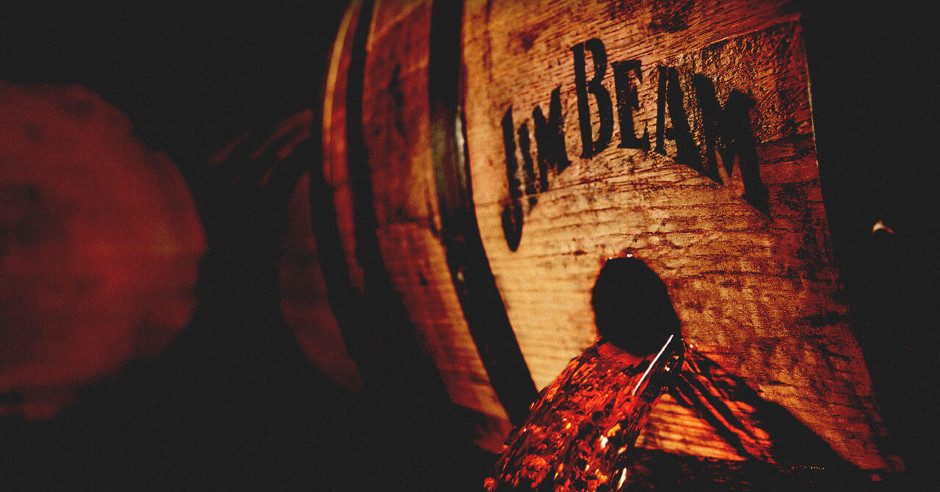 There has been much talk in recent times of the ‘bourbonisation‘ of Scotch whisky. There are a couple of different interpretations of what that means, and two of Jim Beam’s latest releases show that both may also be happening in the world of American whiskey, but in reverse – Jim Beam Double Oak and Jim Beam Kentucky Dram.

The first take is that as American whiskey is currently booming after years of being considered an old man’s drink – a status that Scotch whisky still labours with, despite advances in recent years – and that Scotch whisky, especially in the USA, is trying to grab some of that interest by making itself more like its American cousins. Releases like Dewar’s Scratched Cask and Johnnie Walker Rye Cask Finish attempt to associate themselves with American whiskies, but Jim Beam Kentucky Dram takes an opposite approach – it’s a bourbon with added Scotch.

Bourbon may be booming, but single malt from Scotland still sits at the top of the tree, and adding a splash of smoky whisky to Jim Beam’s classic White Label looks to be an attempt to push it up a few branches. It’s only available in travel retail, increasingly the home of experimental releases whether they be American or Scottish, which adds both another layer of exclusivity and a need to appeal to those who may not be as caught up in the premium bourbon market as US consumers are.

Palate: Less powerful than the nose, but shot through with sugared almonds. Sharp oak and cinnamon spice dominate, with chocolate Hobnobs and toffee apples providing rich sweetness. Barley sugar sweetness grows with menthol and clove to give a cough candy character with an undercurrent of very dark and damp oak, woody spice and a whiff of smoke.

The Scottish spirit in question is almost certainly Ardmore – it’s described as a ‘peaty Highland Scotch’, and despite the recent growth in the Beam portfolio due to merging with Suntory, Ardmore is still their only in house choice – a whisky already well-known for providing a smoky background in home-grown blends, especially Teacher’s. It performs a similar role here, adding a hint of smoke and weight without dominating. Peat heads looking for a whiskey to convert them to bourbon should look elsewhere, but it certainly works as a more sophisticated version of Jim Beam’s flagship White Label, more suited to sipping than hiding behind a wall of ice and Coke.

A second way of looking at Scotch whisky’s alleged bourbonisation, is the introduction of American whiskey-making techniques, product trends and flavour profiles into Scotland. Whether that’s using virgin-oak, small and heavily charred casks to mature spirit, or even the rise of sweeter column distilled grain spirit and flavoured whiskies, there is some evidence that the Scottish industry has been taking some inspiration from the American whiskey industry for a few years. However, Jim Beam’s most recent release again turns the tables, by using an approach more commonly associated with Scotch whisky – finishing.

Jim Beam Double Oak, as the name suggests, is double matured – ‘twice barreled’, according to the label. While finishing a whiskey is not new in the USA, Double Oak avoids the complex naming issues that using anything other than a new oak cask to mature bourbon invokes by using two of them. They take regular Jim Beam White Label at about four years old and then rerack it into heavily charred casks – #4 char, the infamous ‘alligator char’ – for six to nine months. The extra maturation should, in theory, add another layer of new oak spice while the heavy char acts like a charcoal filter, stripping out some of the rougher character of Jim Beam’s entry level whiskey.

Nose: Vanilla toffee and maple syrup, with toffee apple, candied ginger, chocolate raisins and a big hit of woody spice – clove and cinnamon especially. There’s a hint of vanilla cream behind the spice, as well as a savoury cocoa note.

The overriding note in Jim Beam Double Oak is as the name suggests – oak. Stacks of woody spice can make this a bit much on its own, but that does seem to be part of the point: it’s got the strength of character you need for it to be noticeable in cocktails. The whiskey’s signature cocktail is an Old Fashioned – sugar, bitters, whiskey and ice – and while this recipe’s use of two sugar cubes rather than one pushes it into being far too sweet for my palate, you can definitely taste the whiskey over the sweetness of the sugar and spice of the bitters. Lengthening it with ice also takes the edge off the oaky notes without losing too much intensity, making it a useful bourbon for those who, like me, enjoy a glass of whiskey with lots of ice, and would rather not have to drink it quickly due to dilution quickly killing the flavour.

The debate over whether Scotch whisky is being bourbonised – although that should probably be ‘bourbonized’ – still continues, but looking at the market as a whole, I see it more as a general exchange of ideas: these two Jim Beam releases are not the only whiskeys that have taken inspiration from Scotland. In my opinion, the challenge is maintaining an interesting and varied range of whiskies without a convergence to a mean – a generic “whisk(e)y-flavoured” drink – as popular styles and flavours become better known. Fortunately, the welcome belligerence and independence of many producers on the fringes of the flavour spectrum, and the loyalty and differing palates of their fans mean that we should be fine for a while yet.