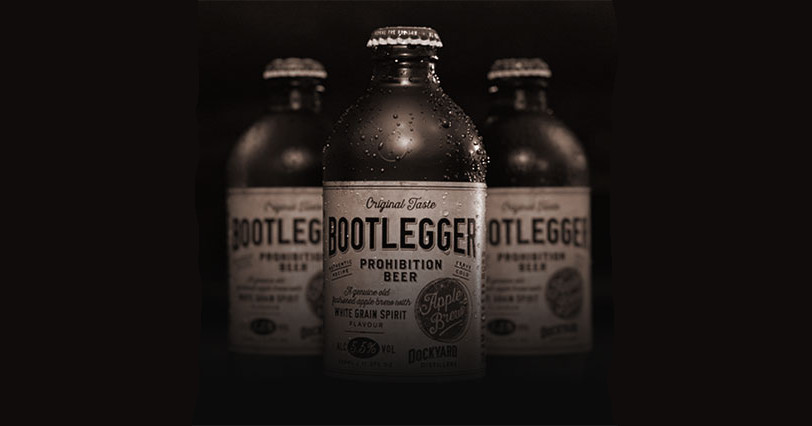 New year, new booze. And how better to start blogging in 2016 than a bottle from the shelves of my local Morrison’s.

In amongst the Chorley cakes – my new favourite thing – and packets of interesting bits of pigs, they have a very good range of drinks. However, there are some weirder things hidden next to the tasty beers, including today’s beverage of choice – Bootlegger Apple Brew.

Now, beer I know. I am also familiar with cider. However, ‘old fashioned apple brew’ was, until today, outside of my experience. Bootlegger’s beer is, from what I can discern from the label, a combination of beer, apple flavour and Bootlegger White Grain Spirit. Allegedly inspired by moonshiners sweetening their hooch with fruit juice – like all of the American distillers who have started making apple-pie- and lemon-drop-flavoured drinks from their new-make spirit – this seems to be similar but beer in the mix.

The Bootlegger brand started out in 2012 with their grain spirit, an unaged white-dog-like drink made from English and French wheat. It looked to capitalise on the craze for Prohibition-era things and tasted alright, if my vague memories of having tried it are accurate. The apple brew hit the on-trade market in early 2015, and seems to have now made its way into supermarkets, or at least, from the Ratebeer reviews and Google hits, Morrison’s. According to the bumph, it’s ‘targeted at the 22-35 male and female consumer demographic’, which doesn’t really distinguish it.

The folks behind it are Harewood International, who mainly distribute brands rather than make them. However, they have a subsidiary called Dockyard Distillers who produce the Bootlegger products. The company shares an address with a bottling company in, of all places, Chorley – home of the excellent cakes – but the beer element is almost certainly made elsewhere, if indeed there is any beer involved.

Normally I’d try and write interesting tasting notes, but it’s really not worth it for this. On the nose it smells of really cheap apple juice and it tastes the same, but watered down – a bit like vodka and Appletizer after it’s gone flat and the ice has melted; if there’s any beer in here, then it’s not added any distinctiveness of its own that I can taste. There’s almost no carbonation, and what fizz there is dissipates quickly. The lack of any really booziness could be dangerous in a 5.5% ABV drink, but the sweetness will stop anyone from drinking many of these.

In short, it’s an apple alcopop. It’s a product that’s trying to do too much, hooking in with the current ‘beer is cool’ phase that we’re going through as well as trying to flog the now very ill looking horse of Prohibition era drinks, and it doesn’t really tick any of the boxes. But worst of all, it doesn’t taste very nice. It’s appearance in Morrison’s is either a sign of it doing well in bars or really badly in bars, but either way I suspect it will either disappear or remain relatively unknown, like the Buddy’s and Dead Crows of this world. Unfortunately I don’t think it will be much of a loss. I’ll stick with Chorley Cakes. With a slice of Lancashire.