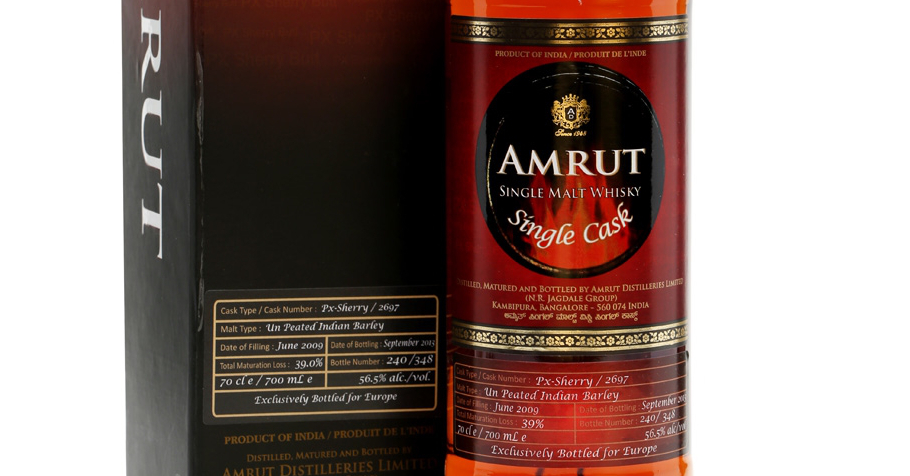 Tis the season of advent calendars, and the latest craze is to fill them with booze. Now, I’ve not actually got one – I do work for a drinks company in direct competition with the folks who make the calendars, after all – but everyone else with a whisky blog does and I feel left out. So, I’m going to write about a different whisky every day in advent, and as I don’t have an actual calendar, my whiskies should be different to everyone else’s. Here’s the first: Amrut Single Pedro Ximénez Cask #2697.

I first tried this back at Maltstock in 2013, at an excellent class led by Ashok “I’m really not James Bond” Chokalingham, Amrut’s excellent brand ambassador and all-round nice chap.

The previews of Spectrum, Amrut’s latest whisky, had a bit of a secret agent edge…

He dropped this and some other single casks into his tasting as a sneak preview, and despite them appearing on the market back then, there are still a few bottles left. Fortunately, I had one to hand, and decided that this would be the first of my advent whiskies.

Nose: An intense sweet and savoury sherry cask assault. It’s the classics: sticky raisins, roasted meat, marzipan and cherries (Cherry Bakewells, without the royal icing), nutmeg, cinnamon and a hint of liquorice. However, there’s more to it than that, with buttery frosting, fruit jelly, green leaves and behind it all, some stewed rhubarb – sweet, sour and very fruity.

Palate: Initially very grainy – a punch of freshly crushed barley and rolled oats – which is a shock after the nose. However, the sherry doesn’t sit in the wings for long, and rich wine notes and layers of tingling spice quickly roll in. It’s got a lot of bitter barrel char notes, but they are carefully balanced by dried fruit, bittersweet dark chocolate and a background of sweet and sour red berries.

This is, as you might expect from an Amrut whisky aged in an active PX cask, it’s a bit over the top and very intense – it’s only four years old, but the cask lost 39% of its volume in that time. However, as a first dram of advent, with the remains of Storm Clodagh blowing around outside, it felt appropriate. Silly, sherried and full of fruit – some from the cask and some from the spirit. A good start to the month.