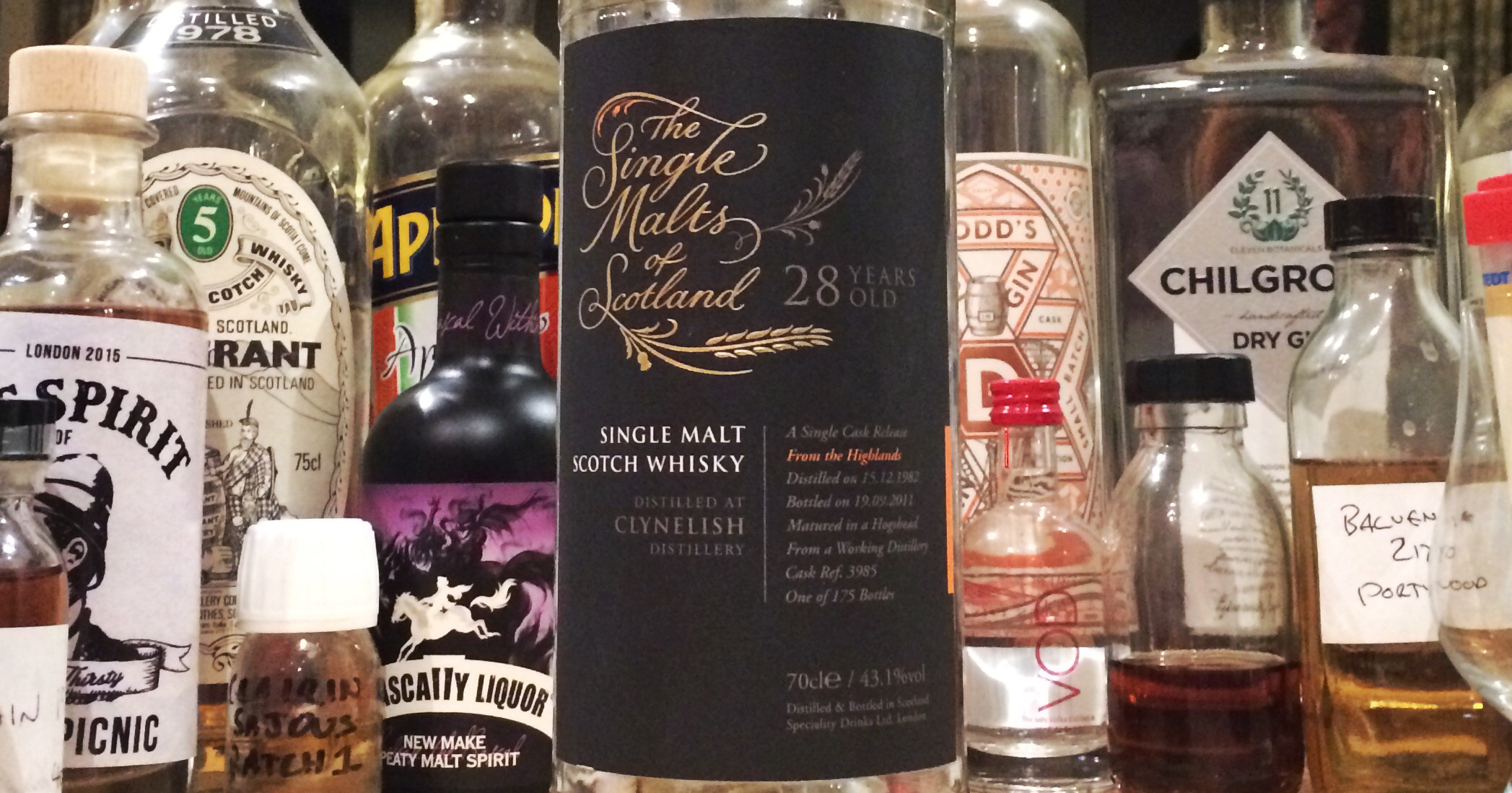 A quick post this, as it’s one of our busiest days at work, I have a tasting to attend this evening and yesterday afternoon, when I actually wrote this, I had a brewery open day to go and drink at. It’s a hard life.

[I’ve just looked over this before publishing, and it worries me that I count this as a ‘quick post’…]

For day #14 I present one of my favourite whiskies of all time: Single Malts of Scotland Clynelish 1982, 28 Years Old.

When I started working at The Whisky Exchange almost five years ago, I was not a purchaser of expensive whisky – I’d not spent more than £50 on a bottle, and didn’t quite get why someone would. Over the first few months of being immersed in the world of whisky full time, I started to understand, and by my first Whisky Exchange Whisky Show, I was ready to take the plunge and spend decent money on a bottle of whisky. If it was worth it.

The first expensive whisky that I grabbed was a Single Malts of Scotland Clynelish 1972, bottled at 38 years old. the Single Malts of Scotland are bottled by a sister company of The Whisky Exchange, Speciality Drinks Ltd, and the 1972 was on the stand I helped on at the show. I was already a big Clynelish fan, and it pretty much blew my mind – so delicate and floral, with lots of depth and a huge finish. I snapped up a bottle as soon as I got back to the office, immediately opened it and found it to not quite be as good as I remembered. It’s still excellent, and I still have the remains of the bottle four years later.

The line-up – Port Ellen, 1974 Glenallachie, old Brora, 46-year-old Lochside and a Clynelish 1982. That was a good year to be working the show bottlings stand…

However, m’former colleague Tim didn’t agree with my purchase. He reckoned that the 1982 that we were also pouring was better, and after I opened my bottle of 1972 he sat me down with a glass of the 1982 and told me to compare them. As usual, the git was right, and I was forced to buy a bottle of the 1982 as well. Before it sold out, I managed to grab a few more bottles and they remain in my stash, awaiting a special occasion.

Nose: A sweetshop – candy teeth, pink shrimps, hard candy letters and necklaces, white chocolate bobbly buttons, tom thumb drops and rose Turkish Delight. The traditional waxy distillery character is here in spades, with both musky beeswax and floral scented candles out in force, and there’s a touch of candied lemon sitting at the back.

Palate: Soft with a big background of oak – I think I’ve left the bottle open too long. The sweetness from the nose is mixed with spicy oak and some dry wooden boards – the sweetshop is still here, but skewed to sour and fizzy sweets, with Refreshers (both chewy and chalky) and Sherbet Dip Dabs making an appearnce. Floral notes are heavy at first, but fade to a real, sour flower petals and damp oak.

Finish: Floral and sweet with some oaky spice and a gentle sourness that fades away to apples and pears, before a waxy resurgence leads it to a final death.

This bottle isn’t as fresh as I’d like, and it’s gone slightly more sour than at its best, but it’s still an excellent dram – very pure Clynelish character, with wax and orchard fruit, as well as the sweetshop assortment that I find in many of the whiskies I love. All that remains is to work out what kind of occasion is special enough to open my remaining bottles…