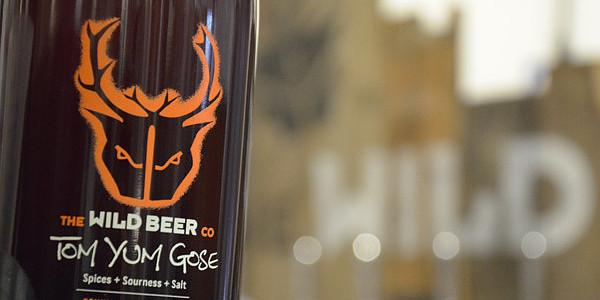 From time to time, when exploring the world of booze, you come across something that should not exist. While most of the time the initial reaction of horror is entirely justified, on rare occasions that first impression is wrong. Being the type of drinker that I am, I delight in both the things-that-should-not-be and the excellent exceptions, and recently I stumbled upon one of the latter. It’s not often that a drink so comprehensively worms it way into my subconcious, but on a recent trip to Bristol, one did – Wild Beer Tom Yum Gose.

One of my favourite cuisines in the world is Thai. I love spicy food, and the Thais’ combination of heat with citrus and pungent fish sauce creates a flavour explosion that I seek out. My favourite of the dishes that have made it from Thailand to the UK is hot and sour soup, tom yum. It’s a soup made lemongrass, lime, galangal, chillis and fish sauce, and combines all of the flavours that I love in Thai cooking. Mix that with beer and you have something that I had to at least try.

While on a recent fact-finding trip to Bristol, where my Whisky Squad colleague Jason B Standing required help in investigating the local hostelries, we came across Tom Yum Gose at The Famous Royal Naval Volunteer. We were quite a way into our extensive research mission, but a half of Tom Yum was my highlight of a day that included some excellent tipples. Since coming back to London the memory of it has sat at the back of my brain, urging me to find more.

While a tip-off led to a trip to Kris Wines that netted me a couple of bottles, it’s a very specific occasion that requires a full 750ml of the stuff, intense and distinctive as it is, and they remain closed. When it appeared on tap at BrewDog Shepherd’s Bush, picking up a growler to sip over the weekend was a foregone conclusion.

Somerset’s Wild Beer Co are well known for producing beers that on paper sound entirely awful. The existence of their Cucumber Saison, brewed in collaboration with Fyne Ales, almost led me to drunkenly ranting at one of the brewers at the European Beer Bloggers Conference 2013 – he heard me mention the beer from the other side of the room and came across to say hello, having not realised that I was in the middle of an impassioned indictment of new-fangled saisons – but, as with all of their beers that I’ve tried since, it turned out to be rather good. Especially if you follow the advice the brewer gave me, and add gin…

This time they’ve been swept up in the craft beer revival of gose, a German beer style that’s almost disappeared. It’s a sour and salty German wheat beer, usually with some coriander thrown in for good measure, and it’s the latest niche style to be championed by the new brewers. As a fan of sour beers, especially salty ones, it’s something I’m quite pleased about, but, as usual, I’m quite suspicious when brewers take a traditional beer and add their own twist.

Wild have brewed the beer with some of their collection of wild yeasts to give it an initial sour base, as well as added salt and coriander to keep it along the lines of a traditional gose. To that, they’ve added the chilli, galangal, lime, kaffir lime and lemongrass of tom yum, leaving the beer’s saltiness to take the place of fish sauce. The result is surprisingly tasty, and will especially appeal if you’re the sort of person who is obsessed with tom yum. Like me.

On the nose, it starts out with light brine and a big sour citrus note, with salted limes joined by more fragrant lemongrass and gentle gingery spice. While that doesn’t necessarily suggest it, it does still smell like beer, albeit a particularly salty sour beer. On the palate it turns into Tom Yum, with the salty-sour punch of the soup joined by a hint of chilli. On the finish it fades slowly from soup to beer again, with a refreshing citrus tartness taking over from the brine, leaving the palate refreshed.

It’s not a beer that I could drink much of, but the idea of a half before dinner as an aperitif strikes me as a good one – despite its intensity of flavour, it is remarkably refreshing, and certainly gives the appetite a kick. It’s a weird beer that shouldn’t work, but which does by doing exactly what you’d expect from its name: it’s hot and sour soup, but also beer. I suspect the memory of it will be hanging around in my brain for a while.