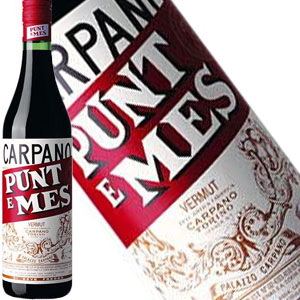 I’ve written in the past about my scepticism about the potential for bottle ageing high-alcohol boozes, but something that I’ve long understood is that things are quite different for lower strength drinks. This has been very much brought home by some of the Italian bitters and vermouths I’ve been able to try, thanks to my boss’s love of old liqueurs and aperitifs, and I’ve been meaning to have a bit of a taste test of my own for a while. While the market has realised that 1970s, 1960s and earlier bottlings of vermouth and bitters are worth some money, fortunately for me the 1990s still sound recent enough that bottles from the era are still reasonably priced. Digging through The Whisky Exchange website the other day I noticed that we had some 1990s Punt e Mes and grabbed one, as well as a more recent bottle for a bit of a comparison.

Punt e Mes has been produced since 1870, originally by the Carpano family, who are better known for Antica Formula, the canonical high-quality sweet Italian vermouth. The name, point and a half in Italian, has a number of potential ‘true’ origin stories, ranging from a celebration of a rise in the stock market, to the drink originally being one measure of vermouth mixed with a half measure of china bitters (heavily flavoured with bitter quinine) at the Carpano family’s bar. Whatever the reason, the Carpano brand was bought by Fratelli Branca, makers of Fernet Branca and Branca Menta, in 2001, and while Punt e Mes and Antica Formula continue to be produced, the former has now lost the Carpano from the label. 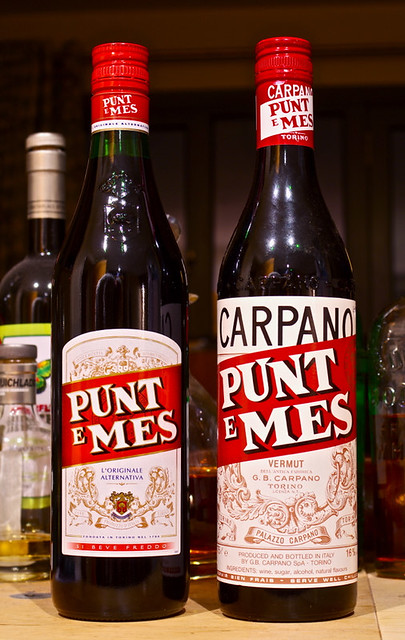 Punt e Mes is probably my favourite red vermouth, with a flavour that is accurately described in The Mixellany Guide to Vermouth & Other Aperitifs as “comparable to Carpano Antica Formula with a splash of Campari” – an intense sweet-but-bitter fortified wine, with some bitter orange and wormwood. I generally keep a bottle of both it and Gancia Rosso in my fridge at all times – the Gancia is light and sweet, the Punt e Mes heavy and bitter, and a mixture of the two can give me a vermouth profile anywhere between those two extremes.

My newer bottle (on the left in the picture) arrived in our warehouse in the last few months, so I assume it’s pretty much the most recent edition of the vermouth, but the older bottle is a little more problematic. It’s almost certainly pre-2001, as I assume the Carpano disappeared from the label fairly shortly after the company was acquired by Branca, but the only distinguishing mark is a ’91-93′ cut into the top right corner of the label. This punched-out approach to coding labels is quite common on older bottles, a hold-over from the days that a punch-out was easier than a print-over – labels are usually printed in large numbers and it’s a significant expense to reprint every time you need to change a batch number – although it’s not always the case that the numbers are years of bottling, no matter how tempting and plausible it is. However, in this case 1991-93 is probably a decent bet, based on the condition of the bottles and some more authenticated 1980s bottlings I’ve seen with slightly different labels.

They definitely look different, but how do they taste?

Firstly the new Punt e Mes: on the nose it had sweet liquorice and a hint of menthol, with sweet and sour cherries, linseed oil and sweet tobacco – rich and dark flavours with some molasses bitterness, restrained green herb and a touch of wood. On the palate it was quite oily and remained so, with intense cherry jam and cinnamon touches. Gentle green leafiness built around the side along with bitter orange, growing woodiness and cinnamon bark heat. On swallowing there was an immediate hit of bitterness, with bitter green grass and wood. Liquorice root and sweet liquorice then appeared, with some sweet cherry for a bitter and green finish, with some sugary sweetness.

I was worried the older bottling would taste just the same, but fortunately for the experiment it was quite different. The nose led with dried herbs and a sticky balsamic vinegar, with the acidity dialled back. Tarragon and twigs were the main herby notes, along with some dusty touches. Behind everything there was a bitter herbal base, but the upfront cherry and balsamic sweetness meant that it didn’t get too much. On the palate it was initially oiler than the new bottle, but it quickly thinned in the mouth. To start, the green herbs from the nose made themselves known, along with some bitter wood. Ruby-port-like sweetness comes through after those, with more maraschino cherries, sour red dessert wine and some malt loaf. The finish quickly became bitter, with sweet fruit fading to leave pungent green grass, woodiness and wormwood.

My goto mixed drink with Punt e Mes is a Gin and It – a mixture of Gin and ITalian/sweet vermouth. My other favourite vermouth heavy cocktail, the Negroni, involves the addition of Campari to gin and vermouth, which leads to a particularly bitter drink with Punt e Mes unless you choose your gin carefully. The simplicity of the two ingredient recipe (with my regular proportions being slightly more vermouth heavy than the more usual 2-1 gin-vermouth ratio) means that it’s easier to see the qualities in either the Gin or the It, without things getting too bitter. I’ve only got Tanqueray on the shelf at the moment, so Tanquery Gin and Its it was.

The new Gin and It had the liquorice hit of the vermouth, with some good sweetness up front, but with lots of woody bitterness behind. The Gin and It made with the older Punt e Mes was much sweeter, with a very oily texture and a hint of an almost petrol-like flavour – that’s something I’ve found in old bottles of whisky before, but I’ve not tried enough bottles of lower strength alcoholic drinks to say whether it’s common in them as well.

I’m not sure how much of the difference between the two bottlings is due to changes in production, especially as the brand has changed hands in the time between the two bottles being released, and what is down to changes in the bottle, but either way they are two quite different beasts. My gut feeling is that the reduction in overt sweetness and growth in complexity is a sign of bottle ageing, but it’s also a more old fashioned, herby take on vermouth, unlike the sweeter edge many drinks have these days, so I could well be wrong. I’m a fan of herby vermouths, although something like La Quintinye is going a bit far for my liking, and the older Punt e Mes strays down that path without going too far. Fortunately there are, at the time of writing, a couple more bottles in the warehouse. I will be buying them before posting this.