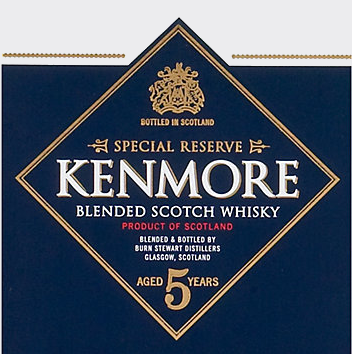 When it comes to own brand food and drink in the UK, there are a couple of shops known for being a cut above the rest. While Waitrose has steamrollered its way into the mainstream lead, there’s one pseudo-supermarket who has been doing the ‘posh provisions on the high street’ thing longer than most: Marks and Spencer. While my childhood trips to our local branch were focused on buying clothes (I am to this day almost exclusively dressed by M&S, due to a fear of all clothes shopping and Marks being a never-changing bastion of easy body-covering selection) they’ve been selling food and drink under their own labels since the 1920s.

Their booze selection is pretty decent, and I’ve quaffed many a bottle of rebadged and specially brewed beer over the years, however, I’ve never got my hands on their whisky before now. To start with, their blended whisky: Kenmore 5 year old. 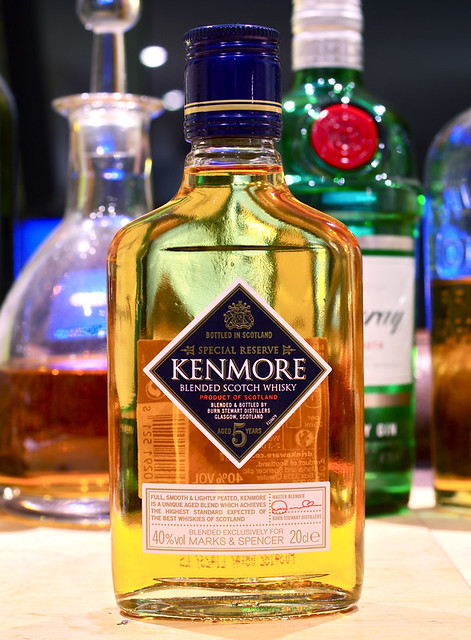 Kenmore seems to be named for a small village at the north east end of Loch Tay which has a number of distilleries nearby, including Edradour, Aberfeldy and Glenturret. However, unlike most supermarkets, Marks and Spencer are quite good at listing their sources and this whisky is thankfully similar, with a ‘Blended & bottled by Burn Stewart Distillers’ sat in the middle of the label. This is fairly unsurprising, as Deanston (owner: Burn Stewart Distillers) was a house single malt for Marks & Spencer for a while, itself a notable situation, as they rarely stock anything that isn’t under their own label.

While Burn Stewart own Deanston (40 miles from Kenmore), Bunnahabhain and Tobermory distilleries (far away from Kenmore and on west coast islands), I wouldn’t immediately jump to those three to make up this whisky. While single malts make up a good chunk of their portfolio, Burn Stewart are, like most producers, a blending company at heart. Along with the better-known-in-the-UK Black Bottle, they also produce Scottish Leader, the biggest Scottish blend in Taiwan – they are a much larger importer of Scotch whisky than most people realise, coming in 7th place in the import value stakes and 12th on the ‘bottles consumed per capita‘ leaderboard earlier this year. As Marks and Spencer don’t advertise Kenmore on its own, and the company’s usual advertising has me reaching for a sick bag, here’s the Taiwanese Scottish Leader ad:

Anyways, enough CGI eagles and zebra bums – back to Kenmore. The label describes it as:

Full, smooth & lightly peated, Kenmore is a unique aged blend which achieves the highest standard expected of the best whiskies of Scotland.

Which contains surprisingly little information, even for a whisky label. It has an ingredients list on the back, which greatly amuses me: Demineralised water, grain whisky, malt whisky, colour: plain caramel – I think that covers everything that you can add to a Scotch whisky before you are no longer allowed to call it whisky. So, we know that it’s an artificially coloured, grain heavy blend, which has been diluted to 40% before bottling. All in all, not surprising: it’s just the same as most other non-boutique blends on the market. Unfortunately, taste-wise it’s also not all that different to the others:

On the nose it’s got toffee and sherbert lemons, with a bit of sticky flapjack behind. On the palate it’s thin but creamy, with vanilla, nutmeg and some of the lemon from the nose, but sweetness quickly turns bitter, thanks to freshly cut oak notes. It has a fairly short finish, with rice pudding, cinnamon bark and clove.

An inoffensive blend, with less of a grainy character than I expected, but still a lot of obviously youthful spirit. It’s claim to be peated strikes me as an overstatement for anyone that’s tried anything more noticeably smoky. That’s not particularly surprising, given the recent price rises for peated whisky and the comparative lack of it floating around in the market: if Burn Stewart don’t have enough peated whisky to hand to continue to keep Black Bottle peaty (for more info, see my post on the matter), I suspect they won’t be putting much in a third party, semi-anonymous blend. In the end, it’s still drinkable, if unremarkable, and comes in at £16 a bottle, which gives you more money to spend on M&S’s decent range of food and drink.  That includes their single malts, of which more in a future post…

Kenmore 5yo
Blended Scotch Whisky, 40%. ~£16 exclusively from Marks and Spencer