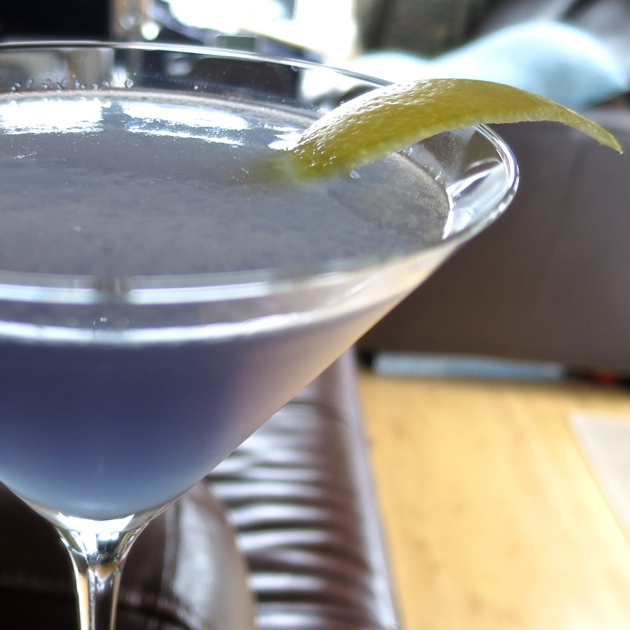 It’s World Gin Day again, which gives me another excuse to spend an afternoon drinking gin rather than tidying my flat. Last time I managed to write something for the day, I talked about the Negroni, still probably my favourite cocktail, and I’ve decided to go for another of my faves this time: the Aviation.

There’s a lot of bias against blue drinks in the cocktail world, which I suspect stems from the dual evils of blue curaçao and the 1980s. However, from time to time I like to indulge and an Aviation allies enough history and pretentiousness to overcome the fundamental blueness of the cocktail. Aviations seem to vary a lot based on who makes them and I haven’t quite come up with my ideal recipe as yet. As a base I use the recipe from the Diffordsguide Cocktail book:

Shake with ice, double strain into a martini glass and garnish with a maraschino cherry.

This makes a pale blue cocktail with a hint of violet, a balanced sweet/sour note and a nice ginny kick. It’s very fresh and definitely in the sour family of gin cocktails. The Difford recipe is based on the one found in Hugo Enslinn’s Recipes for Mixed Drinks from 1916, and the cocktail looks to have been created by Enslinn himself. The earlier recipe called for 2 gin/1 lemon/2 dash violette/2 dash maraschino, which would make a more sour and lemon focused drink, although, as ever with citrus in cocktails, it all depends on what the lemons were like.

By the time the 1930s rolled around, Crème de Violette was starting to get hard to find. This might have been due to Harry Craddock’s Savoy Cocktail Book dropping the Violette from the Aviation recipe, which in turn could be due to it being a hard to find ingredient already. In any case, over the following years it gradually disappeared from the market. However, in the late 00’s brands started reappearing and the classic cocktail revival did the rest.

I’ve got a bottle of Bitter Truth Crème de Violette, which is quite intensely purple compared to others I have seen, and has commensurately more violet-ness. I’ve been advised (by the folks at Rules, who made me the best Aviation I’ve tried to date) that the Bitter Truth is a bit too punchy, and they recommended that I cut it with a bit of vodka. It’s a recommendation I haven’t yet take up, but suspect I will when summer kicks in properly and I start making more Aviations.

Unfortunately, after deciding to make an Aviation I discovered that I was missing one rather important ingredient – maraschino. I’ve not been on much of a cocktail kick recently and I’ve not replaced my recently emptied bottle yet. Bad Billy, no biscuit. Or Aviation.

A quick google around led me to a classic variation on the Aviation, created at around the same time: 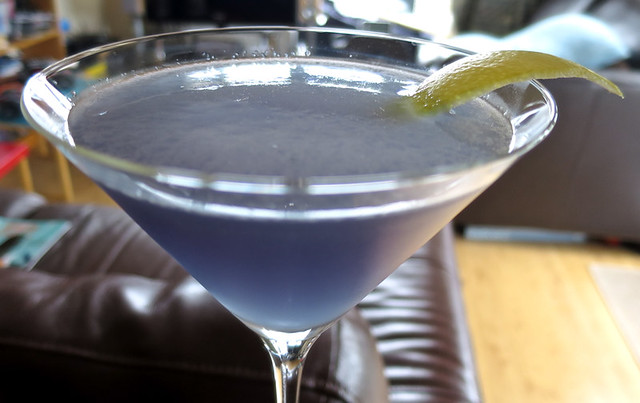 Yes, the incidence of lemony scum on the top of my cocktail does indicate that I need a finer strainer.
It is a very pretty blue, though.

Shake with ice, double strain into a martini glass and garnish with a lemon twist.

Yes, that is bascially an Aviation without maraschino. This almost looks like fate…

Originally, this would have been made with Crème Yvette, an until-recently-discontinued Violette-like liqueur. It added vanilla and spices to the mix, giving the liqueur a more rounded and interesting flavour, but also died out, along with violette, over the last century. The Blue Moon was, at one time, the signature cocktail on the back label of every bottle, and while it and the Aviation weren’t hugely popular cocktails by all accounts, they were definite mainstays of the pre-prohibition cocktail repertoire.

So, what was my Blue Moon like? Very lemony, without enough sweetness for my liking – while the violette is sweetened, it doesn’t have the heavy sweetness of maraschino, and this drink added together the citrus of the gin (Tanqueray) to the lemon and the citrusy touches that are found in the violette. Next time, I’ll make sure I have maraschino in stock…

1One element of Difford’s recipe that made me wonder was the inclusion of some chilled water – part of the reason why we shake with ice is to add dilution, so why add more water to start rather than shaking for longer? I asked about this on Twitter a few years back, and while the answers to those tweets now elude me, it comes down to how drinks cool when shaken with ice. Basically, you’ll hit minimum temperature fairly quickly (~15 seconds from things I have read) and at that point the amount of dilution will rapidly fall off – you’d need the drink to warm up before any more ice can melt, and you’re not going to be shaking long enough to get that to happen, 15 seconds is a pretty long shake as it is. As such, the Diffords recipe adds a bit more dilution at the initial stages to allow for this, assuming you are using good, cold, non-damp ice. I think. It was a few years back and I was drinking an Aviation at the time.

12 Replies to “Aviations (and Blue Moons)”