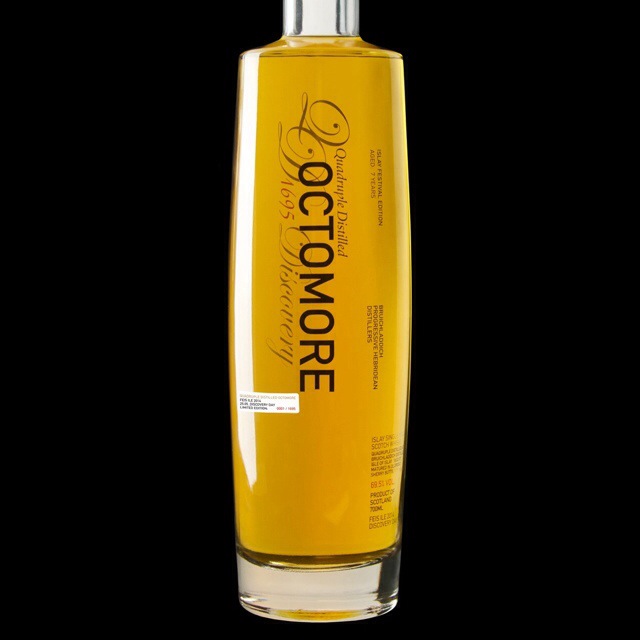 After years of trying, I’ve finally made it to what is often seen as an essential pilgrimage in the life of a whisky geek: I’ve come to Islay for Feis Ile – the festival of malt and music. Each distillery has an open day and at least one limited edition whisky, most of which are only available on the island. I’m staying a few minutes walk away from Bruichladdich and tried their Feis Ile bottling during their open day on Sunday, the quite ridiculous Octomore Discovery. 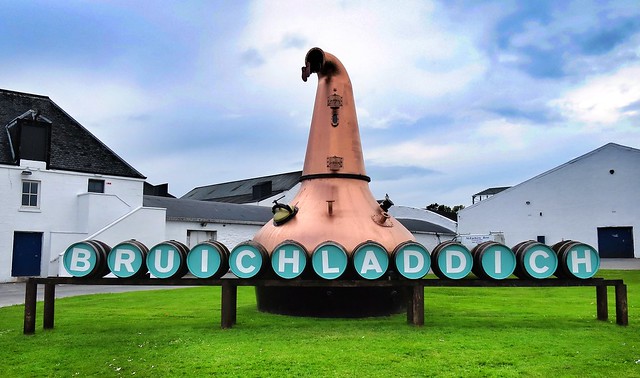 Bruichladdich, like a few other distilleries, have a selection of different brand names that they use for their whiskies. Along with Bruichladdich itself, both Port Charlotte and Octomore whisky also come from the distillery: Bruichladdich is unpeated; Port Charlotte is heavily peated; and Octomore is peated to ridiculous levels. For this year’s Feis Ile special release, they decided to go with something a little bit ridiculous.

The distillery is well known for their experimentation, with weird cask finishes and tweaks to production happening quite regularly, and one of those tweaks has been changing the number of distillations: two produces Bruichladdich; three made a spirit called Trestarig, which so far a seems to have only appeared in very limited amounts; four led to X4, so far released unaged and with three years in wood.

Back in 2007, they also decided to run the X4 process with an Octomore wash. Strangely for Bruichladdich, they’ve not given the peating level of the barley, unlike previous releases where it was printed on the bottle. However, based on the other releases distilled around the time it was probably just under 170ppm – the late 2012 5 year old was 169ppm, sandwiched by a pair of 167ppm releases. 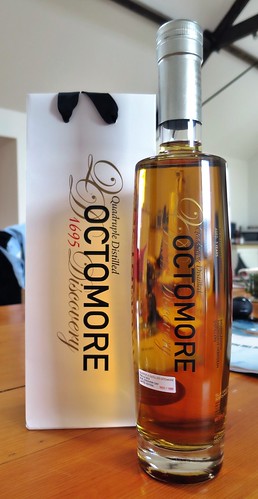 They quadruple distilled the spirit on 18 February 2007 and then matured it in oloroso sherry butts for seven years, bottling it quite recently and getting 1695 bottles. Being quadruple distilled, it’s got a bit of poke – it’s bottled at 69.5% ABV, and that’s after they’ve knocked it back with a little bit of water.

On the nose there’s sweet cream, lemon and pine, albeit it very pointed versions of all of those things, getting right to the back of the nose. There’s damp bracken, charcoal, wood smoke and muddy peat. To taste it’s very hot with lots of sweetcure bacon. With that there’s a big hit of peat, damp earth, green leaves, tree bark and aniseed spiciness, with an underlying bed of fruitcake. Water knocks back some of the heat, revealing more cream and bacon, although it stays hot and can take a good slug. The heat lingers into the finish, with more bacon, anis, peat smoke and char. It fades to bitter char and lemon zest.

My original reaction when tasting it was ‘it tastes like bacon and death’ with a follow-up from m’former colleague Tim being that it was like ‘bacon cooked in its pack’. On further consideration, it’s not quite so death-filled as I originally thought, but it is still very bacony.

Mostly, I’m impressed. Quadruple distillation should leave something akin to vodka, but this has obviously maintained a lot of the character of the mash, with the bacony smoke making itself clearly known. The surrounding flavour seems to have been ripped quite unceremoniously from the oloroso casks, but there is still some youthful spirit hanging around in there.

At £150 a bottle it’s certainly not cheap, but at £5 a dram at the distillery during the open day it was definitely worth a try. Expect to see lots of this on an auction site near you very soon…