I’ve commented in the past on how easy it is to pick up a fairly random selection of Polish beers from the random shops near my flat, one of the benefits of living in one of the most traditionally Polish areas of London. However, until now it’s been Polish beers from Poland, generally with little English on the can unless they’re a slightly larger brand that has made its way in via larger scale import channels. While trawling the shelves of yet another corner shop (there are a lot of corners around the Hanger Lane Gyratory) I came across something that was slightly different – a style that I’ve not see before from a Polish brewer: Żywiec Bock. 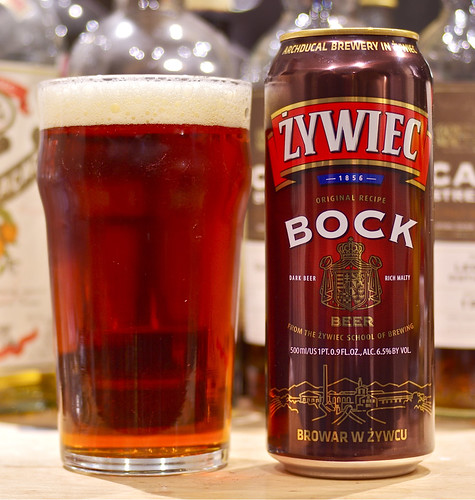 I’ve had various bocks over the years and they’ve never really been beers that have stuck in my memory. Darkish, lagerish beers with a sweet and malty body. I’ve just cross-checked my experience against Wikipedia and they say:

Traditional bock is a sweet, relatively strong (6.3%–7.2% by volume), lightly hopped (20-27 IBUs) lager. The beer should be clear, and colour can range from light copper to brown, with a bountiful and persistent off-white head. The aroma should be malty and toasty, possibly with hints of alcohol, but no detectable hops or fruitiness. The mouthfeel is smooth, with low to moderate carbonation and no astringency. The taste is rich and toasty, sometimes with a bit of caramel. Again, hop presence is low to undetectable, providing just enough bitterness so that the sweetness is not cloying and the aftertaste is muted.

Which is sort of what I said. Ish.

The most intriguing thing about these cans of Żywiec bock is their origin – the USA. The can was imported by Amtec International of Brooklyn and has, somehow, crossed the Atlantic again (if it ever made it to New York) to appear in a fridge in a shop in north-west London next to an excellent curry house. I didn’t even realise that Żywiec made it to the USA, but it seems that it both does and is vaguely popular. For a non-domestic beer.

As expected, there is a TV ad. However, unlike with many of the other Polish beer ads I’ve seen which are fairly straightforward, this time I have no clue what’s going on. Unfortunately my ability to transcribe Polish (something useful when trying to use Google translate) is minimal, so I present this to you entirely without interpretation. I’m especially intrigued as to why the Can-Can is involved:

“Ciemny i przyjemny” means “Nice and dark”, but other than that – translations and interpretations always welcome.

Anyways, what is it actually like? On the nose it has a bit of burnt malt backing up a big chunk of heavy malt sweetness – almost like sniffing a tin of malt extract, without the meaty Marmite touches. To taste it’s very sweet, with foam bananas, dark caramel and treacle-y touches, as well as a balancing sourness. It hangs around for a while, with some savoury chocolate malt notes and a bit of green leafiness.

All in all a beer that appeals to me rather more than I thought it would. While the fizzy yellow Żywiec is my go-to tinned lager, it is still a boring fizzy yellow beer. This takes the vaguely ale-y beer motif that I like and adds some sweetness without any complexity, making it the perfect companion to the regular Żywiec lager. Strangely, it reminds me of “beer drunk while on holiday in places that aren’t all that well know for ale”. Holiday beer drunk at home – win.

Żywiec Bock
Polish Bock, 6.5%. £1 a can in my local cornershop. Hopefully they’ll get more in…