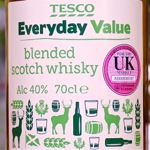 It worries me where simple questions can lead. “What is an average bottle of whisky?”, I innocently asked myself recently when the Scotch Whisky Association produced their yearly pre-budget report on how damaging spirits duty is to their industry. While I’m on the fence on lower alcohol duty, and am still working out what I think of Minimum Unit Pricing, I always like to see what the SWA say about the world of whisky, especially when they’re pushing for duty to be lowered in budget. One of this year’s headline numbers was that 79% of the price of an average bottle is now tax. “That sounds like a lot,” I thought to myself, leading inevitably to my earlier question – “What is an average bottle of whisky?”.

Working out the price of an average bottle, given that 79% of the price is tax, isn’t particularly hard. Tax on a bottle of whisky, as we see it at the checkout, is made up of two pieces:

In this year’s budget spirits duty was frozen, to support the whisky industry according to the budget speech. As such duty remains the same as last year, at £28.22 per litre of pure alcohol, and VAT is 20% on top of the tax-free price of the bottle after duty has been added. I’ve put together a spreadsheet to show these figures over here, but here are the numbers in the area of the SWA’s average bottle, assuming a 70cl bottle of 40% whisky:

I’ve highlighted a couple of rows above: let’s start with the darker yellow one. It shows the shelf price of a bottle where you are paying 79% tax – a bottle costing about £12.68. The 21% of the price remaining comes to a grand total of £2.67, which is split between all of the various people involved in producing and selling the bottle of whisky.

The way that tax is charged based on alcoholic content means that we get a very distorted total price. At the lower end the cost to the consumer is dominated by tax, with the minimum possible price being £9.48 (£7.90 of alcohol duty + 20% VAT with no money going to the seller), but, due to the non-changing nature of duty as price increases, it quickly becomes less significant:

I’ve looked for the source of the £12.68 figure for the average bottle of whisky and haven’t found much in the way of a derivation (an email asking for clarification has been sent to the SWA – no answer as yet), but assuming that it’s a simple mean it shows how powerful the lower end of the whisky market truly is. One of the things that we whisky geeks often forget is that we are a tiny part of the the whisky market, in both terms of how many bottles we buy, but also, it seems, by the amount we spend in total. Looking at the tax side of things, the relatively low tax rate for higher bottles is almost certainly ‘subsidised’ by the sales of cheaper bottles – not only does the single malt market exist as a side-effect of the demand for blended Scotch, but the prices we pay are artificially low thanks to the tax paid at the lower end. Which is an interesting (and almost certainly wrong) way of looking at things…

In honour of this, I found myself a cheaper than average bottle to try – Tesco Everyday Value Blended Scotch. The price of this bottle was £11.50 and it’s the light yellow row in the table above – an impressive £9.82 of tax, 85% of the cost of the bottle. With only £1.68 to share amongst the entire supply chain I’m not expecting all that much – I suspect it’s almost entirely 3 year old grain, with a touch of malt and enough E150a to stop it looking like a bottle of vodka.

On the nose it’s very sweet, with lots of toffee, as well as a hit of tequila-like pepperiness and some creaminess. On the palate it’s got lots of spirit and not a lot of flavour. There’s a touch of lemon oil, some fudge, caramel, green leaf sourness and a bit of charcoal bitterness – a bit like a mildy fruity tequila, without the pepperiness. It hangs around for longer than you’d expect, with spirity notes and a touch of green apple bitterness the only particularly strong flavour.

Strangely, despite the description above this is not entirely objectionable. It’s boring and not particularly flavoursome, but it’s not actually all that bad, all things considered. Mixed with a bit of ginger or poured over ice this, as is almost certainly intended, will provide a generic whisky flavour to a drink without being distinctive. I mixed both it and some cheap vodka with Coke, and the whisky was still easily discernible – it may not have much flavour, but it certainly beats out the world’s biggest white spirit. Not bad considering how much money is actually making it back to the people who made it.