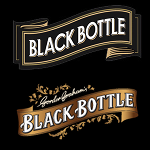 One of my favourite Whisky Squad sessions that I’ve run was Old and New, an evening of comparing old version of whiskies with their most recent incarnations. I liked it so much that I pestered Jason into letting me do another one, which took place a couple of weeks ago. It went pretty well, with an overly funky Bowmore Darkest causing a serious split in the room, and Aberlour 12 from the 1980s and present day both being appreciated. However, the first pair of drams I did were a bit of a cheat – Black Bottle from 2013 and Black Bottle from 2013… Old and new, in that order. A bit of a colour difference…

Brands do like to reinvent themselves, but it’s not that common occurrence for one to totally change their character. However, that’s very much what Burn Stewart have done with Black Bottle. Generally known for being an Islay heavy whisky, they have decided to move it back to its roots (or at least, so the marketing spiel says) and go for a profile influenced by the whiskies of the North-East of Scotland.

The brand started out in 1879, blended by Gordon Graham and his brothers, formerly Aberdeen based tea merchants. It stayed with the family until the 1960s, at which point it was picked up by Long John. It seems to have lost some of its heritage at that point, becoming ‘just another’ blended whisky, without much of the character that it was previously known for. In 1990 it ended up in the hands of Allied Lyons (who went on to become Allied Domecq before being bought by Pernod Ricard) when they bought out Long John, and they started developing the Islay-heavy form it is now best known for. In 1995 it was sold to Highland Distillers, who in turn were bought by Edrington in 1999. Black Bottle didn’t stay long in the Edrington portfolio and  in 1999 current owners Burn Stewart bought the brand, along with Bunnahabhain distillery on Islay.

The more Islay focused flavour profile appeared during the days when whisky was plentiful but in lower demand. It was a bit easier to get Islay whisky back then, which along with the increasing interest in peated drams led in part to Black Bottle’s success.  However, these days things are quite different – there’s not a lot of Islay whisky out there, and what you can find is increasingly expensive. Burn Stewart have the luxury of their own Islay production, with Bunnahabhain doing peated runs as well as their more well known non-peated whisky, but even so creating a smoky blend at the traditional Black Bottle price point has almost certainly become more difficult. While I don’t doubt that part of the transformation into the new form is driven by a wish to return to the older, more Highland and coastal profile of the blend’s beginnings, I suspect that a lot has been to do with supply, demand and pricing issues.

The old Black Bottle has long been one of my favourites, but I’ve not had a bottle in the house for a few years. On the nose it’s quite spirity and obviously young, but with that comes a rather nice freshness. It’s got sweet and sour lemons, hints of darker fruit, brine, metallic notes and a light gravelly smoke. Sitting behind that is light Golden Syrup sweetness. On the palate it was thicker than I expected from the nose, with syrupy sweetness, sour peat smoke, spice and caramel, with some light charcoal notes. It finished fairly short, with apple skin and a touch of char – not a lot to it.

It’s definitely not how I remember, although that could well be my increased experience of whisky since I last tried it. I remember it being peatier, with quite a bit of muddy smoke as the base flavour which everything else hung on, including a nice thin sweetness. I still quite like this old edition, but not as much as I once did.

The new edition definitely looks better, with the updated packaging harking back to the old black glass bottle of the 1990s and a generally olde worlde feel. Unfortunately, from there on I don’t have much nice to say. On the nose there’s freshly sawn oak, a hint of something medicinal and maybe peaty, a bit of polished wood and then brown sugar, caramel and Golden Syrup. Lots of it – really quite cloying. On the palate it’s got milk chocolate, ginger, woody spice, hints of sour apple and then the brown sugar, caramel and Golden Syrup from the nose again. Really sweet, and despite my love of eating Golden Syrup from a dessert spoon, a bit too much for me. Behind that sweetness there’s a lot of wood, with a touch of the overly sweet and spicy, unintegrated flavour I often find in small cask, new wood matured spirit – it’s one of my pet hates in whisk(e)y, and not something I can easily see past. It has a pretty long finish, with cinnamon spice, more freshly cut oak and an inevitable lingering syrupiness.

So, really not a whisky for me. The thick, concentrated sweetness puts me off, despite the other flavours hiding in there that I like. If you like a sweeter whisky then it’s definitely worth a try, but if you’re not after something quite so thick and cloying then you may want to avoid it. It went down pretty well at Whisky Squad, with most of the room really liking it, and I can see it’s decent whisky, but it’s really not for me.

There has been talk amongst some of the cynical whisky drinkers (you know who you are) that this first batch might be an anomaly, with it using older and more impressive whiskies in the mix to impress those switching from the old edition, or coming to the brand for the first time. Going with that is the assumption that future batches will drop in quality once people are hooked. I hope that isn’t the case, but see it as a good excuse to have another taste of the new Black Bottle a little further down the line. I like excuses.

When trying these two against each other there were two potential outcomes that I wanted to see:

1) I liked the new edition

2) The old edition was as I remembered it

Unfortunately neither came to pass. While that’s annoying from a drinking perspective it does mean that I don’t have to stock up on the old one before the current stocks finally disappear. Although it does mean that I’ll be looking for older bottles in auctions…

Black Bottle (old and new)
Blended Scotch Whisky, 40%. ~£20 (although the old version is starting to become more difficult to find and prices will almost certainly go up over time)