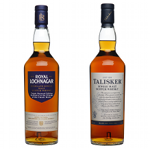 The last year has gone alarmingly quickly. 365 days ago I was in Canada preparing for a day of whisky tasting at the Victoria Whisky Festival and today I’ve been buying trousers and changing phone contracts. Needless to say that I’ve been rather jealous of those who made it over to Victoria this year, but their tweets and Facebook posts have also given me a kick to try some more whisky. So, I sat down with a couple of samples that I received from the folks at Diageo – the Friends of the Classic Malts exclusive Royal Lochnagar and Talisker Triple Matured whiskies.

The Friends of the Class Malts (aka FOCM for reasons of laziness when typing) is Diageo’s single malt fan club, focused around their Malts.com website and (more recently) their Facebook page. They’ve got all of the usual ‘members area’ bits on the website and send out regular newsletters, but as with other whisky fan clubs they do occasionally do something a bit more, including doing club exclusive whiskies – this is where the Talisker and Royal Lochnagar Triple Matured drams come in. Over time they’ve released a bunch of FOCM exclusive releases in various different ways, including a few through my employers, but this time the initial release has been through the distilleries and Diageo’s own rather posh online spirit shop, Alexander & James. The press release says that they’ll also appear elsewhere online, but I’ve yet to see them.

These first two whiskies are merely the first in a new line of limited releases, with the next three appearing between January and June. There’s not a lot of detail about how limited they mean by ‘limited’, but they do say that there will be a maximum of 24000 bottles across all five releases. Less than 5k bottles is definitely limited when we’re talking about a company of the size of Diageo – in terms of Johnnie Walker it’s almost a rounding error.

The Talisker and Royal Lochnagar are focused around a theme – Triple Maturation. It’s a term that annoys me, as it smacks of one-upmanship. ‘Oh, is that only double matured Talisker? Never mind, it’s not your fault that it’s not as good as my new Talisker triple matured…’, etc. Simply put, they’ve put together a couple of whiskies which have each spent their maturation in three different types of casks. The press release lists the casks as ‘refill’, ‘charred American oak hogsheads’ and ‘European oak refill casks’.

Diageo are the kings of accurate but tricksy cask specification and the middle cask intrigues me. They don’t say first fill (as far as I know pretty much all of Diageo’s first fill bourbon casks are used to mature grain whisky before being refilled with malt) so it’s almost certainly not, and the ‘charred’ implies either ex-bourbon or a de-char/re-char cask without being any more specific than that. However, such distinctions are just for the geeks (like me), what do they actually taste like?

I kicked off with the Royal Lochnagar, a distillery that I’ve not tried anywhere near enough from, despite urging from whisky loving chums who mumble about ‘underrated’ and ‘well-kept secret’.

On the nose it started sweet and earthy, with raisins and damp moss, but that quickly dissipated as it sat in the glass. This revealed sweetness and waxy fruit – cinnamon spiced apple and Portugese custard tarts – although there was also some sharp apple and some of the mustiness from the initial nose lingering in the background. On the palate it initially had sweetness and polished wood and continued with the oak motif. Woodiness piles on, with sharper oaky flavours developing into clove spiciness and apple skin tannins, backed by a touch of liquorice and shrivelled raisin. Balancing that was later appearing sweetness, with digestive biscuits and cinnamon toast. A drop of water (it’s bottled at 48%) knocked back some of the oak, bringing out more buttery flavours and some fruit. It finished long and spicy, with sweet apple, cinnamon and old polished wood becoming old polished wood, gentle sour plum and lingering toasted oak.

It’s definitely wood focused, but not in a bad way. It picks up the sweetness, spice and toasty flavours from the various casks without getting too bitter or astringent. If the woodiness is a bit much for your mood, then water kills that element of the flavour quite effectively, without affecting the intensity of the other flavours too much.

I then moved on to the Talisker, also bottled at 48% rather than their more usual 45.8% – the strength formerly known as Imperial 80 proof.

On the nose it kicked off with chocolate, ferns and wood smoke, with earthy peat, warm leather and a touch of musty bung cloth underneath. Along with that was a little bit of sweetness, although very much overpowered by the savoury flavours – a touch of orange oil and simple syrup. The palate was much softer than I expected to start, with gentle chocolate and muddy peat. However, spiciness builds, with nutmeg and cinnamon, although levels out to a mid-palate of earthy smoke, damp wood and gently numbing clove. Sweetness then builds, with dark chocolate and syrup as well as some spiky citrus oil notes. A drop of water rounds the edges off of everything, emphasising the more vegetal flavours – moss and spicy peat. It had a long finish, but it wasn’t overly powerful – sweet wood, gentle wood smoke and spiced apple fading to lingering polished oak.

An earthy and rich Talisker, stepping away from the recent Storm-style feistiness and more towards the new Port Ruighe. However, it doesn’t quite have the fruitiness of the latter, picking up some darker flavours from the casks, while still maintaining the freshness that you usually get from Talisker.

An interesting pair and definitely a series to keep an eye on. At £80 a bottle for each of them they’re definitely a more premium option, especially with the whisky community’s bias against No-Age-Statement whiskies still in full force, and time will tell how well they sell. The Talisker is still up on the Alexander & James website (complete with mispleled URL), limited to two per customer, but it’s the (soon-to-appear? I’ve not seen it available yet, although it’s probably on the shelf at the distillery) Royal Lochnagar that I think is the better of the pair. It’s certainly good enough to push me towards further exploration of the distillery.

Thanks to Diageo and Cognis PR for sending me over samples of the whiskies.

Update: It looks like, if this website is accurate, that the Royal Lochnagar is going to be limited to the distillery and Switzerland – 1500 for each. Which is annoying.