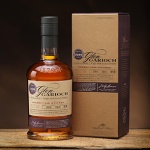 Sometimes you need to put your money where your mouth is. I write a lot about whisky at work but don’t get to taste all of it. Every now and again a bottle comes up that we don’t have samples of that I’m fairly sure is going to be good. I read around, I talk to people, I try to work out if I’m going to be right, but sometimes I have to get my wallet out and actually buy a bottle to find out what it’s like.

‘Unfortunately’ this happens with alarming frequency.

So, after the boss pointed out a recently released whisky that he thought I might like,  it went on my wishlist and I finally gave in last week, although not before telling other people about it on the work blog. The whisky in question is Glen Garioch 1999. Yes, I know you can’t see the whisky’s colour very easily. It’s nice and I drank the top of the bottle. See below…

Glen Garioch is up north of Aberdeen in the comparatively sparse, whisky distillery no-man’s land before you hit Speyside. While I’ve tried a bunch of their whiskies in the past, I’ve not said a lot about them here on the blog. Annoyingly it’s normally their older whiskies that I like, especially those from pre-1995 when they still used some peat in their malt (and malted at least some of it on site), and they normally cost a chunk of cash. As such the potential for a younger and more reasonably priced bottle rather took my fancy.

This one has taken a slightly different tack to other Glen Garioch releases and is fully matured in sherry casks – ex-oloroso to be exact. It’s the first one they’ve done (at least recently) that has been entirely matured in sherry casks and is the first in a range of small batch vintages from the distillery. While ‘Small Batch’ is a wishy-washy term that often inspires ire, this one is a relatively small batch for a distiller of the size of Glen Garioch, with only 1000 cases/6000 bottles available. It’s another whisky put together by Rachel Barrie, the Morrison Bowmore master blender, who seems to be pretty good with sherry casks – the Bowmore Devil’s Casks, the cask strength sherry matured 10 year old Bowmore released around the same time as the Glen Garioch 1999, flew off the shelves. However, this one has been a little more sticky. I blame the comparative lesser-known status of the distillery. An undeserved status. The Glen Gariochs I’ve liked have combined the distillery’s relatively heavy spirit character with mainly ex-bourbon casks to produce some great fruity flavours (orchard fruit in the newer and some tropical fruit in the peated ones). I’m starting to go through one of my infrequent sherry loveing phases, so I was hoping that this might slot in…

On the nose it was heavy and sweet. It kicks off with stollen with extra raisins and gets richer, with PX sherry, heavy fruitcake, sweet black liquorice and spicy cinnamon and clove. That all sits on a sweet and sour background of leather and balsamic vinegar. It also has a dose of the dreaded struck match, which I rather like here – it’s not too heavy and adds a nice weight to the spirit. On the palate it starts more savoury, with barrel char, stewed plums, apple skin tannins, bitter black liquorice and cloves. It gets sweeter, although never quite as much as the nose, with Eccles cake insides and malt loaf, balanced by some damp wood. It finishes with liquorice root, menthol touches, damp bark, forest floor rancio, dried apple skin and lingering fruit cake with burnt raisins.

It’s both what I thought it would be and not, with more of the orchard fruits coming through than I imagined but also with the big sherry cask punch that I was expecting. All in all, a happy punt, even if I had a sneaking suspicion that it would be.