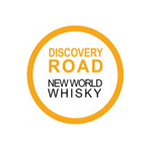 Dominic Roskrow is a busy man. He’s been writing about whisky professionally for the last couple of decades, but in the last few years he’s been involved in a scary number of projects. From editing magazines to starting the Craft Distillers Alliance, and promoting whiskies to starting a whisky and music festival, he’s had a large number of irons in the fire.

I met him back in 2010 at a rather posh tasting thrown in honour of his (at the time) latest book – The World’s Best Whiskies. Since then, he and I have crossed paths a bunch of times, from press jollies to whisky tastings (including a couple of Whisky Squad sessions – 1 & 2) and even working together. Well, I wrote a few entries for another book of his, 1001 Whiskies to Try Before You Die.

The last twelve months have been quite eventful for Dom, but he’s capped it with an adventure: he’s gone from writing about whiskies to putting out some of his own. Introducing Discovery Road – Four Lions and Smile.

Dom’s big thing for a while has been ‘world whisky’. From speaking to Dom and drinking the whiskies he’s been bringing along to festivals over the last few years that slightly wishy-washy term solidifies into an easy classification – “Whisk(e)y that’s not from Scotland, Ireland, Canada, America or Japan”.  When looking for his own whiskies to bottle he stuck with that idea and the first releases are from England (two under the name Four Lions) and The Netherlands (Smile & Dutch Courage).

The full range, so far…

I started off with the 46% edition of Four Lions – there’s also a 58% version. It was distilled by the English Whisky Company and is a marriage of four casks selected by Dom, English Whisky distiller David Fitt, and The Whisky Tasting Club‘s Tony Bagnall and Pat Barrow – two different sets of Four Lions to choose between for the inspiration behind the name. I’ve heard on the grape vine that the casks are not all just bourbon casks, and David’s love of playing with ‘interesting’ wood fits in with that.

On the nose I got butter icing and rose Turkish Delight to start, with sour apple, Mr Sheen and chocolate limes underneath. As it sat in the glass I got more caramel and lemons developing, with sharpness running through the middle. On the palate it started sweet, with spice from the alcohol. Behind that there was more of the sour apple from the nose, with caramel and touches of caraway and young spirit. I gave it a bit of a chew, which showed lots of woody notes, especially cinnamon and damp bark, as well as gentle minerality and a touch of raisin fruitiness. It finished quite sharp, with apple skin, drying oak and cloves, as well as some of the buttery icing from the nose. It lingered with damp wood bitterness, sherbert and a touch of lime peel.

This is straight down the line for English Whisky – decent young spirit with something interesting happening on the wood front. I wasn’t much of a fan of their earlier releases (with a bottle of Chapter 11 my first rather foolish foray into whisky investment – price increase: 0%) but having tasted some pre-release samples of their Chapter 14 and 15 at The Whisky Show this year I’m looking forward to seeing how things continue to progress.

The Smile is from Zuidam in the Netherlands – a seven year old rye whiskey matured in virgin American Oak. Zuidam are a distillery that I’ve quietly been a fan of for a while, having tried their 5 year old Rye back in the early days of the blog (and again in my second tasting box from Pat and Tony), and even brought their peated Millstone single malt along to the first Whisky Squad tasting that I led – the result: I liked it; noone else did. However, I’ve not had a chance to try anything else from them for a while and was looking forward to Dom’s selections.

The first note I have for the nose is ‘weird’ – when I gave the sample bottle a sniff when it arrived I was far from convinced. There was some strangely sweet juniper, lemon Fruit Pastilles and green grass to start, with a little bit of brown sugar behind. That didn’t particularly appeal but as it sat in the glass it revealed more in the background, with rye spiciness, cake batter and hints of dried fruit. There is also a little bit of nail vanish sweetness, reminding us that it’s definitely a glass containing alcohol. To taste things didn’t start off promising, with a definite over-the-top vanilla and spice combination kicking in, with sourness and bread – some of the classic flavours I associate with small, new oak barrel ageing, and some of the main reasons why I’m not a big fan of those kings of whiskies. However, a bit of perseverance was rewarded. Behind those flavours that I don’t like there was something a bit bigger and more complex, with a spot of chocolate appearing and a certain mouthwatering juiciness kicking in. There was cinnamon spiced apple pie and bread, with the cinnamon building up to Fireball gobstopper levels, before dying back to leave the apples and some black bread. It finished with cinnamon toast and a touch of drying wood, fading away to leave long and lingering apple skin notes, specifically slightly dried out Granny Smith peel.

An interesting pair of whiskies – one that shows how the English Whisky Company are getting along and one that left me confused. I’m still not entirely sure whether I’m a fan of the Smile or not, but I certainly want another try. I’m also not sure how much of a space there is in the market for small-scale indie bottlings of spirit from countries that aren’t traditionally famed for producing whisky, but Dom is certainly the sort of chap who will push us to find out.

Many thanks to Dom for the samples and pics.