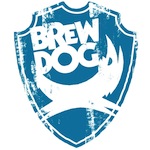 My obsession with BrewDog continues. It has, happily, morphed over recent time to not only be about their beers but also their bars, which I seem to find myself in on a large number of occasions. I am an occasional solitary drinker and like places I can hide with a pint while perusing the internet and tapping away on my portable keyboard, and when it comes to craft beer bars in London the BrewDog triplets are amongst the best for that. Especially now that there are three of them – the third opened recently in Shepherd’s Bush, immediately taking its place as my ‘local’1.

I popped in for a swift half on Christmas Eve and may have accidentally stayed for a few, emerging several hours later with a shiny takeaway tin filled with two pints of my selected Christmas day beer – Tongue Tied IPA.

It may say “Tongue Thai’d” on the receipt they handed me, but it seems that’s a name used by a number of other beers that had a similar idea – stick some Thai influenced ingredients in your brew and see what happens. From the vague bits I’ve seen online and an even vaguer memory of chatting with the barstaff on Christmas Eve (I had been drinking the most evil dark beers they had on tap – Brooklyn Black Chocolate Stout and Stone 12.12.12 Epic Vertical are mind-eaters) it’s a beer brewed by BrewDog’s all-female inhouse brewing team – the Brew Birds. Appropriately, the blog post linked there, announcing the team, was addressed to Melissa Cole, not only one of the women successfully challenging the “girls don’t do beer” stereotype but also the person behind the first Thai influenced beer I tried – her Otley collabarative brew, Thai-Bo. Complete with new silver Growler – a ‘snip’ at almost £20, empty. They do hold carbonation really well…

Tongue Tied seems to be an IPA with restrained hops, kaffir lime leaves, lemongrass and cardamon. It first appeared back in May so this looks to be a new batch, which is encouraging for those of us who, spoiler-alert, like it.

On the nose it’s really citrusy, with lemongrass, dried lime peel, unripe plum, ginger, sherbert, garam masala and some syrupy sweetness – it’s how I imagine a Thai-spiced sorbet would smell. To taste it’s quite light in body, but strung through with citrus – lots of lemon and lime (flesh, and dried and candied peel) on the palate with a little bit of spiced sponge cake coming in behind. On the finish, hoppy bitterness and sourness kick in with some festive spice – cinnamon and ginger.

I grabbed the Tongue Tied IPA on Christmas Eve because I was drunk and wanted some beer, but it worked rather well thanks to the appropriately-seasonal spicing. The light body combined with highish alcohol also meant that it was a nice aperitif that lasted me right through the afternoon until Christmas dinner. I even liked it enough that I’m now onto my second take-away growler and hope that it will be back again soon. In the meantime I will, of course, have to work my way through all of the beers at BrewDog Shepherd’s Bush on a regular basis. Especially the non-BrewDog ones – thats only about half of the 40 taps…

1 It’s a 15 minute tube ride and about 20 minutes of walking from my flat, which makes it preferable to the mediocre Fullers pub that I have 20 minutes walk from my door.