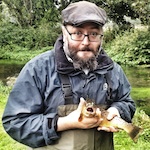 PR trips are often ridiculous things. Outside of the whisky world there is often craziness tangentially connected with whatever is being PR’d, followed by a goodie bag and a cab home, but my little corner of the PR system is generally a more sensible place. Having extracted myself from the world of computer games writing, an area where you can find yourself driving a tank just as easily as being force fed drinks at a free bar, before a) the money to do the crazy had arrived and b) I’d written anything about computer games that would have brought me to the attention of a PR company, I feel I’ve missed out. Thankfully I know the folks at Maverick Drinks and they’ve done their part to bring me into the realm of the insane press trip. I’d never been fishing before. As I’ve often claimed a world view that insists that I be able to bring myself to kill an animal if I want to eat it I’ve often been tempted, as fish seem a bit of an easy option compared to a belligerent looking turkey, but I’d never quite made it. John’s a keen fisherman back in the USA and the MavDrinks decided to let him play in the waterways of the UK, while dragging along a few whiskey-loving folks for the ride.

Cue an assemblage of bartenders and drinks writers at Waterloo station at an alarming hour of the morning with a train to Andover in our future. Fortunately Southern Trains are not adverse to some mild, on-train morning drinking. Eventually, after some mild party separation and transport negotiation to get us to the River Test, riverside positioning was achieved and rod-related instruction commenced.

On the fishing front I will only say the following:

We shall never speak about the waders again.

Smooth Ambler are based in West Virginia and distill vodka, gin and whiskey:

Having only been founded in 2009 they don’t have much in the way of old stock and on the whisky front they’ve complimented limited bottlings of their own young bourbon with some whiskies that they’ve sourced elsewhere and bottled under a separate brand – Old Scout. At the moment there’s no regular supply of their yearling bourbon, so Old Scout, showing off John and the gang’s cask selection skills, is the main brown booze of theirs available in the UK.

Whisky-wise the Old Scout range in the UK splits into bourbon and rye, with 7 and 10 year old bourbons, and a 7 year old rye currently available. The mashbill for the bourbon seems to be 60% corn, 36% rye and 4% malt, and the rye is 95% rye, which (after some Googling) suggests that the spirit is coming from MGP/LDI, the large Indiana based distillery that is quickly becoming the go-to place for many non-distiller-producers in the US. This is no bad thing.

The 7 year old bourbon has a heavy and intense nose of sweet maple and polished oak, with an underlying gravelly minerality and a touch of sourness. The palate is lighter than the nose suggests, with lots of brown sugar and caramel, minty rye spice, grassy touches and orange zest that touches on bitter orange oil. It finishes sweet and spicy with lingering tingly cinnamon.

The 10 year old bourbon is even more concentrated on the nose, with lots of sweetness, a little bit of mustiness, soft demerara sugar and a hint of Worcester Sauce. To taste it kicks off with mint and cooling menthol, spicy wood, soft caramel and a green leafiness. There’s a slight hollowness in the middle of the palate, but it’s note quite as intense as the 7yo. It finishes with candy sweetness, barley sugar and a hint of leafy mint.

I’m generally not a big fan of rye whiskey on its own, although I see it as a key cocktail ingredient, but I was pleasantly surprised by the Old Scout 7yo Rye. On the nose to start there was plasticine, maple syrup and earthy spices – dirty cinnamon and nutmeg. With some time in the glass it developed rum’n’raisin sweetness, touches of nail polish, Cinnamon Grahams and some spicy black pepper. To taste there was loads of spice – clove, cinnamon and peppery cardamon – mint and green herbs, and a touch of sour spirit. After siting for a few minutes syrup sweetness developed, although was pleasantly balanced by the woody spice. It finished with dark chocolate and more wood spices, sweet mint and a touch of freshly crushed rye grain.

While out by the river we tried a few samples that John brought with him from the US, and the casks they have acquired are definitely still ageing. There were six year old whiskies before this year’s sevens,  as well as the ‘Very Old Scout’ 14 year old, and there are rumours of even older whiskey hiding in their portfolio. Expect more releases once the MavDrinks collective can get them into the country.

Anyways, enough about whiskey – back to fish.

After catching my trout (Tony or Toni, I have no idea how to sex a fish), bashing it on the head and carrying it home, I proceeded to gut and freeze it ready for the weekend, following instructions from our fishing guide. After trying to work out what to do with it, I settled on something I’d been wanting to try for a while – smoking. A trip to Evans & Peel earlier in the year and a chat with ‘Beverage Inspector’ Marlowe Harris had landed me with a bag of pear-wood chips, originally intended to use for doing some wood ageing experiments but a very useful element when wanting to hot smoke some fish.

I put a small handful of chips in a baking tray, put my filleted fish on a rack over the wood, covered the whole lot in silver foil and placed the tray on my hob. A bit of heat later and I had smoke trickling out from the gaps in the wrapping. About 45 minutes later I pulled off the foil to reveal my fishy triumph: 42 Replies to “Fish and Whiskey with Smooth Ambler Old Scout”