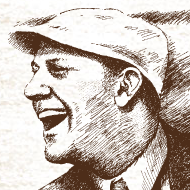 I’m not sure why I drink some of the things I do. They sit there on the shelf in Asda, staring at me, daring me to buy them. It’s unfortunate that I’m weak and like half decent looking labels with a matt finish. That final bit, the matt finish, is what pushed me over the edge to buy a bottle of this latest ‘I drink these things so you don’t have to’ candidate – Buddy’s Bourbon Flavored Beer with a Hint of Honey No.19.

I’m not sure if the No.19 is an official part of the name, but it’s on the bottle so in it goes. My first task when putting together this collection of words was to find out the truth behind the legend of J.W. Buddy, the creator of this beverage. A ‘boundary pusher’ described as ‘maybe the most popular man in Michigan’ during the early 20th century. He was also a lover of flat-caps, the single-handed ender of prohibition in the US, and both discoverer and namer of bigfoot. That’s what the website told me. He’s also made-up, although that only pops up in the commentary in the drinks press about the brand.

When it comes to cynical brand creation this is up there with the best of them. A quick ticklist:

The ABV is even 5.1%, 0.1% higher than most of the other flavoured beers – that’s some nice understanding of why the 18-24 market drink, right there.

On the back of the bottle there’s a note that the recipe has been licensed by Global Brands from Buddy’s Brewhouse in Michigan. Now, I’m not one to point fingers of accusation, but my Googling hasn’t turned up any mention of a brewer or establishment by that name anywhere in the world, let along Michigan. I would hate to think that it was merely an attempt to make this look like it wasn’t formulated in a lab after viewing some spreadsheets…

Anyways, what is the beer actually like? On the nose there’s a lot of honey – actual real stuff, straight out of a squeezy bottle – with a touch of sour grain. To taste it’s predictably sweet, with the honey flavour disappearing behind a wall of syrup. There’s also a bit of sourness and some sweet apple fruitiness, along with a slightly synthetic general fruit flavour. It finishes with the real honey from the nose, as well as a noticeable hit of green hops. The honey and hop are nicely balanced and there’s a little bit of spicy grain before it disappears.

All in all, sweet and cloying, but quite drinkable if that’s your kind of thing – Rocky would love it. The honey flavour does actually taste of honey, although the only ‘bourbon’ flavour is the generic sweetness that I also found in Dead Crow. It looks nice on the shelf (certainly better than Dead Crow and Desperadoes, but that’s not hard) and I suspect it’ll do pretty well in the supermarket.

JayDub, as I used to call him back in the ’40s when we lived together on the street and stripped houses of copper to buy methamphetamines, would be proud.

8 Replies to “Buddy’s Bourbon Flavored Beer with a hint of Honey No.19”