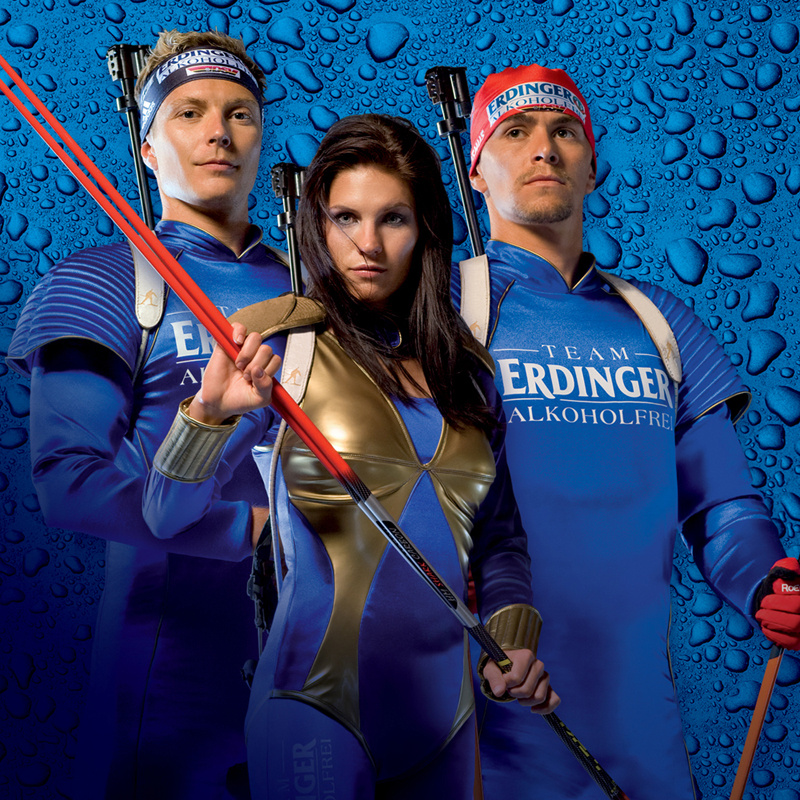 August has been a bit of a month. Three beer festivals, a selection of very boozy evenings and lots of random beer in my cupboard that ‘needed to be drunk’. So, after a couple of days of abstaining from the boozes, other than for work purposes, I stumbled across something of interest hiding on the shelf in Sainsbury’s – Erdinger Alkoholfrei.

Despite having had a youth peppered with drinking low alcohol beer as a dinner accompaniment (Swan Light and a random brand called ‘LA’ that I can find no definite record are the two that stick in my mind), I’ve stayed away from them since reaching my majority. However, this bottle ticked many boxes in my label loving brain, with many phrases carefully used so as to stay on the right side of the law, and a couple that I think might be a little naughty… So, what is this? It very carefully doesn’t say beer anywhere and also doesn’t say ‘alcohol free’. It may say Alkoholfrei (German for alcohol free), but it also says ‘Not alcohol free for the purposes of UK food law’ on the back. In the UK alcohol free is saved for drinks that contain less than 0.05% abv, but in other parts of Europe, including Germany, anything at 0.5% or less falls into the category. We do have a category covering 0.05%-0.5%, but ‘de-alcoholised’ isn’t the friendliest of terms to stick on a bottle. So, this tries to get around the labelling by using the German term rather the English and then sticking a ‘contains less than 0.5% alcohol’ on the front and the aforementioned disclaimer on the back. I think that’s a bit naughty.

However, the alcohol-content-side of things is nothing compared to my biggest surprise, and the thing that made me buy the bottle – what it actually ‘is’. This isn’t beer, it’s a refreshing isotonic drink, vitamin rich and with reduced calories. The back of the bottle goes further, talking about its folic acid and vitamin B12 content, as well as its role in fatigue reduction, promotion of an ‘energy-yielding metabolism’ and support of the immune system.

That all sounds a bit Lucozade-like and to support the product their website is all about sports-people drinking it after doing active things. Here’s an advert, featuring the most martial of winter sports – biathlon:

You can find their summer one, including the well known sport of roller-skiing, on YouTube.

From the nutritional information there’s 125 kcals per bottle (1/20th of an average man’s recommended daily calorific intake), which comes in a little below Lucozade sport’s 140 per 500ml and rather a lot less than a can of Red Bull (210), although that doesn’t even claim to be isotonic. If this drink, brewed to German purity laws, is isotonic, I suspect that makes most beer isotonic…

This is sat in the murky grey area of the drinks advertising world as far as I can see. It’s not an alcoholic drink, as it’s at most ‘de-alcholised’, so the people who normally look at such things with a critical eye are probably leaving it alone. However, it is making health claims for a drink that contains alcohol, which is normally a bit of a no-no.  You do also need to be 18 to buy it in the UK, as my waving at the bored attendant at the self-checkout, looking for someone to press the ‘Billy is an old man’ button on the till, demonstrates. Edit: m’colleague Rocky has pointed out that the 2003 Licensing Act doesn’t require a minimum age of 18 for beverages not exceeding 0.5% alcohol, as only beverages above 0.5% are classed as alcoholic. Mr Sainsbury is being more careful than he needs to.

Anyways, what is it actually like? It pours very fizzy, but with a solid head that eventually collapses down to a good creamy covering. On the nose there’s some fresh grain, sweet buttered toast and a touch of sour green hop. To taste it’s quite sweet and grainy up front, with a touch of spice and malt, buttered toast again, cardboard and some sour, bitter hops. The finish is short and sweet, with a bit of cloying malt.

All in all, surprisingly drinkable and something that I might pick up again. It tastes vaguely beery, although without the bitterness you might look for in a good continental lager, and even looks the part, thanks to its decent head. However, one thing to note is that while it tastes how you imagine a lager with the alcohol removed might taste, adding a shot of vodka does not improve it. I do these things so you don’t have to.