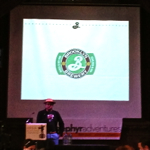 Brooklyn Sorachi Ace – Brought along to accompany the keynote from Brooklyn Brewery boss Garrett Oliver (and his hat). Garrett kicked the weekend off well, with a bit of “please don’t expect brewers to listen to you, they probably should be ignoring you” that I agree with – Dear Brewers, please ignore all things I say and get on with making your beer the way you want to. As I assume you already are. Love, Billy.

The beer is a saison (a beer style that I think I need to write about more angrily in the future – brewers, please ignore me), brewed using Brooklyn’s own Belgian yeast, bottled unfiltered after being dosed with a big pile of lemony Sorachi Ace.

Nose: Coriander, dill (as suggested by Garrett Oliver but definitely there), citrus hints and lots of ‘saison’-y notes – hay, estery fruit and floral touches.
Taste: Hay, coriander (to the edge of soapiness), lemon zest and a touch of anis.
Finish: Bitter green hops and freshly milled grain, with lingering greenness. Innis & Gunn Oloroso Cask – one of the next releases to appear from the company that kicked off the cask aged beer craze. They’ve taken 240 ex-oloroso casks that have already been used to mature whisky and filled them with a Belhaven brewed beer to mature.

The beer itself has been brewed using a mash of 5% amber malt, 20% malted wheat and 75% their usual ale malt. It’s bottled at 7.4% and you can definitely tell:

Inveralmond Blackfriar – A special ale from Perth’s Inveralmond Brewery, only produced 4 or 5 times a year. It’s brewed with lots of grain, with two mashes (with a total of 1000kg of grain) needed to fill their kettle. They also ferment it quite warm to aid in the production of esters, giving it more of a fruity malt character. Shepherd Neame Brilliant Ale – A third entry in Neame’s Classic Collection, resurrecting a recipe from their 1829 beer logs – a golden ale. They think the original was one of the first golden beers, the style of the time being for dark ales, and it’s been tweaked a little for the modern market – they’ve added in some Cascade for a bit more of a hoppy hit. While they wouldn’t have had reliable refrigeration back in 1829 this beer definitely needs some chilling – it’s light and almost lagery and needs to be cool to get the best out of it.

Nose: Buttery, light grain, crisp with a light hop bitterness.
Taste: More butter and some underlying fruity sweetness – definitely a Neame beer, with a similar body to their others, although much crisper.
Finish: Crushed grain, lingering lager bitterness.

West St Mungo – The flagship beer of the West Brewery, opened in 2006 in the east end of Glasgow. The owner is from Bavaria and they brew with some German tradition, including conforming to the purity laws. St Mungo is the only one of their beers I’ve tried as yet and it’s the only one that they currently bottle, although they are looking into expanding their bottled offering. Ilkley’s The Mayan Chipotle Chocolate Stout – Ilkley have been brewing since 2009, having resurrected the town’s old brewery which closed in XXXX. They normally brew more traditional English ales but have the Origins range to do slightly more crazy things – the conceit is that it’s all about bringing in flavours from around the world, in this case smoked chilli and chocolate. It was originally planned to be a celebratory beer ready for the end of the Mayan calendar, and the inevitable end of the world that would bring, but got pushed back thanks to Christmas demand for the regular beers getting in the way.