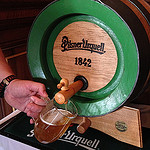 One of the main things I was looking forward to at the European Beer Bloggers conference was the chance to try some interesting things I wouldn’t otherwise find. The Sam Adams Utopias ticked that box early and the Toccalmatto beers carried on the theme, but the dinner at the end of the first day held a surprise for me – a pair of beers from Pilsner Urquell.

I’m not enough of a beer snob to eschew all forms of mass produced yellow fizzy beer, but I’ve not really gone near Pilsner Urquell. Jeff, landlord of The Gunmakers, sings its praises and I’ve been meaning to give it a try over my regular Polish tins, but I didn’t get a chance until #EBBC13. It was a different chance to that which I was expecting, presenting both the regular lager as well as an unfiltered version. Poured from a wooden cask… Guess which one is unfiltered

One of the key USPs of Pilsner Urquell in the past was that it was lagered in oak casks for three months before bottling/kegging/etc, a practise which has since been discontinued. However, they still store some of their beer in wood and Vaclav Berka, brew master at Pilsner Urquell, assured us that they do regular taste tests to ensure that the character remains the same between the cask aged beer and the tank aged beer (aged for about 1/3 to 1/4 the time). Take that with as large a pinch of salt as you feel you need.

Along with wood ageing they also release a small amount of beer in wooden casks, something rarely seen in the brown beer world, let alone the yellow fizzy beer one. With no filtering and no added CO2 it’s about as close to pre-modern lager as you’re going to find, and Vaclav brought a few casks along to the opening night #EBBC13 dinner. Tapping them took a bit more care than the average cask of ale, especially as it was the hottest day of the year in Scotland (high 20s degC) and they’d only recently been rolled off of a plane from the Czech Republic. Rather than the traditional spile that you see in the UK, they instead used a bent metal stick with a wooden handle, which was hammered into the top of the cask and then moved around to let more or less air in as the tap was opened. There may not have been any added CO2 but there was definitely a bit of pressure in the barrels, as the jets of foam coming out of the spile holes (shives?) when they were tapped let on. I hope the paintings on the walls of the City Chambers weren’t expensive or at least wipe clean if they were… (Here’s a video of it being done elsewhere, with a much lower ceiling).

Update: Here’s a video from the Pilsner Urquell folks of the evening – see if you can spot the potential property damage…

The regular Pilsner Urquell was exactly what was needed on a hot day. On the nose it had buttered toast, freshly crushed grain and streak of hoppy bitterness. To taste it was sharply hoppy with lots of fizz and bitter, grapefruity citrus. It finished with grain and more lingering bitterness. Packed full of Saaz hops and actually tasting of something it was rather tasty, especially when poured with a nice big ‘Czech-style’ head to amplify the bitter notes (as I learned at a Stella tasting a while back).

The unfiltered was quite different, although there were enough common notes to see how the beer goes from one state to the other. On the nose the grainy bread was still there but the hoppiness was much crisper. To taste, however, it was very soft – almost no fizz and no CO2 sourness with it. There was a big hit of green hops followed by a buttery hit, soft graininess and a gentle vegetal hoppiness. The finish, however, was where all the action was – lots of grain and then a big burst of bitter green hops, which died down to leave a lingering bitterness along with crushed grain.

I now have a couple of bottles of regular Pilsner Urquell in the fridge, so the dinner worked on me that much. I’ve heard tales of scepticism over whether the beer is as good as it used to be, but for the time being it’s good enough for me when it’s hot outside. I better get drinking before the sun properly goes away…

For more info on Pilsner Urquell and how they make their beer, there’s a rather detailed article over on MoreBeer.com pulled out of a 1997 edition of Brewing Techniques magazine.

Pilsner Urquell Nefiltrovaný (Unfiltered) from Wood
Czech Pilsner, 4.4%. Not generally available outside of the brewery tour.