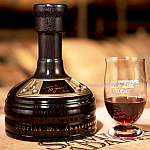 Of all the tasty beers I got to try at the European Beer Bloggers Conference this year, there’s one that stood out for a variety of reasons. Foolishly, it was also the first beer that I tried at the conference and it presented a hard act to follow in both flavour and craziness of production – the barrel aged Sam Adams Utopias 2012.

Sam Adams are becoming increasingly known in the UK, thanks in part to their beer being imported by Shepherd Neame and thus hitting a lot more pubs and bars, but there’s a lot more to them than their Boston Lager. In the US they have seasonal brews on the market throughout the year and you can find if you look around in a decent beer shop or online. However, the Utopias is a very limited edition release that only appears every couple of years. Presented in a decanter that looks like a beer kettle. It’s quite heavy…

Utopias takes the idea of barrel ageing a little further than many beers, with long maturation times and interesting cask selection the order of the day. The base is a selection of beers which have all been aged in wood and in many cases been further finished in different casks before bottling. The various components are selected and blended to produce an intense and complex final beer.

2002 saw the first release of Utopias and the 2012 has been created as a celebration of its 10th anniversary. They don’t give a full breakdown of the blend, but it includes a number of different beers, as well as their original Triple Bock, now up to 21 years in cask. Wood-wise, they used ex-bourbon casks for initial maturation, followed by a selection of finishing casks including tawny and ruby port, and Nicaraguan rum.

Along with the story of its ageing there are two extra factors that come up a lot when discussing Utopias – its strength and its price.

Firstly, strength. 29%. It takes some effort to get a beer up to that strength, as regular yeasts star conking out at significantly lower levels. However, they’ve used a champagne yeast that’s hardier than most to kick out more booze before the beer goes into the casks. However, I suspect there’s a bit more at work than simple fermentation.

The “Angel’s Share”, evaporation from the cask often mentioned when discussing cask matured spirits, also takes its toll on beer and other lower strength barrel aged drinks. Water and alcohol will both evaporate from the cask, but how much of each depends on the contents of the cask and the conditions where it is stored – simply, higher humidity can lead to more alcohol evaporating, whereas dry conditions can lead to water evaporating at a faster rate.

I think it’s this latter situation that helps Utopias hit its impressively high strengths and intense flavour. Over time more water than alcohol evaporates, both increasing the strength (although to a much lesser extent than you will find with some whiskeys) and concentrating the remaining liquid, adding to the intensity of the beer’s flavour.

This leads into the second thing that is often mentioned – its price. The 2012 has an RRP of $190 for a 330ml bottle and earlier bottlings sell at auction towards the $1000 mark. That kicks it up into the ‘one of the most expensive regularly produced beers’ bracket and would be quite silly for a bottle poured and drunk in one go. Fortunately, the high strength not only allows it to last for a while after opening but also points to a more measured approach to consumption, in the manner of an expensive tawny port or distilled spirit.

The liquid has been in casks for a good while, exposed to the air throughout that time, so a few weeks in an open bottle shouldn’t affect it too much, although it will change faster after opening than higher strength spirits. The high alcoholic strength should also help to preserve it, so it should keep a good long while. To help with that they present it in a rather ornate and chunky decanter, resealable after your pop off the cap for the first time and the sort of thing that you’ll want to keep a hold of if you get one.

Flavour-wise, it’s also not a drink to throw down your neck:

Taste: Intensely sweet and nutty to start, like a syrup dosed room-temperature dry sherry, with sweet raisins and a definite alcoholic punch. Lots of oak rolls in, with dark wood, blackcurrant leaves, rich berries and spice. That’s balanced by plum wine, dried cherries and a touch of blackcurrant Hall’s Soothers.

Finish: Liquorice and blackcurrant sweets, cherry Soothers, nutty yeast and almonds. It hangs around for a very long time (long enough that it cut into my beer tasting time before the conference properly started), with bitter oak slowly making its presence known as the other flavours fade.

An impressive drink that I find difficult to classify as a beer in my head – it has the thickness and body of a liqueur and is more reminiscent in flavour to sherry or port. The effort that goes into making it is impressive and while I won’t be able to justify the ~£200 the handful of bottles that have made it to the UK will each most likely hit, I do hope that at least a few go to bars that will sell it by the measure. Hopefully I’ll be able to find one and have another taste.